2 Must-See Shows At The Vault Festival

The Vault Festival is firmly underway, and we hope you managed to catch the phenomenal Greywing House. If not, that’s sad. But the good news is that the Waterloo-based festival still has some great shows to catch.  Here’s two we’re looking out for: 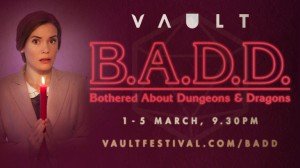 The 1980s. America is gripped by Satanic Panic.

Secret rituals and devilish practices are taking place across the country, destroying the minds and lives of the American youth. But the most diabolically terrifying threat of all is Dungeons & Dragons: for some just an innocent role-playing game, but viewed by many as a gateway to corruption, violence, and SATAN. Thankfully, the forces of good are fighting back…

You are invited to attend this inaugural meeting of B.A.D.D. (Bothered About Dungeons & Dragons) to learn how best to protect your children from the clutches of the occult.

Written and performed by Carrie Marx, BADD is a darkly comic presentation on the multitude of Satanic threats hidden in seemingly innocuous everyday objects and media. It is part theatrical lecture; part participatory brainstorming session.

You can grab your tickets to B.A.D.D here.  There’s also a 2 for 1 offer running if you buy for the Wednesday, Thursday or Sunday. 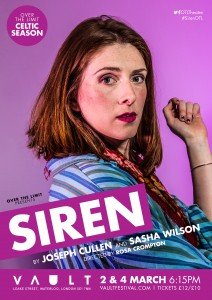 There is more to Eleanor and Stuart than meets the eye. They need a place to stay for a while, somewhere quiet, somewhere nobody would think to look for them.7

Stuart arrives first, naturally – early as always. Then her, keeping her own time. They stand at the reception desk waiting to check in and nod to each other in that way that strangers would. It appears they don’t know each other, except of course they do. They should be keeping a low profile after Eleanor’s last “accident”, but boredom and vigilantism are hard to keep at bay.

From the warped minds of Joseph Cullen and Sasha Wilson, a dark comedy of macabre proportions, SIREN is viciously sharp and unrelentingly bleak – leaving audience members squirming in their seats. We see the real-time events unfurl as Eleanor and Stuart effortlessly put their mark through his paces and get him right where they want him.

Inspired by the Welsh Legend of the River Conwy Afanc, SIREN delves into the depraved psyches of this young couple, and as their battle for dominance and one-upmanship sees their own relationship disintegrate, SIREN becomes the ultimate confidence trick and leaves us questioning: who is the real monster?

Brought to life by award-winning theatre company Over The Limit, SIREN forms part of their Celtic season at VAULT 2017, alongside THE WITCH’S MARK and THE LOCK IN.

Previous Praise for Over The Limit:

‘This performance approaches brilliance’ EVERYTHING THEATRE

‘A little gem of a production. A remarkable story, beautifully realized.’ REMOTE GOAT

Winner of the 2016 VAULT Festival Spirit Award for GENTLE TIM

You can grab your tickets to Siren here.