St Valentine’s Day is upon us.  A time for red roses, chocolates, candlelight dinners and giant cards declaring your love for a special someone. 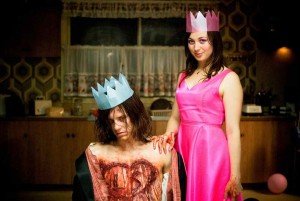 Ugh, enough already.  Ok, so I’m not a total humbug about today, but I don’t need card and confectionery companies telling me how and when I should be declaring my love for another person.

Last year my boyfriend surprised me with a beautiful Valentine’s gift, which was really nice, but the best way he can express his love for me is by joining me in watching some beautiful horror.  You see, he hates horror, so I would firmly class this as the most romantic gesture he could make.

So as a tribute to all horror fans out there, I have compiled a list of the best Valentine horror films to watch tonight, for all different types of relationships…

An old folk’s tale about a deranged murderer who kills anyone who celebrates Valentine’s Day turns out to be true when a group of teenagers throw a party and start being bumped off.

Don’t bother with My Bloody Valentine 3D, stick with this far superior original from 1981.

This film suits all relationships as it’s the ultimate Valentine’s horror.  It has candy, kissing, a party and a lot of murder.  What else could you possibly need?

A group of female friends find themselves being stalked by an unknown assailant in the lead up to Valentine’s Day.

Now I know a lot of people will groan about the fact that I’ve included this film but, honestly, I find it very entertaining.  This horror is best for those who are single so they can enjoy the abundant “totty”.

High school student, Brent soon regrets turning down his classmate’s prom invitation when she concocts a brutal way to make him hers forever.

I love this film.

It has messed up characters, great acting, torture, an emotional underscore, and a great take on the classic prom style horror.

If you’ve ever been jilted or are feeling angry about a recent break up, this film should help satisfy your mood without you having to take the drill into your own hands…

Chucky is back for a fourth outing and this time he’s got a little killer help from his girlfriend, Tiffany.

I love the Child’s Play films (we won’t mention Seed of Chucky) and I’m eager to see the next installment.

Bride of Chucky is my favourite, as I love that our anti-hero gets a partner in crime to play with.  And the havoc they wreak on those around them is gross, fun, and features some very inventive kills.

If you’ve been with your partner for a while, and you both enjoy sick comedy, this is the horror film for you.

This horror-comedy take on Romeo and Juliet, follows a zombie whose encounter with a human helps to restart his heart.

This is a very sweet horror comedy that will suit those couples who are in the early throes of a relationship.

Before your faults (cold skin and a diet of human brains) get in the way of the butterflies in the stomach feeling (or is that undigested brains?).

Candyman, a murdering urban legend with a hook for a hand, is summoned to the real world by a sceptical grad student.

Candyman is one of those horror films that has always haunted me.  I love exploring urban legends and myths and Candyman is a truly terrifying one.

This film is perfect for sharing with your partner who is difficult to buy presents for.  If they’re anything like me they’ll appreciate this scary tale much more than a box of chocolates.

A couple return from the dead to find their beloved house occupied.  They enlist the help of bio-exorcist, Beetlejuice to help them scare the family away with malevolent consequences.

Beetlejuice is a very accomplished horror-comedy with great special effects, a fab cast, and a great story.  This horror is perfect for couples who’ve been together for a long time, and find themselves still very much in love.

The central couple in this film have a very sweet and tender relationship that shines through amongst the gross horror and scary antics.

This is definitely a must see.