Beverley Price is a writer that hails from a small town in Carmathenshire, Wales, who has had a complicated relationship with horror since a child. While viewing of horror films was something that was discouraged in the childhood home, the odd TV series slipped though. Early childhood memories include Ghostwatch and Are You Afraid of the Dark?

What was encouraged was a love of books, and that was where the love of horror first grew. Starting with the ‘Point Horror’ series, before moving on to Christopher Pike and Stephen King. Beverley found an escape, even now through the works of Dean Kootnz, James Herbert, Shaun Hutson, and Ramsey Campbell.

As well as the London Horror Society, Beverley is also a three times winner of the title “Chief Poet Skald of Suffolk”, a local eisteddfod.  She has had a poem published in an E-book called “Poems from Beyond the Grave” and “Serial Killers – A Pizza Eaters Book” and her own poetry book “The Flowering of the Black Petal” and “By Ink, By Pen, by Paper: A Tribute to Black Petal” under the alias Stormy, as well as a novel, “Blood Bound”.

Beverley is particularly known for her love of cheesy, overlooked, weird horror films, but has a wider enjoyment for horror around the world. With films like Train from Busan, Troll Hunter and Suspiria often topping the list of best films.

Beverley is always open for conversations about horror, and the weirder the better – @Stormywriter2 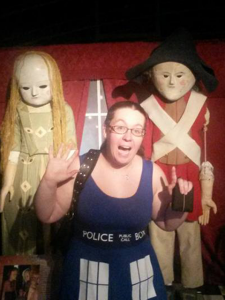 A Clockwork Orange has a different history when it comes to being banned in the UK. It was Stanley Kubrick himself that...

Early Hammer Horror was known for their Dracula and Frankenstein films, but they did branch out into exciting one-offs. One of those...

If the film’s villain is an undertaker from Hell that reanimates corpses into zombie dwarves, then, of course, the hero is an...

The Last House on the Left had been banned for 30 years and would not be released uncut until 2008. The film...

Hammer film production was starting to become an assembly line, making horror film after horror film at an alarming rate. Amongst some...

There is a reason that 70s films are often seen as a drugged fuelled nightmare, and this one is no different. An...