We are SO proud to finally be able to announce the creation of our brand-new short horror film, BLACK MASS.

This will be the latest project from British writer/director Scott Lyus who has a real pedigree in indie horror, being responsible for the festival hits Silently Within Your Shadow and the award-winning Echoes of the Passed. 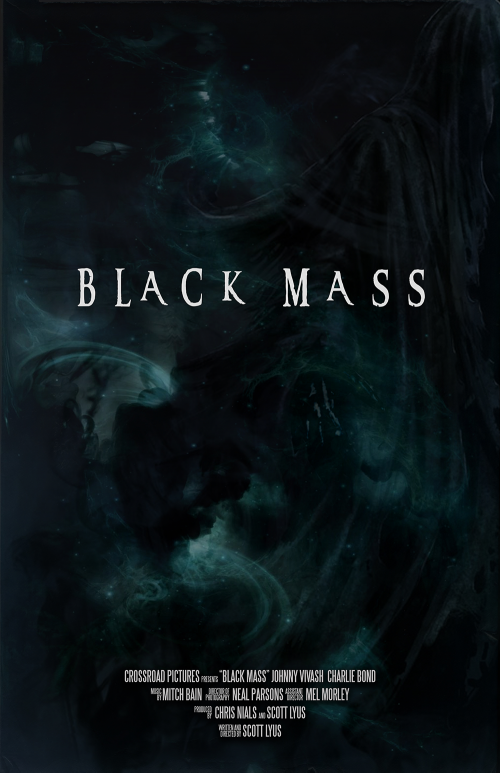 Black Mass is a dark and atmospheric story about a demonic presence that haunts a bereaved father and his two adopted daughters.

The film promises to be Scott’s most ambitious project to date, and he has assembled an incredible cast and crew to bring it to life.

In his own words:

Black Mass is born out of my own personal battle with depression and the depths it has taken me to. For me, it has been the darkest and scariest period of my life, and while it’s a battle I still suffer with, it’s something I’m ready to be open about and help shine a light on.

The story is a passionate take on a very tough subject, and I don’t want to shy away from or sugarcoat what people with depression go through. That’s why I think horror is the perfect genre to explore that story. I promise Black Mass will be the scariest and darkest film I have ever made.

Taking the lead roles will be JOHNNY VIVASH and CHARLIE BOND – two people with an incredible acting pedigree.

Johnny has featured in multiple award-winning productions such as Book Of Monsters, Charismata and The Creature Below, while Charlie has been a stalwart of British indie films, having appeared in The Rise & Fall of a White Collar Hooligan, Hellriser and King Lear.

The film will be produced by both Lyus and the production arm of The London Horror Society, and the Director of Photography will be Neal Parsons, who was part of the crew behind 2017’s Oscar-winning short film, A Silent Child.

There will also be further announcements shortly on casting for the second daughter, and also the team that will be bringing the demonic presence to life – through a mix of practical special effects and world class VFX.

The film will be funded by a mix of personal investment and crowdfunding, with the Kickstarter campaign launching on Friday, March 1st.

In order to give fans a better idea of what they can expect, we have released a short concept trailer.

We’d be eternally grateful if you could help spread the love and help enable this incredibly exciting project to come to life.