Banned in the UK: Onibaba

The film was initially banned in 1965 by the BBFC, but a heavily edited version was allowed an X certificate in 1968. However, since the VHS release in 1994, all versions have been released uncut. Perhaps for many people, this is the only film of Kaneto Shindo that they will have heard of. 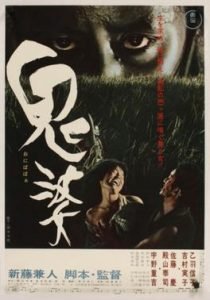 Onibaba gives us the exclusively troubling ambience in its period styling. Set during the 14th Century, the story follows a scheming woman and her daughter-in-law, whose husband has disappeared as part of the ongoing civil war.

Shindo based Onibaba on a Shin Buddhist parable: an elderly woman is disappointed in her daughter-in-law for never doing the housework, preferring to go to the temple and pray. To stop this happening, she hides in a bush, and when the younger woman passes, she jumps out wearing a demon mask to frighten her. Buddha is unhappy with this deception and sticks the mask to her face. When she begs for it to be removed, all does not end well.

Onibaba is part of a decade long change that was happening with Japanese Cinema. Through his own production company Kindai Eiga Kyokai, Shindo was able to sidestep the stringent, self-structured Japanese film industry. Because of this, we got such films as Yasuzo Masumura’s Moju (Blind Beast) and Nagisa Oshima’s Ai No Corrida (In the Realm of the Senses).

This parable in Shindo’s hand becomes a suggestive noir version of emotional horror which is superbly rebellious, instinctive and accurate to the source. Shindo, as someone who lived through the Second World War, had first-hand experience of the horrors that war brings.

As mentioned, we are in war-ravaged 14th Century Japan, where the men have been taken to be soldiers. We focus on two women, an older woman and her daughter-in-law, played by Nobuko Otawa and Jitsuko Yoshimura.

To survive, they murder either renegade Samurai deserters or lost soldiers. They strip their victims of their priceless armour and embellishments to be sold, and the bodies are dumped in a pit which becomes a large tomb. 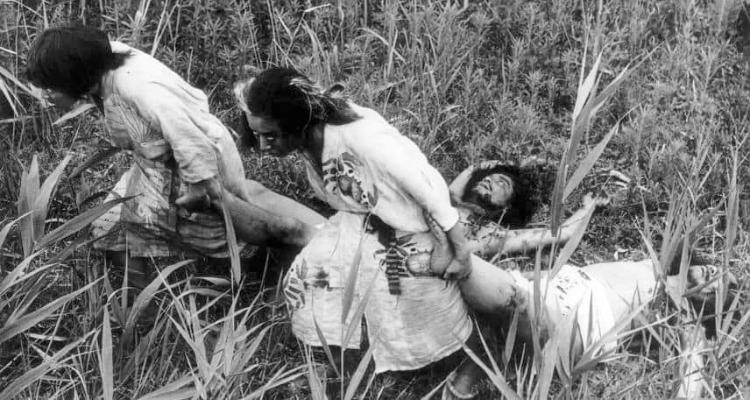 All is going well for them until the appearance of , who was drafted along with Kishi – the younger woman’s husband and older woman’s son. His appearance sparks an explosive mixture of heightened anxiety and scepticism in these women. He is clearly yearning after the younger woman. Once revealed that her husband was killed in action, she becomes aware that she will be alone for many years, and submits to his advances.

Hachi, however, dismisses the notion of not only demons but the reality of Buddha, and convinces the young woman to continue the affair. 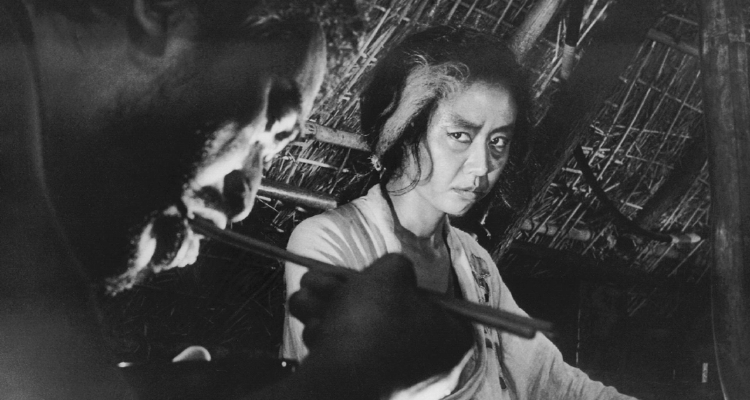 Once the truth of the mask is revealed, the young woman becomes angry about the mistreatment. But both are villains, as they have countless deaths on their hands, even if they justify it as a mode of survival.

Shindo shows us a tight, tense drama in a gripping mood of immoral horror. It is exquisitely shot in black and white by Kiyomi Kutoda and with a superb soundtrack by Hikaru Hayashi. Saxophones reverberate the sound of the wind in the reeds, with ancient drums, rowdy tubas and ceremonial voices. Onibaba is a glaring interpretation of envy, resentment and desire.

The action of the film is scattered with superbly arranged, almost nonrepresentational structures of the wasteland itself. This is done with long shots of the open prairie and close-ups of the seagrass, which look like daggers. With stark lighting, Shindo shoots the night scenes like they are just being lit by a searchlight at a crime scene. What is essential is that it does not look at all like natural moonlight. But, no matter what time of day it is, the swampland looks like the end of the world. 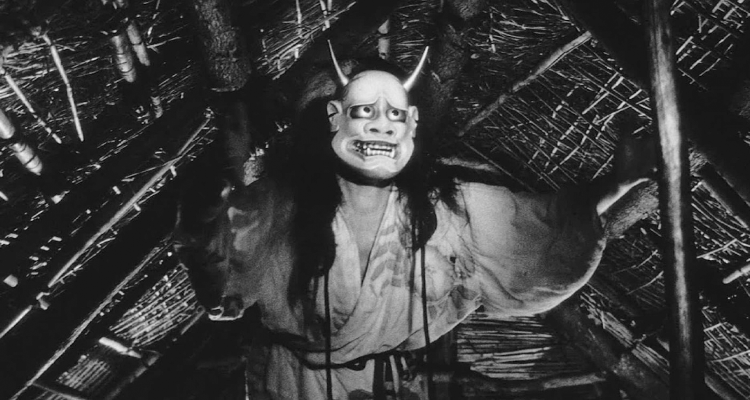 Onibaba could easily be paired with Shindo’s Kuroneko, which tells a similar tale of two women drawn from the grave in the form of shadowy man-eating cats to take revenge against the band of rebel samurai for their rape and murder. Elements of these films are also found in Hiroshi Teshigahara’s Woman of the Dunes, Nagisa Oshima’s In the Realm of the Senses and Takashi Miike’s Audition. These films all have the angle of horror and raw sexuality.

Erotically indicted and immersed in allegory and mythology of its Buddhist and Shinto roots, Onibaba is a look at the destructiveness of sexual needs. Filmed within a stifling swaying sea of grass, it is one of the most remarkable and exceptional Japanese films.