Peter Benchley was a struggling freelance journalist in 1974, when Doubleday publishers 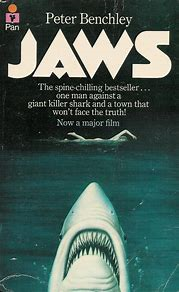 commissioned him to write a novel.

It’s based on a story he pitched about a Great White shark terrorising a seaside town.

Benchley was fascinated by sharks and began researching the matter so much that he got lost in the subject.

In fact, it was when the publishers asked for his long-spent advance back, that he finally finished his manuscript.

It wasn’t plain sailing at first as some early drafts were laughed at by the publishers.

So, it took one and a half years before Bletchley finally finished.

Finding a title proved to be the hardest thing:

“We cannot agree on a word that we like, let alone a title that we like. In fact, the only word that even means anything, that even says anything, is “jaws”. Call the book ‘Jaws’ … it’s short; it fits on a jacket, and it may work.”

And this is how Jaws, the most terrifying and vengeful big fish since Moby Dick, came to be.

Night skinny dipping would never be the same again…

But which is better: book or film?

Few books have such a stunning and heart-racing opening chapter.

The fish appears immediately, and we experience the harrowing build to the frenzied attack on a night swimmer.

The splashing, the pounding of the heart in the woman’s chest, and the shark’s movements as it prepares to attack.

It’s wonderfully written. And it all culminates in that horrific first bite.

Deathly silence, as the sea gently lulls what’s left of the body back to shore.

You cannot put this book down.

I remember finding my battered copy whilst on a foreign holiday many years ago, which felt uncanny as I read it, making me especially nervous as I swam in the sea.

There are quite a few things which, sadly, are not portrayed in the film. 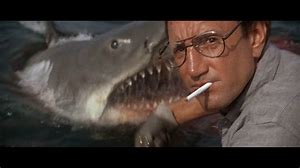 Such as Chief Brody’s wife Ellen having a brief affair with marine biologist Hooper (played by Richard Dreyfuss in the film).

It’s an interesting side story, exploring Ellen’s frustration about being a town Sheriff’s wife, and her need for distraction.

Chief Brody (played by Roy Scheider) oddly suspects this from the onset and continually tries to expose the lie.

One theme in the book, which is underplayed in the film, is the struggle of the town’s people to make ends meet.

The hardship of a seasonal town is exposed in full. Winter months are spent on benefit for some islanders, hoping for early fine weather to be able to make some money in the summer season to last all year.

I think this is an essential backstory. It brings into focus the struggle which Chief Brody faces when making the decision to close the beaches, and potentially bankrupt the people.

The film is iconic, in both images and music. 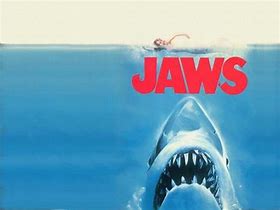 There are probably only a handful of people in this world that, on hearing those first few famous bars of music, do not shout out Jaws.

During production issues with the mechanical shark, the music was employed to suggest the shark’s presence to great effect.

As you watch, you believe the shark is coming when you hear the music build.

The score earned Williams an Academy Award and was later ranked the sixth greatest score by the American Film Institute.

I adore the look and feel of the film.

It’s a wonderful timecapsule to the 1970’s with beautiful shots of the unspoiled Martha’s Vineyard, and Chief Brody looks identical to what my late father looked like back then. So, it will forever be my favourite film.

Let’s not forget the mechanical beast which, considering the crude construction, looks incredibly real and frightening throughout the film.

My favourite scene, which isn’t in the book, takes place the night before the shark hunt. 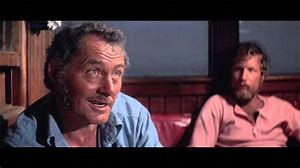 Chief Brody, Hooper and Quint get drunk and exchange stories about their assorted scars and Quint tells the story of how that he survived the sinking of the USS Indianapolis.

His gravelly voice, telling of men floating in shark infested waters, slowly being attacked, is very moving and frightening.

“Sometimes that shark looks right at ya. Right into your eyes. And the thing about a shark is he’s got lifeless eyes. Black eyes. Like a doll’s eyes. When he comes at ya, he doesn’t even seem to be livin’… ’til he bites ya…”

This is a tough decision indeed!

I love the book.

The masterful build-up of suspense, the insight into the islander’s lives and struggles, the connotations to Moby Dick about man versus beast, the fullness of the characters.

To me, as a writer, Benchley’s book is a masterpiece.

But… that scene with Quint is absolute genius.

Chief Brody, with his harpoon gun, is like a marine Jedi. The music, the shark’s mouth, and that famous ‘dolly-zoom’ shot on Brody’s face, which combines both track and zoom, made cinema history and is now known as the “Jaws” shot.

I must admit, I think the film is the absolute winner.

I just love it too much.

But I don’t recognise the existence of any of the sequels.