BOOK VS FILM: THE EXORCIST

The Exorcist, the iconic book by William Peter Blatty, came out in 1971. 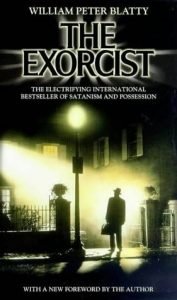 And it took the world by storm.

It was an instant success and Hollywood came knocking, even before the book was finished.

Rumour has it that Blatty rushed the end of the book to be free to work on the script.

Blatty unofficially agreed that the end was somewhat abrupt, and lacked a longer transition back into normality, to balance the slow decent into hell at the beginning of the story.

Just two years later the film was released, and exorcists everywhere had their phones ringing off the hook.

Possession was the new black.

But which is better: film or book?

If you’ve seen the The Exorcist, it’s almost impossible not to compare or remember scenes from the film as you read. However, the book is a very different experience.

The story is essentially centred around Father Karras’ struggle with his faith, which is ironically reinforced by the presence of evil.

A detective, trying to solve a murder he believes is the subject of a cover up and, of course, about a young girl’s possession.

We read about Regan’s mother Chris MacNeil, and her life as a Hollywood star, sacrificing her career to help her daughter, their sugar-sweet relationship and the creepy live-in housekeeper and her husband.

The book relies on the reader’s imagination in parts, but it only manages to unsettle rather than scare. 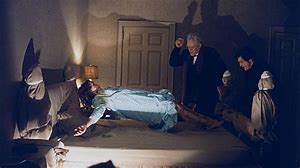 The scene where Regan, who is barely twelve, masturbates with a crucifix is very graphic and a very uncomfortable read, to say the least.

Especially if you listen to the recent 40th anniversary audio book release, narrated by the gravelly, rich, Santa-like voice of the author.

Thankfully this scene is very much abridged in the film.

There is no denying The Exorcist film is very similar to the book. Especially because the script was written by Blatty and earned him an Oscar. 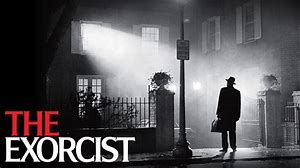 The film could have easily gone very wrong and turned the story into a parody but instead it gave us one of the most iconic horror films ever made.

According to the film’s director William Friedkin, “This film was just begging to be a flop. If we’d got it wrong, it could very easily have turned into a laugh-riot.”

Unfortunately, we cannot say the same for the sequels.

Together with Mike Oldfield’s ‘Tubular Bells’ score, the film went on to be nominated for multiple Oscars.

It was the first horror film to achieve such an accolade, paving the way for many more incredible films to come.

This is probably the most important legacy The Exorcist could leave to the horror genre.

It’s incredible to think what’s achieved with rudimental special effects, including: actually freezing Regan’s bedroom so the visible breath was real, subliminal images of the demon’s face, the spider walk and that unforgettable (and much mocked) head spinning moment. 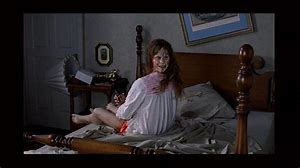 The make-up looks poor in places, if judged by today’s standards, but it certainly worked at the time and scared the hell out of me.

Unusually for me, the film wins in my eyes.

It’s simply superior to the book in many ways and focuses more on Regan’s fight to overcome her possession, which is really what we want to see.

It’s a feast for the eyes and we love every minute of it. Even if we end up sleeping with the light on for the rest of our adult lives…