Studio Canal is bringing you a newly restored version of the anthropological horror gem, LINK, on Blu-ray, DVD and Digital from 1 February.

Underpinned by a chilling score form the legendary Jerry Goldsmith (LA Confidential, Star Trek: The Motion Picture), this brand new 4k restoration will be available to own on Blu-Ray for the first time in the UK, as well as on DVD and Digital, from 1 February complete with brand new bonus content.

To celebrate the release, we’ve got Blu-rays to give away to two lucky winners! 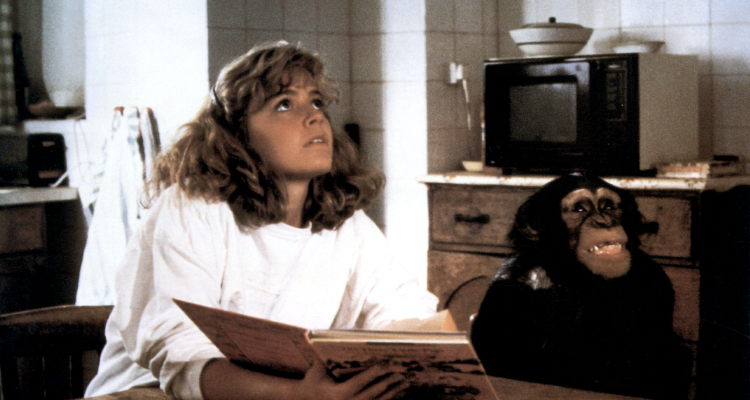 Jane (Elisabeth Shue), an American zoology student, takes a summer job at the lonely English cliff-top home of one of her lecturers, the single-minded anthropologist, Dr. Steven Phillip (Terence Stamp). Dr. Phillip, whose work explores the link between man and ape, suddenly vanishes, leaving Jane to care for his three chimps alone. Voodoo is a savage female, Imp is affectionate and child-like whilst Link is a circus ape trained as the perfect servant and companion.

A disturbing role reversal rapidly begins to take place between master and servant and Jane rapidly finds herself a prisoner in a simian house of horror. In her attempts to escape she finds herself up against an adversary several times her physical strength with the instincts of a bloodthirsty killer.

Inspired by scientific research on violence amongst chimpanzees, the film wasn’t originally intended to be a fantasy but, instead, to reflect the reality of what chimps could be capable of whilst challenging the 60s anthropological theory that man was the only species capable of making war with itself. Link is also notable for being one of a very small number of films to be made with animals not to have received a single complaint of cruelty due, exclusively, to the work of legendary animal trainer Ray Berwick.

Link is available to pre-order now on Amazon

Two lucky winners will win a copy of Link on Blu-ray.

The winner will be notified by email after the competition closes at 23:59 GMT on Friday, 29 January.

Open to UK residents only.

Make sure the form submits before closing the page
We only need your email to contact you if you win. All data will be deleted once the winners are notified.