How To Bring Horror Theatre To Life

Tom Worsley and Sasha Roberts are the writers, producers and performers of horror theatre spectacular Father of Lies, which sold out at the Edinburgh Festival Fringe and the London Horror Festival last year.

Next week, the show returns to London at the VAULT Festival from Wednesday 28th February to Sunday 4th March 2018 – book your tickets quick, before it sells out again!

You might have seen an article we recently published by filmmaker Oliver Park, which explored how he created his first horror film, the pitfalls he encountered and what he learned from the experience.

And today, we’re delighted to say that Tom and Sasha have done the same, by charting their experiences on how they brought their own ideas from the initial conception, to a full-blown, horror theatre production.

Their story begins underneath the trailer for their show, and a must-read for anyone thinking about bringing their own ideas to the stage.

We hope it inspires any intrepid horror theatre playwrights to make the leap, and of course, The London Horror Society is here to help make your plans a reality in any way we can.

We love horror films. But making one is difficult. And expensive. And you rarely make any money, because often no one will even see it!

So – what not make a horror play instead!

We did, and it’s been an incredibly exciting, fun and rewarding experience.

Horror is underrepresented in theatre, which is a shame as it suits those intimate, often dark, communal environments, where the audience’s imagination can run wild.

Happily, the genre is enjoying a renaissance, with several horror shows at the VAULT Festival this year: Providence, Tomorrow Creeps, Unburied, Bury the Hatchet and The Thing That Came To Dinner.

Coming Up With A Story 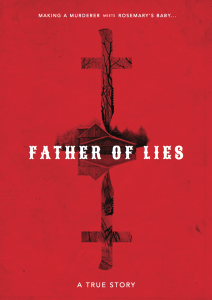 The single most important element. We were lucky in that we didn’t have to come up with one… we found one! A true tale about an unsolved murder in West Germany, 1973, which involved, ghosts witches and cults (allegedly!).

True crime documentaries like Making a Murderer have been enormously popular in recent years. Crime stories, like horror, trigger that most basic and powerful emotion: fear. Also, genre fare is easier to sell; people think (or think they think) they know what to expect…

Our advice would be to create something you’d want to see. If you don’t care, why should anyone else? You like zombies? We like zombies too! You’ve already sold two tickets!!

And never be scared of risk. If you hit a golf ball too hard, you might still get lucky and score a hole-in-one. But under-hit and you may as well have not bothered taking part.

…of limitations. Embrace them! We couldn’t afford other actors, a technical team, or expensive props, set or lighting. That didn’t worry us though. We enjoy big West End shows like The Woman in Black, The Exorcist and Ghost Stories, but they’re most effective in the quieter, creepier moments.

Dread and tension are amplified by the close proximity of the stage. So, much as we love vampires and werewolves, we turned to films like Don’t Look Now, The Wicker Man (NOT the Nicolas Cage remake!! Some horrors are just too terrible…) and Rosemary’s Baby.

Under the surface, they focus on relatable fears: bereavement, the beliefs of others, being unable to protect one’s child… We wanted to let the fear grow in the audience’s mind through the story and situation, just as they do in those movies. 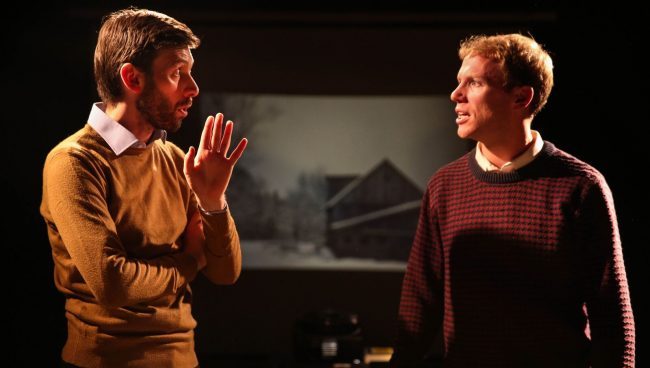 Tom and Sasha on stage in Father Of Lies

There’s an understandable temptation to undercut fear with humour. This protects yourself from ridicule. Instead, we made ourselves commit to the horror, which required sincerity. Dare to open your heart. And don’t try to scare the audience; show them what scares you. You’re not the only one who knows there’s a monster under the bed…

We did a read through in front of friends. Some work in theatre, but not all. A wide range of opinions is vital when it has just been you working on it for months. You look at it as if for the first time. It was an nerve-wracking experience, but better to get feedback there than in front of a paying audience. 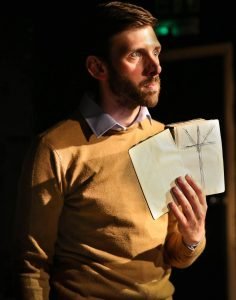 Low budget? Look to sound. It’s a cost-effective creator of suspense and atmosphere (used brilliantly in The Woman in Black).

We sourced from FreeSound.org. You have to trawl through lots of rubbish, but you’ll get there, and it’s free!

Similarly with your set – be creative. We only have two pieces of set: a vintage pram and a carousel slide projector. (Thanks, eBay!)

Not only can we project photos of people and story locations, their presence create a tangible sense of period, which is invaluable for a show mostly set in 1973.

Build on your successes

As we experienced success (eventually turning a modest profit), we’ve been able to build the team, and for our run at VAULT Festival we’ve got a director and sound designer. The more you can collaborate and delegate the better. 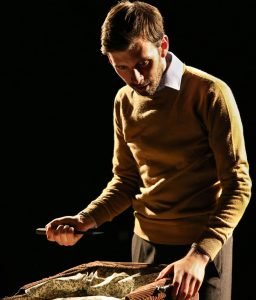 Sasha with ‘not a real knife’!

Father of Lies took a year to write, and even now we are always developing the show.

Our first performances were at the very cool Theatre Utopia in Croydon in December 2016.

Both those horror theatre festivals are great and really supportive, so get that application in — nothing beats a deadline for inspiration!

…don’t use real knives! Despite rehearsing the scene a thousand times, after our final performance in Edinburgh, one of us ended up in hospital having been stabbed through the hand. So if you take anything from this – hire prop knives!!

Father Of Lies runs from Wednesday 28th February to Sunday 4th March at The VAULT Festival. Grab your tickets here before they sell out.  We hope you enjoy the show!