In the last twelve years, Burbank-based production company The Asylum has introduced and developed the fantastical shark horror sub-genre.

Others have tried – Avalanche Sharks, DinoShark, Corman’s Sharktopus – but The Asylum remain the gold standard for shark-related horror fare.

So, let’s take a look at their fin-tastic output, starting with: 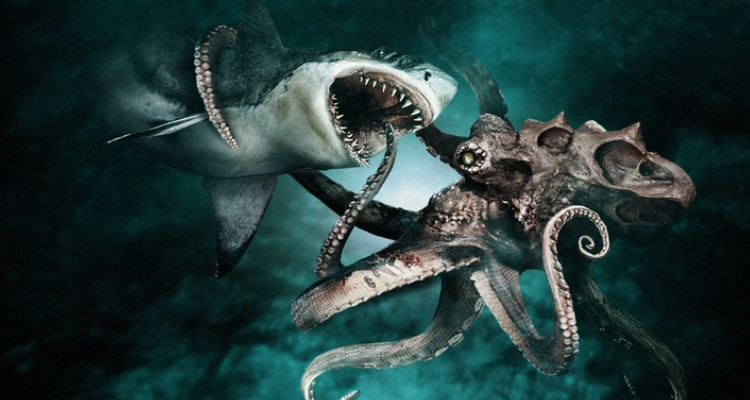 The shark horror genre-defining original – who can forget the moment when ‘Megs’ leaps from the water and bites a passing aeroplane? Boss Monster!

Our piscine hero is based on a real prehistoric ancestor of the Great White Shark, Carcharadon Megalodon. They may have taken some liberties with size – the Megalodon is estimated to have reached sixty feet in length compared to the considerably larger size of the Mega Shark – but we can forgive them that.

Megs and his eight-tentacled sparring partner are freed from a glacial hibernation of millions of years by a combination of startled whales and a helicopter crash. As you do.

After that, it is for bizarrely-cast 80s pop star Debbie Gibson and her Japanese counterpart, Vic Chao, to deal with this pair of aquatic pugilists, as they proceed to run riot across the world’s oceans.

Gibson and Chao try some clever sciencey stuff with chemicals but that all goes tits up so they elect to get the pair in a fight instead. And that works fine, with both monsters dying in the ensuing scrap……

…. except they don’t – surprise! Megs survives for the 2010 shark horror sequel, and therefore needs a new adversary. Shuffle forward Crocosaurus, another ‘big lad in a number nine shirt’, specifically a 150-foot crocodile.

Gibson and Chao are gone – although Gibson is referenced in the name of the US Warship destroyed by Megs in his first appearance in the film – and are replaced by former boxer Gary Stretch, Jaleel White, Sarah Lieving, and Star Trek: Voyager’s Robert Picardo.

The US Navy gets involved where it shouldn’t (stealing Crocs’s eggs) and that leads to the two monsters having a dust-up that causes a tsunami in the Panama Canal.

Then we learn that Crocs has been playing the long game and left a load of eggs to hatch all along the Eastern seaboard of the United States. The hatchlings initially wreak havoc on the east coast, before heading off to Hawaii – because the surf’s good, right? – to join their Mum in an epic confrontation with Megs.

The humans try all kinds of sciencey stuff again – you’d have thought they’d have learned that doesn’t work from last time – but the monsters are only finally finished off when an exploding volcano detonates a nuclear reactor which Megs had unwisely swallowed earlier.

So that was lucky. 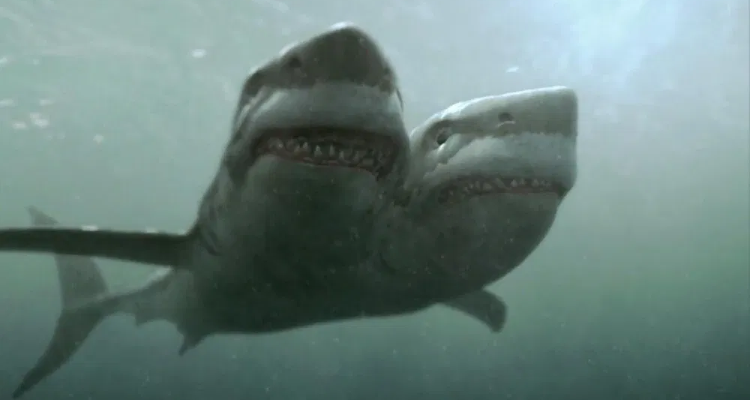 Combining the acting talent of Carmen Electra and Brooke Hogan, 2012 gave us a new shark nemesis with twice the heads.

The film pits this new sea fiend against the Sea King – a research boat operating with a group of students.

Featuring a succession of twenty-one different victims and a tsunami – The Asylum like its tsunami’s – 2-Headed Shark Attack concludes with the titular shark unwisely deciding to munch on a motor leading to a spectacular death reminiscent of the end of Jaws.

The game-changing opus that started a shark horror dynasty.

Pitting hilariously-named hero Fin (do you see what they did there?), ex-wife April, and friends, against a shark-infested tornado, Sharknado was one of the surprise hits of the year.

It culminates in Fin destroying the Sharknado with a bomb attached to his car and then cutting his way entirely through a falling shark with a chainsaw. Legend.

Following its success, a representative of the US National Weather Service jokingly recommended what to do in case of a Sharknado, saying: “As with any waterspout or tornado, the best advice is to be in an interior part of the lowest floor of a sturdy building – and not outside, whether sharks are raining down or not.” 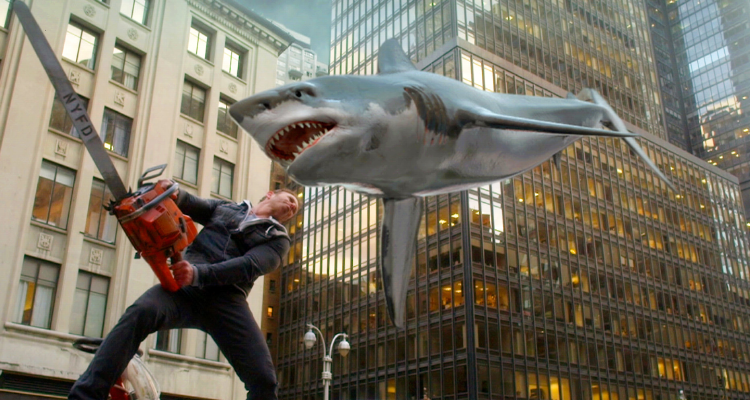 The sequel sees Fin and April promoting the book they wrote about the first Sharknado…. only to run into a second Sharknado whilst airborne over New York.

The shark horror action continues in the Big Apple with the Sharknado blowing over a ball game, flooding the subway system before consolidating in an epic finale over the Empire State Building, in which Fin finally conquers the Super-Sharknado by freezing it with a huge tank of Freon.

Oh, and he rides a great white shark down from the storm using chains and impales it on the Empire State Building’s antenna. Natch.

Not content with the sequel to Sharknado, The Asylum went back to their original icon and gave us the third instalment of the Mega Shark series, this time presenting him with a mechanical adversary.

He’s released from an iceberg off the coast of Egypt and starts off by decapitating the Sphinx (probably gave him a funny look). From there, it’s maritime chaos as usual. With the world’s ports on lockdown and the global economy teetering on the brink, rumours start to circulate about a United Nations weapon designed to defend against the threat.

It’s a shark-shaped submarine because, well, why not? Piloting it are newcomers Christopher Judge and Elisabeth Rohm, joined by a returning Debbie Gibson.

After an initial skirmish, Megs evades the sub and attacks a massive oil platform off the Australian coast, causing an environmental disaster. Cue: Mecha Shark to the rescue. Megs is having none of it though and fin-slaps his mechanical rival from one side of the ocean to the other, damaging it to the extent that it ends up going on a rampage through the streets of Sydney. Australia does pretty badly out of this one.

Mecha Shark ends up blasted back into the water by some fighter jets, where a final battle with Megs is resolved by a dislodged torpedo blowing up the pair of them.

Introducing Megs version three, and moving almost into Godzilla territory, this fourth instalment pits our finned hero against a giant Soviet robot, designed as a doomsday device during the Cold War. 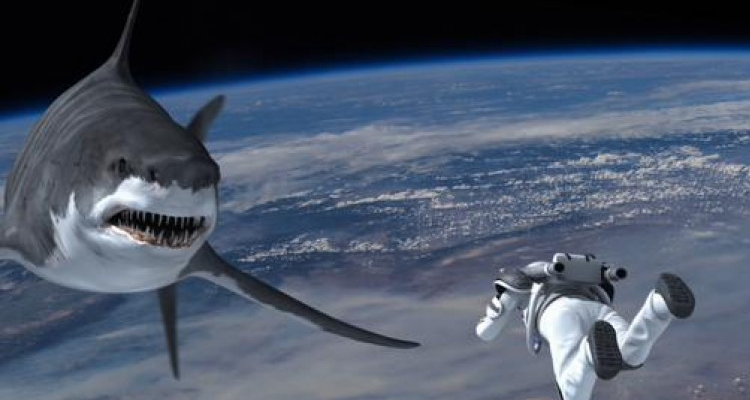 The budget and the scale went up on this shark horror and, with the franchise’s star firmly on the rise, we saw cameos from David Hasselhoff, Bo Derek, and Frankie Muniz.

We start in Washington DC, where our perennial hero, Fin, is to receive the medal of honour, when……wouldn’t you know it, a Sharknado strikes the White House, only to be fought back by Fin and the POTUS.

Next stop is Florida and, en route, Fin encounters Nova, his employee from the first film, now transformed into a seasoned Sharknado fighter. There are Sharknados forming all over the country this time around, so he needs all the help he can get.

Realising that all the various Sharknado’s are going to combine into one super-storm that will destroy the East Coast (the ‘Feast Coast’!), Fin hatches a daring plot to destroy it from space, with the help of his estranged father, a NASA colonel played by the Hoff.

The initial plan to use the space shuttle’s external tank as an explosive fails, forcing Fin to resort to Plan B – a satellite laser weapon.

The Sharknado is destroyed but its shark constituents are thrown into space in the process – luckily, Fin is equipped with an energy-beam chainsaw to fight them off. He likes his chainsaws does Fin.

If two heads are better than one, logically three heads must be better than two. And later in 2015, Asylum made it so.

This time there’s an ecological aspect, as a mutated 3-headed great white shark emerges from the Great Pacific Garbage Patch and heads for an island research station.

Set against it are the epic pairing of cult Mexican actor Danny Trejo and American wrestling superstar Rob Van Dam. Even for a 3-Headed mutant shark, this is stiff opposition.

Nonetheless, the plucky fish gives good account of itself, munching its way through almost seventy victims in total before it is finally slain. 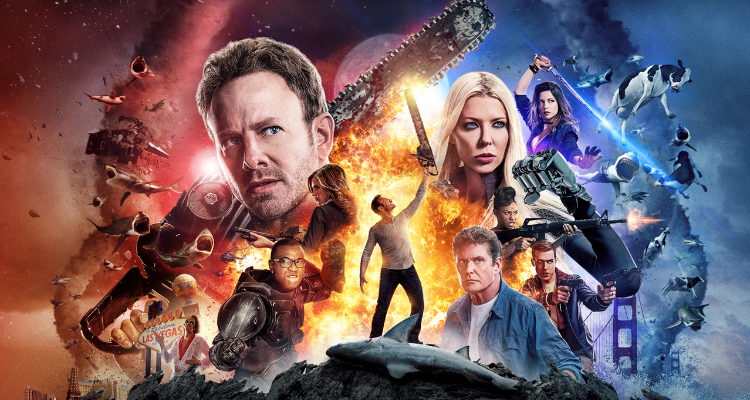 Almost certainly the best film ever made.

Five years after the previous film, tech mogul Aston Reynolds has developed a technology that is capable of using radio waves to defuse tornadoes, meaning no more Sharknados. He’s also built a shark-themed hotel in Las Vegas with a giant tank of sharks at the centre.

I mean, what could go wrong with that? Yeah, that. There is some kind of plot but there’s no reason to bother with that.

When the inevitable Sharknado forms, the stakes are ratcheted up and up and up as various new elements are added to the storm.
Firstly, the Grand Canyon contributes stones to form a Bouldernado.
Next an Oilnado which ignites and becomes a Firenado;
Then a Hailnado;
And a Lavanado;
And a Cownado (really not sure about that one; you could say I have beef with it);
And a Lightningnado;
And finally, a Nukenado, full of radioactive sharks.
So things are pretty serious by then.

Luckily, we have a trio of Fin (now in a cybernetic exoskeleton), Reynolds, and April (now a super-powered cyborg) to counter the Nukenado at Niagara Falls in a legendary finale.

But it’s not over, as evidenced by the Eiffel Tower falling from the sky, right at the end. Could this mean future dangers from Sharknados? Yes is the answer.

So that’s the first era-defining seven years of the Asylum’s Sharktopia – in Part Two, I’ll bring us right up to date with their shark horrors (spoiler – the sharks get more heads) …