Even Better Than The Real Fin: Part Two

In the previous article, we considered the first epoch of Burbank-based production company The Asylum’s colossal contribution to the fantastical shark horror sub-genre, all the way up to the timeless classic, Sharknado: The 4th Awakens. 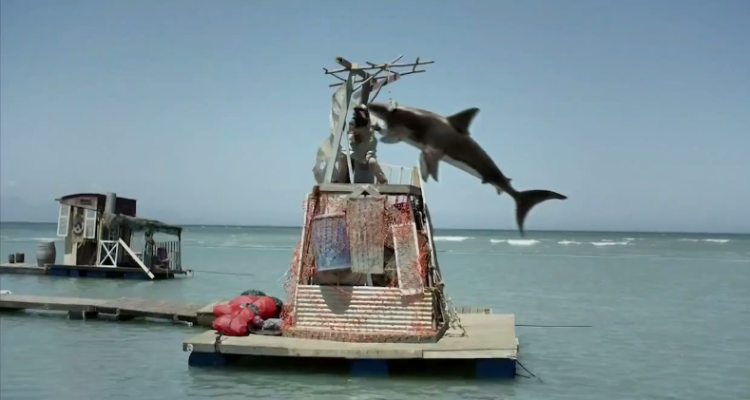 It’s the future and the polar ice caps have melted, submerging most of the planet’s landmasses beneath the waves.

Can you see where this is going?

Yeah, sharks can basically swim amok now, not that they were massively limited to the oceans in previous Asylum productions. Killer whales have clearly politely stepped aside to yield the position of apex oceanic predator to shark-kind and that might be because our finny anti-heroes are now led by a mutated Alpha Shark (let’s call him, Alph).

Humanity is reduced to living on floating shanty-towns, where they are constantly vulnerable to sharks, who have by now got extremely good at the old, ‘leap out of the water and bite the human in half as you fly over-head’ tactic.

Anyhoo, a bunch of heroic scientists have a plan to use science to reverse the global dampness, fix the climate, and reduce sea levels back to where they were.

We don’t need to go into how – it’s not important. Or fathomable (do you see what I did there)?

Before they can do that, though, they have to take down Alph.

Then they do the first thing. 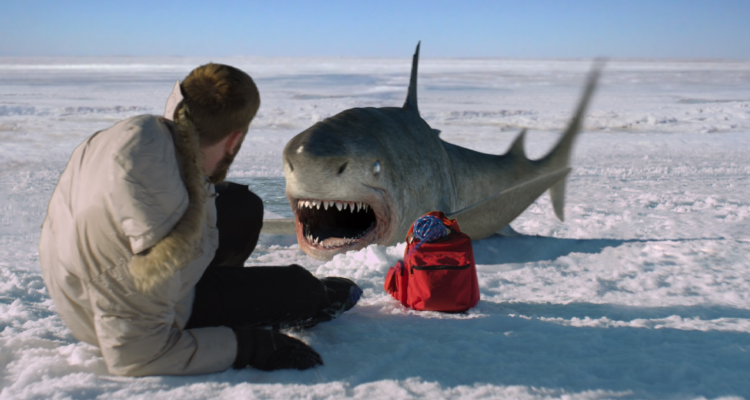 Missing an obvious cameo by either Ice T or Vanilla Ice (why?!?!), this nevertheless delivers plenty of icy chills (and gore).

At the Oasis (mad for it) Polar Base, deep in the Arctic Circle, a bunch of scientists are up to all manner of sciency stuff. Someone thought it was a good idea to build it floating on an ice sheet.

Global warming has a bit of a sudden acceleration and, before you know it, the damaged facility is sinking into the freezing water. Although to be fair, the humans were in trouble even before that, because the sharks had apparently cracked ‘breaching’. This is the trick of an aquatic predator flinging itself onto land, in order to reach prey.

Part of me thinks this might be related to the whole thing of killer whales taking a step back from being Ocean Head Honcho’s, because it’s a key orca skill. Maybe they agreed to teach the sharks as part of some oceanic non-aggression pact.

Although the sharks have taken it well beyond the classic limits of the killer whales, in some cases meandering some hundred metres or more onto the ice sheet in pursuit of hapless human prey. 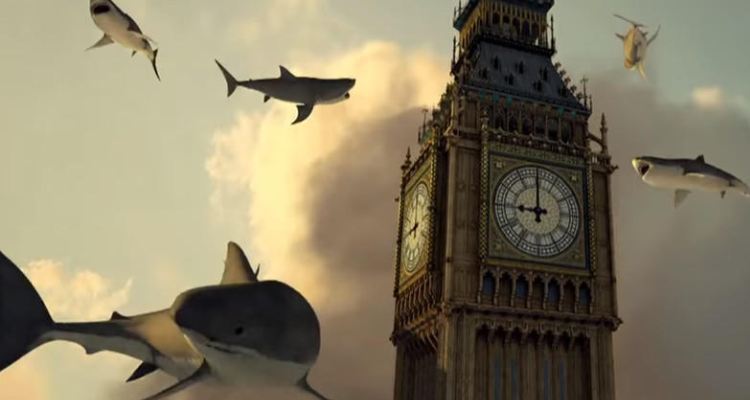 By now, the franchise was iconic enough to command a mass of cameos, including (but not limited to) Charo as the Queen of England; Fabio as the Pope; Chris Kattan as the British Prime Minister; and Olivia Newton-John and her daughter Chloe Lattanzi as two brilliant scientists (Asylum like their scientists to be female and sexy, as a general rule).

In classic Sharknado fashion, there is no attempt to, ‘keep the powder dry’ and we kick off with a major throw-down at Buckingham Palace between Fin and the Palace Guards and the sharks of an entirely new kind of sharknado.

It’s different because it has a dimensional vortex in it, into which disappears Fin’s young son, Gil (do you see what they did with his name?)

There ensues an international chase to put a Bond movie to shame, lurching from Switzerland to the USA to Japan to Brazil to a shattering finale in Egypt.

And an epic finale it is, because April dies, along with everyone else, as a global sharknado consumes the entire world.

It appears that Fin is the last human left alive until a much-aged Gil turns up (played by Dolph Lundgren, of course) and explains that he has developed a sharknado-powered time machine.

Can you see where the sixth and final film might be going? 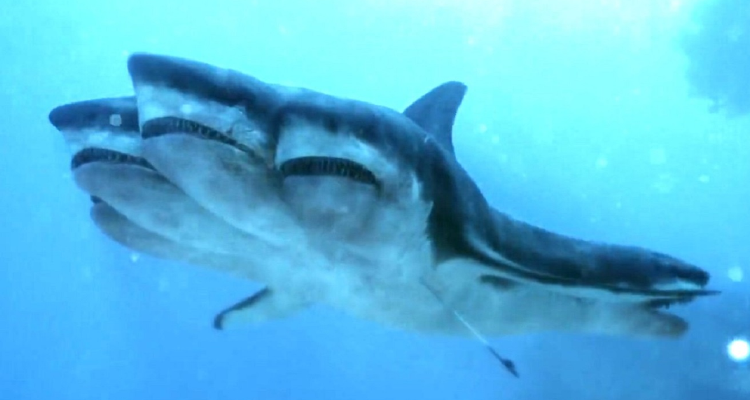 And so the head-count on the mutant sharks continues to rise (spoiler: we’re not at the limit yet).

You have to wonder just how hungry this animal is, because by now, almost half of its body mass is mouths. Although of course, this beast does not start the film with five heads; that would be silly.

No, it starts with a far more reasonable four heads…and only subsequently, later in the film, does is mutate further, with its tail becoming a fifth head.

Inevitably this lad goes the way of his forebears, though, after being pinned to the sea-floor by a helicopter.

Looks like Schwarzenegger gave bad advice when he said, ‘Get to the choppa!!!!!’

We were spoiled for shark horror in 2017, with this final, fourth contribution of the year.

It’s kinda a sequel to Planet of the Sharks (which is odd, given that a planet is bigger than an empire, but hey ho).

This time the sharks are a little on the back fin because they’re controlled by a human Warlord who uses them as enforcers to exact tributes from the other human settlements.

Then he encounters a young girl who has the natural power to command sharks, rather than using a mechanism, like he does.

I’ll be kind and say that this is not Asylum’s finest work. 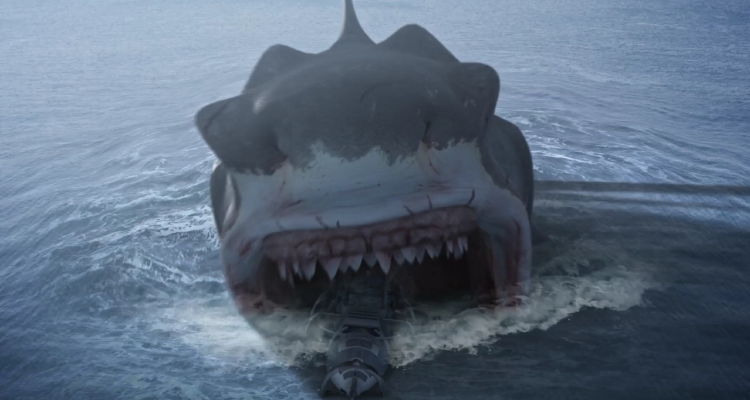 Did you spot what was unique about this one? S’right; it’s a shark horror that doesn’t have, ‘shark’ in the title.

But that’s not the only reason to be excited about it.

Whilst the plot is ostensibly about a US crew and a Russian crew teaming up to fight the standard massive marine man-eater., that’s not really what this boils down to.

Because even when you’re a seventy foot prehistoric shark, you are still not as badass as Michael Madsen.

As he demonstrates in the finale, when the Megalodon smashes in through the hull of the military vessel, to find Madsen laconically smoking a cigar in the hold. Madsen stubs out his cigar on the shark’s snout before blowing up both of them, along with the vessel. 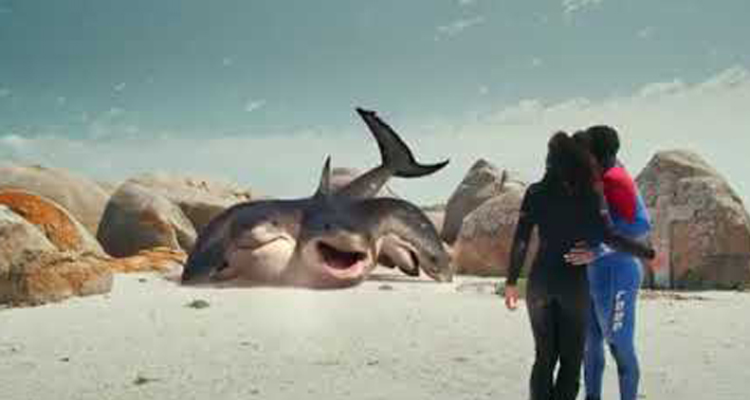 In case you were wondering about anatomical design issues on this one: two heads at the front, then a pair of heads on each flank. And actually that design is quite important, because this version uses four of those heads as makeshift limbs, enabling it to move around fairly effectively on land.

The whole, ‘needing to breathe water’ thing doesn’t appear to be much of an issue.

Now we’ve got that out of the way on to the all-important plot:

On the remote Isla Corazon, off the coast of Mexico, there’s a marriage boot camp. Given that it’s no longer restricted to the water, the bratty young couples make pretty easy pickings for our fishy anti-hero.

2018 The Last Sharknado: It’s About Time

The end; the finale of certainly the most important franchise in cinematic history.

Firstly, it’s important to say that tragically Dolph Lundgren does not return as Gil.

But apart from that, this film delivers literally anything you might desire.

A jump 20,000 years into the future where Robot April rules the Earth using an army of clones and flying, robotic sharks?
Check.

Farewell Sharknado; cinema will never be the same again. 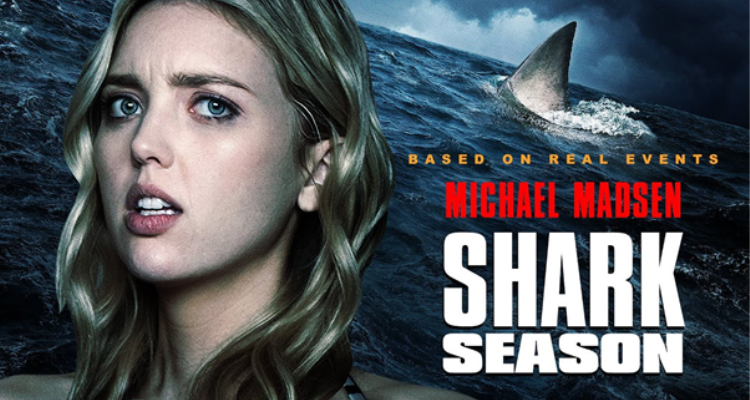 After an entire year bare of shark-fare (Asylum – so cruel!), we get this.

Guys, it does not feel like your heart is in this anymore!

Michael Madsen’s back, but he wishes he wasn’t, and he spends most of his screen time on the phone (presumably to his agent).

Three kayakers are stuck on a remote island, stalked by a great white shark; then the tide starts to rise, slowly reducing the land mass.

All of which brings us right up to date with the Asylum’s Sharktopia Opus but fear not, for this is not the end! I can now confirm that 7-Headed Shark Attack is in production, for release later this year.

Honestly, I shudder to think where that final head is going…