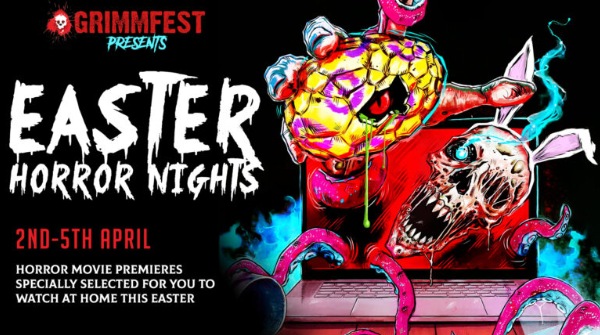 It’s going to be a Grimm Easter! Five nights of horror movie premieres and extra exclusive content from Arrow Video.

Easter is traditionally a time for rebirth, renewal, resurrection. But as the Pandemic continues to rage, and the world remains on lockdown for the foreseeable future, it is also a time for rethinking. Thus, while the Grimmfest team had hoped to be hosting a ‘live’ Easter event, the Grimmfest Easter Edition will now be taking place online and will build on the success of the Grimmfest 2020 online experience.

Originally set for eight feature films over four nights, the event has drawn so much interest from film makers and distributors alike, that Grimmfest have decided to expand the scope to incorporate six more feature films, turning their Easter Horror Nights into a full on festival in its own right!

Grimmfest’s first Easter Edition kicks off on the evening of Thur April 1st, 2021 with their preview night, and then continues across the evenings of 2-5 April, with a series of feature film premiere double bills with supporting shorts and Q&As with the cast & crew of each feature. In addition, there’ll be an exclusive pass holder double bill and an ARROW double bill both of which can be accessed any time across the weekend.

There’s so much to watch you won’t have time to get bored this Easter!

The bond between a Swedish family is put severely to the test by a haunted duplex in the UK Premiere of Tord Danielsson and Oskar Mellander’s nerve-jangling and emotionally harrowing THE OTHER SIDE. And male entitlement collides with malevolent mysticism in the European Premiere of Alexey Kazakov’s psychedelic Russian witchcraft drama MARA.

Transhumanist philosophy, temporal paradox and fractured identity collide to truly mind-blowing effect in the UK Premiere of the stunning Triple-F-Rated South Korean Sci-Fi head-trip, TRANS; while reality grows ever more subjective and fragmented in the World Premiere of Paul Schuyler’s remarkable, slow-burning study of psychological breakdown RED RIVER ROAD, made entirely under lockdown, with the Shuyler family themselves serving as cast and crew.

You can either purchase a ticket for each individual night (Which consists of 2 x feature film premieres, short films and Q&As) or a full pass, which will get you all four nights (2-5 April), exclusive pass holder content (SLEEPLESS BEAUTY & RENDEZ-VOUS) and 30% off our preview night and 30% off our ARROW PRESENTS double bill.

That’s a total of 14 feature film premieres, at least 20 brand new short films and a Q&A with every feature film team.