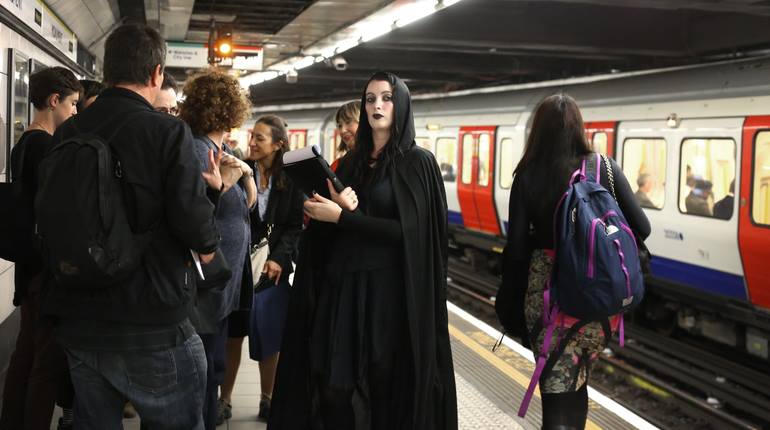 THIS EXPERIENCE INVOLVES RIDING ON LONDON UNDERGROUND TRAINS SO PLEASE BRING AN OYSTER CARD OR TRAVEL PASS WITH YOU!

Tour begins at Bethnal Green and finishes at Covent garden You will not enter or leave the London underground network apart from at these stops.

Get on board Platform 1 – Hell bound and discover the secret history of the London underground. From the 173 people  crushed to death in a wartime disaster, to the “elderly angel” who apparently saved a tube worker from electrocution.

The tube is full of ghosts. Are you brave enough to encounter them?

Join Siwan on a tour of London’s hidden underworld, where past and present collide.

Starting at the Stairway to Heaven monument in Bethnal Green, scene of one of London’s worst wartime disasters, this tour will take you on a fascinating journey below the pubs and pavements of the everyday world into the often seen but seldom explored corridors of the London Underground

Journey to Farringdon the oldest stop on the tube and keep an ear out, as we tell you the horrific tale of the screaming Spectre who lurks around the building close to where she met her end…

Everyone’s heard of the great King’s Cross fire of 1987 but while its aftermath has lead to many improvements for the london transport network its also given rise to a rumours of a rather tragic haunting.

From plague pits to poltergeists, the Underground is a vast labyrinth of hidden secrets. Are you brave enough to discover them?

Please note: This tour does not include any visits to the tube network’s abandoned stations as these are closed to the public other than for official TFL-run tours. If you really want to explore them, you’ll need to keep a close eye on the London Transport Museum web site, as such tours are infrequent and expensive and tend to sell out quickly.

The Host is happy to schedule in dates for private groups but only for groups of 6+. Please contact Siwan via the Funzing messaging system directly.