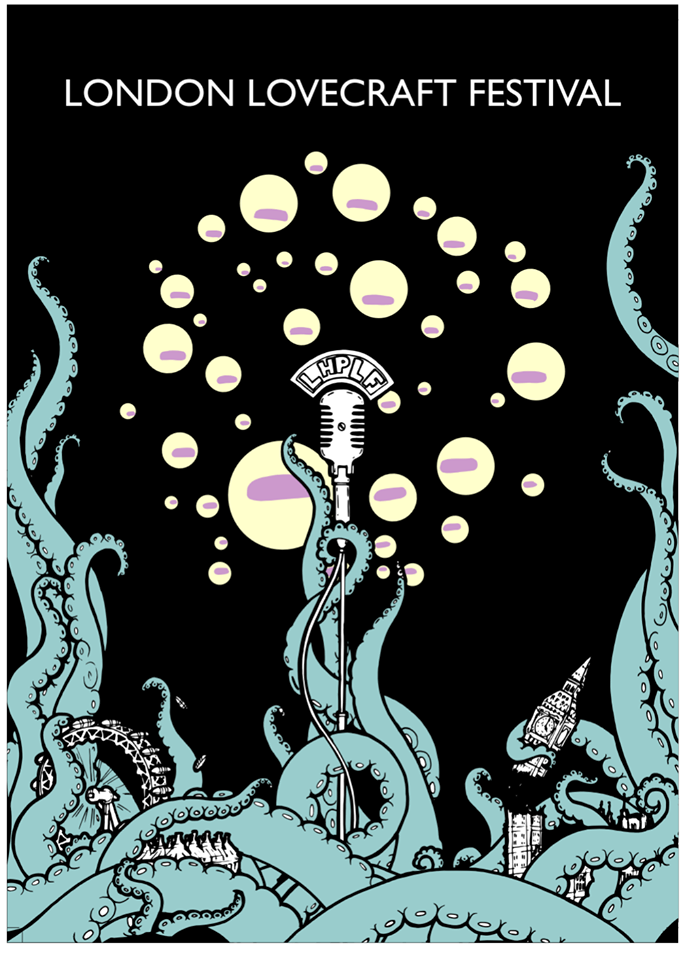 The London Lovecraft Festival is a theatrical celebration of the works of H.P. Lovecraft. The inaugural festival will take place February 6-11, 2018. Here’s a list of all the shows scheduled:

A Nightmare in Ashcroft

Attention Ashcroft Citizens! You are cordially invited to attend preliminary investigations into the recent sinister happenings of your small northern hometown.

Inspector Legrasse is presiding, and the truth WILL be uncovered. Whatever the consequences… This new immersive production from Raising Ashes theatre, loosely based on A Shadow over Innsmouth, will cloud your mind, and likely draw you deeper into the Lovecraft myth than you ever could have imagined.

The Society of Strange

From the creators of the Olivier Award-winning Showstopper! The Improvised Musical, a fresh new take on improvised theatre. Sometimes funny, sometimes creepy, The Society of Strange spins tales of the macabre and uncanny out of audience suggestions.

If you thought improv was only comedy, think again and prepare to be spooked. Inspired by writers such as Neil Gaiman, MR James, Mary Shelley, HP Lovecraft, Stephen King and the ‘weird tales’ movement of the 1920s – 30s. ★★★★ ‘Unique and pushing the boundaries of improvisation’ Broadway Baby

The Thing on the Doorstep: Asenath’s Tale – WORLD premiere

Viola has a problem. Her best friend Asenath doesn’t seem to be quite right. In fact, she may be just a little bit dead…

Building upon “The Thing on the Doorstep,” “Asenath’s Tale” is an original adaptation by T.L. Wiswell that expands the mythos by telling Lovecraft’s tale of necromancy from the view of a female master of the darkest of arts. WORLD PREMIERE.

Lovecraft’s classic short story is brought to the stage by The Other Realm Theatre Company in an original adaptation by Adrian Jameson. This faithful retelling of the original 1926 text features stunning (and horrifying) artwork by Robin Stevenson alongside vintage props, creating a true sense of the bygone age that Lovecraft inhabited.

Pickman’s Model received rave reviews during its premiere appearance at the 2017 Brighton Fringe Festival and is not to be missed! The Other Realm Theatre Company, a specialist in horror theatre, was formed in in 2015 and is led by Artistic Director Adrian Jameson. Pickman’s Model is the Other Realm’s first adaptation of another author’s work and as Adrian observes, “Although we have stayed faithful to the time it is set (1926) much of Lovecraft’s work has a timeless feel to it that we hope we have captured, while at the same time introducing one of the great writers of Horror Fiction to a new audience in 2017”

Hidden Basement’s The Shadow Over Innsmouth

On a frankly tedious architectural tour of the coastline, Robert Olmstead happens across the ancient seaport of Innsmouth… What he discovers there will threaten his life, test his will and shatter his sanity. Featuring original music, puppetry and physical theatre, this darkly comic fast paced two hander brings a HP Lovecraft classic to the stage as you’ve never seen it before, and explores the complex and sometimes deadly relationship between man and fish. “Lovecraft’s much loved, sombre and dramatic story is delivered with sinister ease. An absolute gem! An excellent darkly comic show.” 5 *** – The Spy in the Stalls “Whimsical, funny and entertaining.

Six years ago, Miskatonic University sent a team of researchers to explore the geology of the Antarctic. The catastrophic outcome was deliberately shrouded by expedition leader Professor Willa Dyer and her graduate assistant Frances Danforth.

Now, with a new expedition proposed, Dr Dyer wants to set the record straight – beyond what was in the newsreels sent to the Arkham Advertiser – about what really happened in that “cryptic world of frozen death” – the “Mountains of Madness.” Three voices, from the past and the present, narrate the harrowing events of that journey, some unaware of their ultimate fate, some still bearing the trauma of recollection.