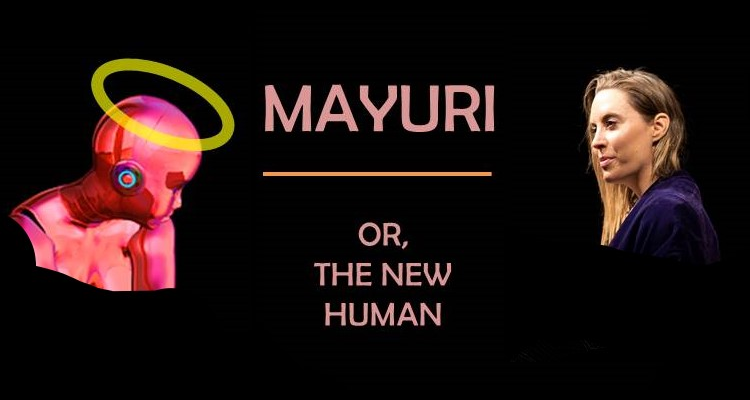 Following an existential crisis, Mayuri leaves her human life behind, befriends the android Riza and has her mind transferred into a machine. Alienated by humans and robots alike, she embarks on a haunting journey of self-discovery, violence and despair… Her life keeps changing while a cult starts following her like a god.

Mayuri is a one-woman sci-fi play for a goddess and a priest; a dystopian storytelling experience; a sermon for the Cult of Mayuri on a strange island in the Mediterranean Sea.

Cyborphic is a science fiction & Greek theatre company run by theatremakers & theatre scholars Christos Callow Jr & Andriana Domouzi. It seeks to promote science fiction in the theatre, as well as the work of contemporary Greek artists in the UK and new versions of classical Greek theatre, especially lost Greek drama.

Liza is a film and theatre actress; a writer herself and a sci-fi fan, thus also partly Greek & geek. She’s worked on Mayuri before during its R&D stage and for a rehearsed reading of the play at Talos 2019.

From 21 June – 31 August, K+C Festival will bring people together to celebrate, inspire, and be inspired. They are co-creating a diverse programme with local, national and international artists, their communities, organisations and the wealth of talent behind the scenes whose careers have been on hold over the past year.