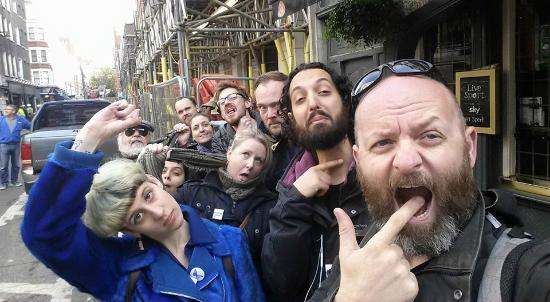 Michael and his team at Murder Mile Walks have been hailed as hosting “London’s best murder walk”, “truly terrific”, “chillingly good fun”, “dark, witty and well-researched” as well as “a great grisly morning of murder, mirth and mischief”.

GET YOUR TICKETS HERE

With 12 MURDERERS, across 15 LOCATIONS, totalling 50 DEATHS in just two hours, over barely a mile, Murder Mile Walks feature cases such as “Britain’s most notorious serial killer” Dennis Nilsen, Soho’s WW2 slasher The Blackout Ripper, maniac William Crees, the strange defence of Peter Keim, Britain’s notoriously competent hangman William Calcraft, the Denmark Street Fire, as well as unravelling the mystery of The Soho Strangler, and the real truth about Jack the Ripper… to name but a few.

What better way is there of spending a Sunday morning than by helping solve an 80 year murder mystery, meeting some new friends and having a pint in a serial killer’s favourite pub? Or, if you’d prefer to arrange a private Murder Mile Walk, contact Michael through the messenger tool here.