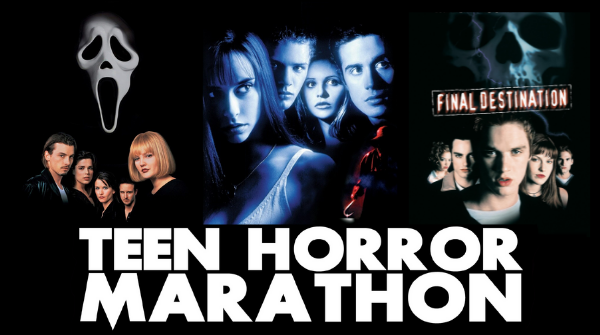 SCREAM [1996]: The sleepy little town of Woodsboro just woke up screaming. There’s a killer in their midst who’s seen a few too many scary movies. Suddenly nobody is safe, as the psychopath stalks victims, taunts them with trivia questions, then rips them to bloody shreds. It could be anybody…

I KNOW WHAT YOU DID LAST SUMMER [1997]: A year after running over a fisherman and dumping his body in the water, four friends reconvene when Julie (Jennifer Love Hewitt) receives a frightening letter telling her that their crime was seen. While pursuing who he thinks is responsible for the letter, Barry (Ryan Phillippe) is run over by a man with a meat hook. The bloodletting only increases from there, as the killer with the hook continues to stalk Julie, Helen (Sarah Michelle Gellar) and Ray (Freddie Prinze Jr.).

URBAN LEGEND [1998]: gruesome murders that resemble old urban legends. When her friend Michelle (Natasha Gregson Wagner) is killed by someone hiding in her car, Natalie (Alicia Witt) begins to notice the pattern. Her suspicions grow stronger when her own roommate is strangled to death. Soon the quiet college campus is transformed into hunting grounds for a maniac, and Natalie struggles to find the killer and stop the bloodshed before she becomes the next victim.

THE FACULTY [1998]: To the students at Harrington High, the principal and her posse of teachers have always been a little odd, but lately they’ve been behaving positively alien. Controlled by otherworldly parasites, the faculty try to infect students one by one. Cheerleader Delilah (Jordana Brewster), football player Stan (Shawn Hatosy), drug dealer Zeke (Josh Hartnett) and new girl Marybeth (Laura Harris) team up with some of their other classmates to fight back against the invaders.

FINAL DESTINATION [2000]: After a teenager has a terrifying vision of him and his friends dying in a plane crash, he prevents the accident only to have Death hunt them down, one by one.