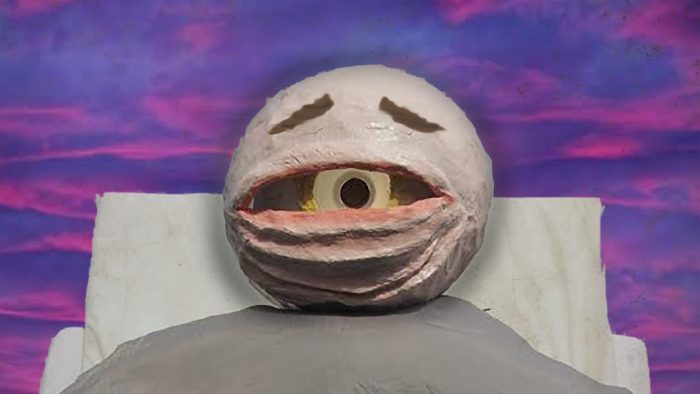 Descend into the dizzyingly distorted depths of the sleep deprived brain. A brain running on pure steam, fraying at the edges, grappling to figure out… what’s happened?!

Mr Nod journeys into the obscure and the fantastically surreal cubby holes, the chaotic under-stairs closets of consciousness, to question how far removed from reality a person can be without even knowing it…. and if they can claw their way back.

A dark and theatrical multimedia comedy with ACTUAL true fact science, we see the world from his “Brain’s eye view” as Mr Nod fights to navigate his mundane life as the day and night terrors loom. Here, amongst mental illness and his exhausted misfiring brain, a jet black magi-comical nightmare reigns.

Starting with the first days trapped inside his mother’s noisy, cramped womb, Mr Nod never truly slept. Forever stuck in his own brain, the debate between reality and fantasy rages from the dolphins that berate him at night to the group of outcasts that move into his house. But this is a story of lost love; where did she go? Now he is in the interrogation room and he’s not the only one giving statements, who did it, who’s lying, or if it was him!?

“When I try to sleep I experience something attune to an intravenous shot of psychedelic self awareness, a tab of the bad acid Dennis Hopper took in Easy Rider. It circulates my body, remixing my circadian rhythms into a free form Belgian jazz quintet, relentlessly painting a Dali on the insides of my eyelids” Edward Nod, interviews on sleep deprivation Oct 7th 2012, Surrey Sleep Research Centre.