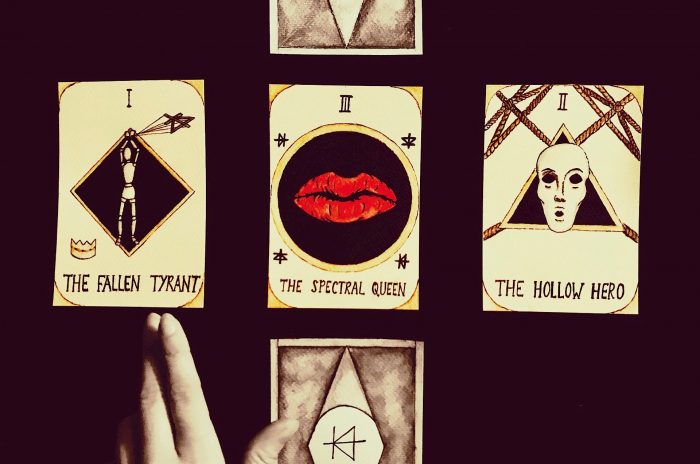 The battle has been lost and won.

The Fallen Tyrant lies dreaming in the time-less void of a prison cell. The Spectral Queen haunts the shadows, a memory of what’s lost, a promise of worse to come. The Hollow Hero props up a worthless kingdom, abandoned by a murdered family.

As the unsteady world shifts, the Hero is left with one option – deal with the devil. Clarice to the Tyrant’s Doctor Lecter, the Hero seeks guidance from this monster he hoped to forget – a man reputed, with his dead wife, to be a treacherous usurper steeped in blood and witchcraft. For the Tyrant, this first human contact in weeks could present an opportunity to raise himself out of the madness of these endless, empty tomorrows… unless his confinement is already less solitary than he’d dare to admit.

As jailer and jailed meet, elusive power shifts at a moment’s notice. And where is Wild Kate? All search for a future. The tarot cards are dealt. But is the deck stacked by forces you only glimpse in the corner of your eye? Follow us, close – enter a Lynchian recess in reality. Scream Babooshka and consider a creeping truth: we are such stuff as nightmares are made on.

GOLEM! sheds new light on stories you think you already know. Following acclaimed successes Macbeths (2016) and I Know You Of Old (2017), they return to push the boundaries of adaptation yet further with David Fairs’ Tomorrow Creeps, a new play orchestrated from sixteen Shakespeare texts and inspired by the storytelling of Kate Bush. Featuring Conor O’Kane and David Fairs, it is directed by Anna Marsland (National Theatre’s The Curious Incident of the Dog in the Night-Time) and produced by Sarah Lambie for GOLEM!.