This possession film (tries) to cater both to supernatural fans as it does for drama/horror fans. Co-written by John Selvidge and director Mickey Reece, Agnes is not your run-of-the-mill possession film. It is a very slow burn horror with an odd sense of humour. The first half is set in a convent wherein the titular nun is possessed by an evil spirit. The Church allocates an unconventional priest, Father Donaghue, who has allegations of sexual assault behind his name, and soon-to-be-ordained priest Benjamin to deal with the possessed nun. 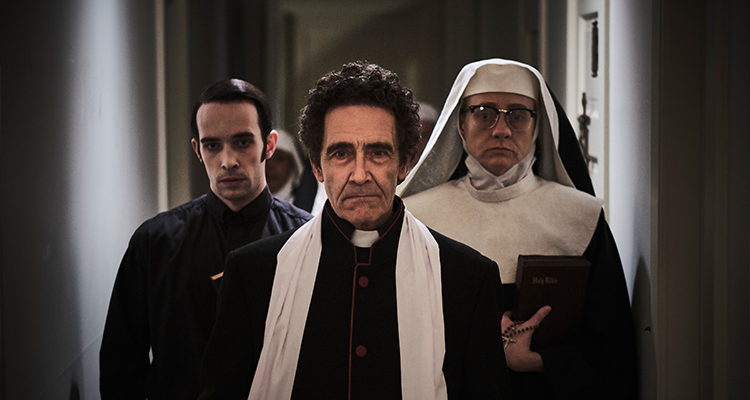 At first Father Donaghue does not believe Agnes is really possessed. When they meet, however, Agnes attacks him biting the tip of his nose off and screaming ‘Father touched my wee wee’. Shocked at how she would know such a thing about his past, Father Donaghue becomes convinced of her supernatural affliction.

The possession scenes are contrived and do not offer major scares and they present the regular swear words of your typical possession film and tropes. However, the lack of really horrific moments are not a fault of the film as it is clear that Reece relies more on creating atmosphere than scares, while adding comments in dialogues that add a feeling of parody while poking fun at the Church as an institution.

Sadly, the characters who poke fun at religion in this film are connected with paedophilia. Father Donaghue does not believe in the Church anymore and cannot fathom why Benjamin would want to join it. The first question he asks is whether Benjamin is ready to be celibate, implying that for him that is the hardest part. The older priests who have set Father Donaghue and Benjamin on this quest also make fun of sexual misconduct by saying that Benjamin has got nothing to worry about regarding Father Donaghue since he is a ‘grown man’.

These not-so-subtle hints place these characters as against the real values of the Church, described as ‘medieval woo-woo’ and archaic. Therefore, for the viewer, there is not much or many to identify with in this film. On the one hand, you side with Church with its old values; on the other, with men who find sexual abuse funny… Might as well identify with the possessed Agnes.

The convent is riddled with nuns who have, undoubtedly, lost their faith – they smirk when they see Father Donaghue and Benjamin and comment upon their good looks. They poke at each other, but more than everyone, Sister Mary seems to find in Agnes someone to relieve her guilt and leaves the Church. 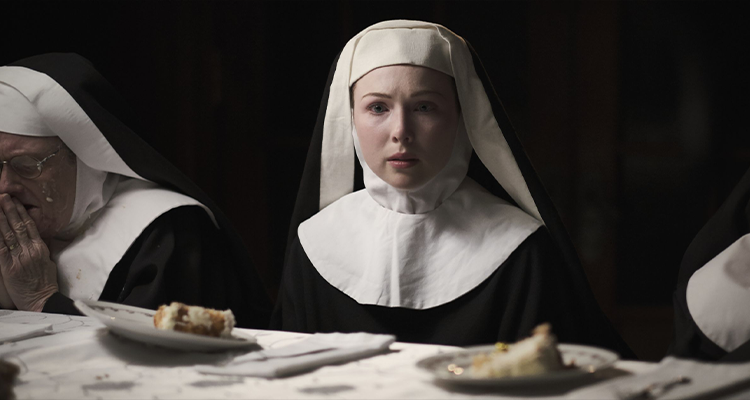 The second half of Agnes follows Mary out of Church and into the real world. There is a sudden change in tone and subject as the film drops the convent setting, and its already-established characters, to now follow Mary. She quickly finds she is ill-equipped to deal with the real world, especially the men in it.

While Mary’s journey is interesting, the film does not do her justice. It becomes difficult to be interested and invested in the second half of Agnes, having the film abandon the possession plot altogether. Agnes clearly packs two films in one and unfortunately it does not work as much as it would have worked had it followed just one storyline.