Avant-Macabre is a 6-minute black and white, silent(ish) horror film by John H Shelton. It features only a few characters, and its main content is voice-overs reading original poems. I have not watched many short horror films in my life (other than bingeing on BBC3’s The Fear), so did not know what to expect when asked to write a review for this film.  Thankfully, I was pleasantly surprised. 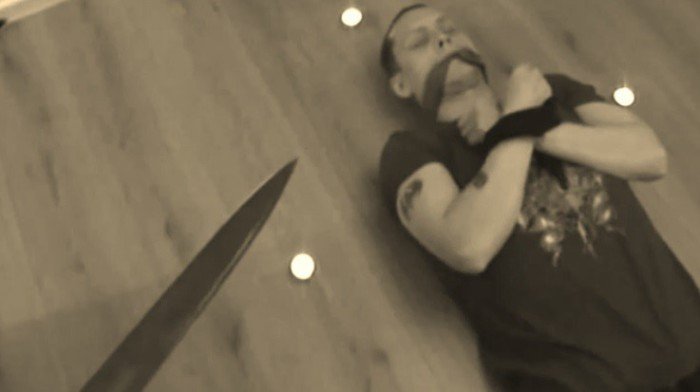 I did wonder if the man on the floor was meant to be unconscious, as I saw his eyes and lips moving during the side view shot.  The voiceover during this section is a woman reading a poem with the repeated words “drip follows drop follows drip”.  I loved this.  It was very well written and delivered.

The film then switches to the cloaked man repeating the above mantra.  This had a creepy effect and I really started to worry for the tied-up man on the floor.  This section ends with a baby crying, which confused me as I am not sure what that meant.  Where did the baby come from? Was the man supposedly reborn?

The second section switches to two more voiceover poems, and we see a man creeping through the woods.  The footage takes on a more psychedelic feel with blurred black and white figures, trees and movement.  You find yourself blinking to make sure your eyes aren’t failing.  This rather grainy, fuzzy effect is almost like watching a long forgotten VHS tape, which has seen better days – some parts I couldn’t quite make out (was that a giant spider?!). This section of the film is completely different to the first, both in style and story – you almost get two films for the price of one!

Overall, I preferred the first section of Avant-Macabre as it had more of a natural story, which is my favourite kind of narrative but you can’t help but admire Shelton taking a risk and trying different styles of shooting and writing a horror short.  The voiceover poems are really effective, the black and white gives the whole film a 1930’s feel and the background music is used to eerie perfection.

It was hard to tell which parts were additional footage, which is credit to Shelton’s editing skills.  My favourite camera shots were of the man stalking the corridors in the first section as he filled the entire space, horrifying to realise that, try as you might, you are not going to escape the cloaked man’s clutches.

If you have a spare 6 minutes (of course you do, you’re not that busy), then I urge you to find a dark room, light a candle, turn up the volume and watch Avant-Macabre.  Let’s just hope you don’t wake in the middle of the night to hear “drip follows drop follows drip” as you may not be alone…