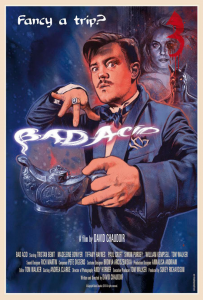 I first became aware of David Chaudor’s Bad Acid at one of the London Horror Society’s short film screening nights last month. It was actually screened along with another of David’s shorts, ‘Adonis & Aphrodite’.  If you haven’t seen that either it’s well worth checking out too!

After all the talk, I was certainly intrigued by what Bad Acid may bring, and I wasn’t disappointed. Before I give you my thoughts I’d like to borrow from its website www.badacidmovie.com and share the synopsis:

“Marvin Maskelyn is a washed up TV hypnotist whose fame and fortune has run out.

After losing his, he acquires a genie lamp with a chequered past and some LSD blotters within. With nothing left to lose, he takes one.

Maskelyn’s visions of success are haunted by a malevolent presence. A wry, dark fantasy on the price of fame.

Bad Acid is a love-letter to the British horror films of Amicus, Hammer and Tyburn” 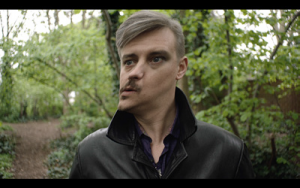 This may set you up for what to expect but doesn’t do justice to how exceptionally well written and produced the film is.  You’re immediately thrown into a working man’s club in Yorkshire, and can clearly pick out the desperation of the lead character, such is the immerse power of the world David has created.

Marvin is hypnotist looking for that one last hurrah from a career that has plummeted, and now is quite frankly floundering. He craves the higher levels of fame again and you genuinely empathise with his character in terms of how much he hates the situation he has found himself in.

You’re then taken on a ride (or trip if you will) with Marvin and his assistant Amanda… You’ll cringe when he gets called a ‘wazzock’ after hypnotising someone… You’ll feel his despair in searching for that one lucky break…  This all thanks to the sharp, absorbing and hilarious dialogue.

The underlying tone of Bad Acid is summed up when Marvin is asked what he wants by the ‘presence’:

The desire to get back what he lost, to return to the heights he once reached and to simply be that person again.

This in essence is the brilliance of Bad Acid. You are in his world and you want to see how he will try to recapture his fame next. The environment, especially Marvin’s flat, shows you the situation he finds himself in and what he is surrounded by. 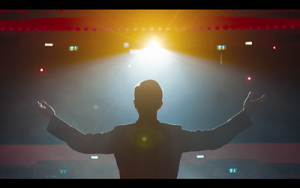 Bad Acid will have you hooked. It’s subtle in its impact, the gore and violence is implied, leaving much to the mind and thus, much like hypnosis, relies on the power of the mind to empower what we think. Therefore the ‘presence’ that is unleashed is enough to terrify anyone into doing anything, and the actors do a great job conveying this terror.

The end swipes you from the side, leaving you with enough information as to what happened but creating an anticipation for more.

I really believe Bad Acid could go on to be made into a feature length movie.  There’s certainly enough there to build on and explore, as well as tune into the terror that underpins this amazing short.