I’m not going to lie, I wasn’t sure what to expect with Bird Box.

But it has Sandra Bullock and the trailers are awesome.

So, I figured why not? 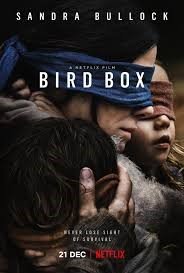 If I had to explain this film in as few words as possible, I’d say:

We meet Malorie (Bullock), a pessimistic artist who’s been dumped by her boyfriend whilst expecting her first child.

She isn’t excited about being a mother. In fact, she’s bitter about it.

We’re introduced to her whilst an epidemic unfolds.

Her sister, Jess (played by the fabulous Sarah Paulson) is concerned about what’s going on in the world but remains positive when it comes to Malorie’s pregnancy.

Things escalate quickly when, after a routine visit to the doctor, everyone around Malorie starts running in terror, killing themselves and each other in the process.

Jess, unfortunately, isn’t immune to the chaos and crashes the car, Then, despite Malorie’s best efforts to stop her, she walks out in front of an 18-wheeler and dies.

Everyone is talking about the invisible monster that manipulates people into killing themselves with images of either their worst nightmares, or some type of seducing image.

Malorie holes up in a house with a group of strangers, all trying to avert their eyes from the menace outside.

Now, while this storyline is going on, we also keep going 5 years into the future.

We follow a now toughened Malorie, with two children in tow, journeying through a cold and foggy river. They all wear blindfolds and carry two birds in a box.

As we keep going back and forth between the timelines, we see Malorie attempting to engage with the other survivors as well as bond with Tom (talented up-and-comer, Trevante Rhodes) who takes the time and effort to care for Malorie.

Obviously, they fall in love.

As an audience member, I was watching and trying to figure out how we get from Point A to Point B and how Malorie grows as a person. Sometimes not in the best of ways.

We see this woman who would rather be anything than a mother, become the ultimate mother. Not just through love, but determination, stubbornness, and the will to survive.

I think this goes back to what I said earlier: Bird Box is a film about survival and love.

Honestly, I could write an entire blow by blow account of this film, but instead I’ll sum up in a few sentences.