FILM REVIEW: BOYS IN THE TREES

As atmospheric and surreal as it is oddly relatable, Nicholas Verso’s directorial debut, Boys in the Trees, corrals viewers into a 90’s time capsule. 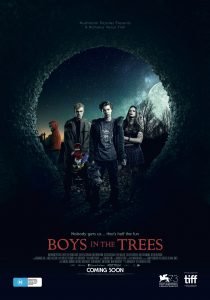 It delves into the unlikely reunion of two estranged friends on Halloween.

Bewitched by the mystical allure and adolescent wonders of Halloween, I find it as no surprise this film found its way to my Netflix library.

Debuting at the 2016 Toronto International Film Festival, Boys in the Trees found an audience with horror fans around the world.

After hearing so much about this film (good and bad) through a multitude of horror blogs and social media sites, the urgency to watch this film grew.

I had to find out whether the hype is justified.

From its youthful, emergent cast to its star-studded soundtrack (boasting tracks from rock royalty such as Bush and Marilyn Manson), Boys in the Trees needs no lesson in creating a unique and stylish dark fantasy film, that’s for sure.

But is that all there is to the film? All style and no substance?

Wolves May Lurk In Any ‘Guise

Set in Australia in 1997, Corey (Tobey Wallace) and his raucous band of school mates, including the hedonistic and somewhat unhinged Jango (Justin Holborow), love to terrorise the meek and lonesome Jonah (Gulliver McGrath).

And I mean they really love to terrorise him.

From constant beatings to desecrating his late mother’s grave, the group’s transgressions hit a fever pitch when they throw a dead bird at his window on Halloween.

After giving Jango and the rest of his mates the slip, the reverent Corey agrees to walk Jonah home – as he did when they were friends.

It’s here where the lines between reality and fantasy begin to blur as Jonah convinces Corey to play a game of Cocytus, a childhood game the two played in which anything, including monsters and supernatural powers, are possible.

Exploring themes of growing up and bullying, Boys in the Trees effectively represents these all too familiar coming-of-age maxims, using wolves and shadow creatures known as darklings.

The wolves and darklings are representative of what we as humans know as bullies: carnal, thrill-seeking hedonists with little regard for anyone but themselves.

As the film showcases Corey and Jonah periling the streets on the “night of the great delight,” we experience our fair share of laughter, excitement, pain, and sorrow.

I’ll reveal this now – this film isn’t for the faint of heart.

But while this depiction of teenage hijinks and cruelty may be disturbing, it doesn’t necessarily mean there aren’t any beautiful moments.

The on-screen chemistry of Wallace and McGrath is succinct and on point, leaving audience members to ponder if the duo’s friendship extends beyond the camera.

In addition to the acting, the ambient and brooding set, littered with skeletons, ghosts, mischief, tricks, danger, and excitement, truly establish this as a visually masterful Halloween film.

‘Tis the Night of the Great Delight

While critics may have something else to say, I think Boys in the Trees has the makings of a Halloween cult-classic.

Yes, some claim it has minor flaws, but these have little significance in comparison to the things it does well.

While I can’t necessarily classify this as a horror film, I can say Boys in the Trees paints a dark, yet all-too-real portrait of society through the eyes of a young, angsty teenager.