Film Review: Doctor Strange in the Multiverse of Madness

Whilst not normally within the remit of The London Horror Society to review Marvel superhero blockbusters, it felt necessary to cast our eye on a Sam Raimi movie being billed as the MCU’s first horror film. Hugh went along to cast his eager eyes over Doctor Strange in the Multiverse of Madness… 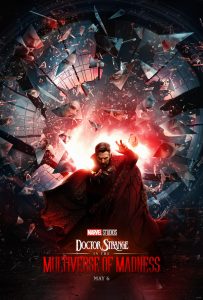 In 2016, horror director Scott Derrickson (Sinister, The Exorcism of Emily Rose) was tasked with bringing to life one of Marvel comic’s trippiest, darkest heroes in the guise of Doctor Strange. While saddled with a fairly formulaic origin story, Derrickson was able to insert discombobulating beats of horror and psychedelia that rose the film above the confines of its script. Undercutting the traditional ‘big battle’ in the final act that accompanies much of the MCU’s output, he delivered a film that had an ending where the hero used his wits to save the day in a magical, kaleidoscopic finale that left us hungry for more.

Which is why, when it was announced in 2020 that Derrickson was stepping away from the sequel due to ‘creative differences’, my heart sank a little. Marvel Studio’s boss Kevin Fiege was touting the Doctor Strange sequel as Marvel’s first horror film; in dropping one of the best horror directors working today, I couldn’t help but be incredibly disappointed in their lack of bravery and ambition.

Picking up the baton was an icon of horror cinema who had been out of the game for over a decade. Not only that, but a director who had found his greatest successes (and arguably biggest failure) in the world of Marvel superheroes with his Spider-Man trilogy. The MCU was about to get groovy. 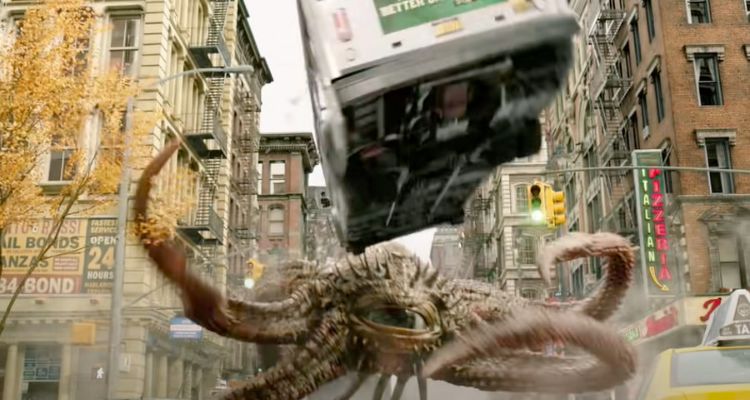 And so finally, after years of anticipation, rewrites, Covid delays and reshoots, Doctor Strange in the Multiverse of Madness arrives in cinemas as the 28th movie in the Marvel Cinematic Universe. And while the film definitely feels authentically like a Sam Raimi film above all else, there are some narrative issues and conceits to the genre which stop the film from achieving true greatness.

We pick up our story some years after the climactic ending of Avengers: Endgame where Doctor Strange was instrumental in saving half of the known universe from Thanos. Sacrificing his personal happiness and the love of his life, the good Doctor finds himself struggling to find his place in a world that he swore to defend. When youngster America Chavez, a magical being with the ability to traverse the vast multiverse, reveals to him that she desperately needs his help to save her from an unstoppable demonic presence, Doctor Strange turns to his former Avengers teammate, Wanda Maximoff, for help.

But Wanda has been living a quiet life of contemplation and reflection since the events of Disney+ mini-series WandaVision, where in addition to losing her two children, her abilities were revealed to be tied to a terrifying being of unstoppable power; The Scarlet Witch. Whether she will be able to help Doctor Strange or not, the bubbling malevolence that threatens her soul may prove too much for either hero to truly contend with.

Now, let’s be frank. That is a LOT of back-story you need to be aware of. 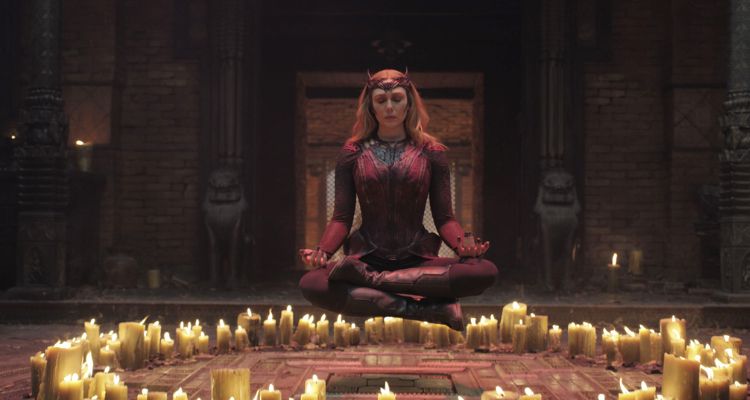 And while casual audiences may lose some of the finer points of Multiverse of Madness’ plot, seasoned MCU fans will find its place in the greater narrative to be satisfying and infuriating in equal measure. The MCU does not operate in the way traditional cinema does; it is a franchise that builds explicitly on what has gone before it and uses those ties to build a cohesive narrative whose emotional weight is often vitally felt by the heft of those combined stories. Much like the comics themselves, there will be concessions to allow most people to follow individual films without any huge problems (with some notable exceptions), but for the full picture then further reading and viewing may be required.

Multiverse of Madness is a rollercoaster of a film; a carnival ride made celluloid. It opens in the midst of a climactic, apocalyptic battle in the heart of the multiverse, and within twenty minutes the film plays as an extended chase through universes as the demonic presence hounding America Chavez makes itself known.

Raimi creates astonishing visuals that rival anything the MCU has done before, with magical battles between sorcerers and witches full of bombast and colour that take full advantage of these films’ limitless budgets. A particular scene where Doctor Strange weaponises musical notes on parchment paper, creating a symphonic battle between magicians is as unique as anything I’ve seen in this franchise. And Raimi fills the frame with visual flourishes that fans of his work will get a kick out of; zoom-pans, dutch angles and fourth wall breaking moments all add to the feeling that Multiverse of Madness is unique among the occasional homogeny of the MCU.

Sold as Marvel’s first horror film, Raimi is allowed to dig into his horror roots to deliver the kind of funny, gruesome slapstick horror that Evil Dead fans will relish. There are zombies, spirits (who sound and behave suspiciously like the Deadites that made his name), evil books, jump scares, monsters and some unsettling body horror that really push at the limits of that 12A rating here in the UK.

Having seen the film with my ten-year-old daughter, I can confirm that the film is just scary enough to work without being overpowering for a young audience. Films like this are crucial for introducing children to horror, and we should relish the fact that Marvel are willing to take a big swing with this one.

Those expecting cameos aplenty may wish to temper their expectations. Multiverse of Madness does lean into the concept of multiple versions of our favourite heroes (I think there are four Doctor Stranges!), but wisely chooses not to overstuff the film with them. A central scene where Doctor Strange is confronted by the Illuminati (think a multiversal Avengers) provides a couple of crowd-pleasing appearances, including one that the internet seems to have willed into reality over the past five years. Though the scene doesn’t last long enough to derail the momentum of the movie or detract from the central threat, it remains a lot of fun and one of the high points of the film (the best cameo comes in the form of a street vendor earlier in the film anyway…). 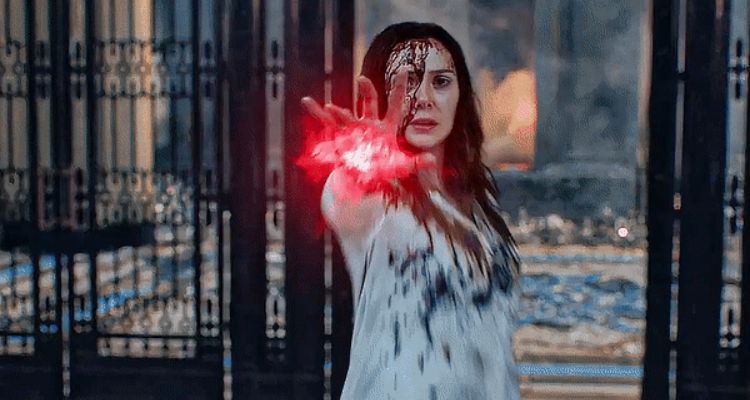 The film’s emotional beats will vary in success from viewer to viewer. As a long-time fan, watching Wanda Maximoff’s story arc (within the confines of the film) was at times infuriating, thrilling and heart-breaking. Elizabeth Olsen is a terrific actor who had been largely underused by Marvel until WandaVision, the range she showed in that series and in this film is genuinely breath-taking. It is exciting to see where she will turn up next.

Benedict Cumberbatch has grown into the part of Stephen Strange over the course of his six appearances in the role. Initially a little stuffy and stilted under a questionable accent and remarkable goatee, he has found a groove in the character that has made him the anchor point for the franchise in the absence of Robert Downey Jr. and Chris Evans. Xochitil Gomez gives an incredibly likeable performance as America Chavez, a character with a big future in the MCU if the comics are anything to go by.

While Gomez gets a reasonable amount of screen time to establish her character, several of the cast are reduced to little more than bit-part appearances. The always brilliant Rachel McAdams gets more to do in this film than she did in the original, but it still feels like a waste of a terrific talent. Similarly, Michael Stuhlbarg shows up for a single scene in the film wearing a magnificent wig and a weary expression, but it just makes you wonder why they bothered having him in it at all (this is not a slight on the great Michael Stuhlbarg. Stick him behind the mask and cast him as Doctor Doom. You’re welcome, Marvel). 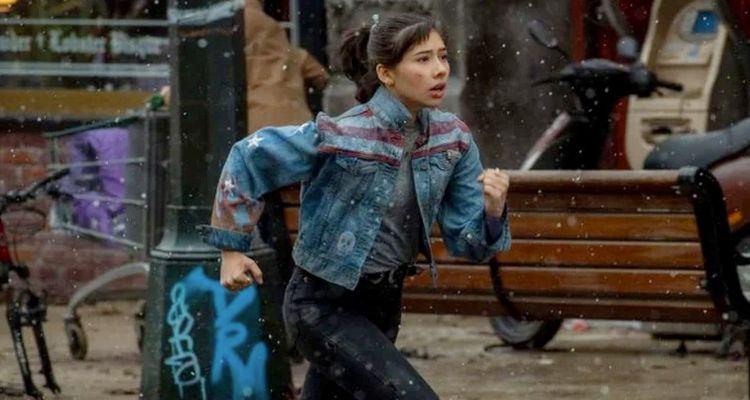 The script by Michael Waldron feels a little clunky. There are references to events and moments that even a seasoned MCU fan will be left scratching their heads at, which seem to have been inserted to bridge the gap between script and story. And the development of one key character from the last time we saw them in the story to now feels like a hasty bit of retconning in order to get to the meat of the plot quicker; I do wonder if the film’s extensive reshoots retooled this movie to the detriment of the script. While mostly the film looks terrific, there are several VFX that don’t quite work and rather than having the desired ‘shock’ the director is going for instead fall flat and a little silly.

Doctor Strange in the Multiverse of Madness succeeds as Marvel’s first foray into the horror genre. Raimi has clearly been allowed a lot of visual freedom to create some truly ghastly moments that will have younger audience members squirming in the chairs and the adults in the room will love. Racking up a surprisingly high (and at times shockingly bloody) body count, the film pulls no punches as it slithers towards a rewarding, funny and sad ending atop a spooky snow-covered mountain.

Marvel fans may be left slightly baffled by the goofy, silly tone the film sometimes strikes if they are unfamiliar with Raimi’s work.

To them I say only one word.