Horror movie experiences can come and go, but it takes a well-crafted horror film to stay with you. I’ve had several horror films that have left a lasting impression, whether it be a character’s evolution through the film, the storyline or even the ending, and Eden Lake was one such movie for me.

Eden Lake is the tale of Steve (Michael Fassbender) who is planning to propose to his girlfriend Jenny (Kelly Reilly) at an isolated lake.  but their seemingly innocent trip takes a deadly turn when they encounter a group of teens, who have deviant plans for the couples getaway weekend. Steve & Jenny wrongly believe their first encounter – one of petty vandalism – with the teens will be a one time occurrence, but soon things escalate to more violent means.

Throughout Eden Lake the brutality and fear the couple encounter at the hands of these local teens is intensified. The torturous and sadistic scenes helped to elevate it stand out from other similar counterpart films.

What I also enjoyed was that it showed a strong female character, that wouldn’t back down during adverse conditions or situations. Although her emotions were visible during the film, she always kept her wits about her. Director and writer James Watkins did a captivating job of keeping the story on track and levelling the suspense as the film progresses to its shocking conclusion.

Although it received mixed reviews, this really resonated with me.  Mainly because I love to travel, and one of my key worries is always safety. Whether your vehicle breaks down with no one in sight to help, or GPS directions causing you to make a wrong turn in a less than safe neighbourhood. 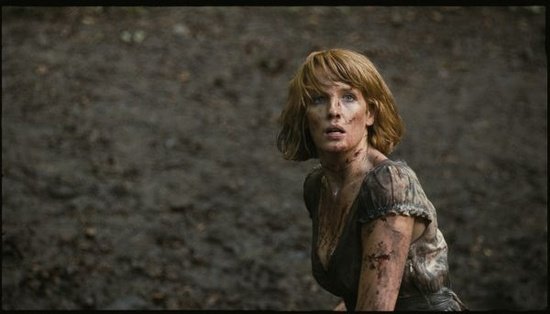 These are just a few of the worrisome encounters travellers can experience, and I for one have worried about them all (and then some). Eden Lake plays so very well on this fear. It takes a couple in an unknown surrounding and pits them against vengeful individuals who know the lay of the land far better than them, and that is truly terrifying.

Even if you didn’t find this film as memorable as I did, just for a moment put yourself in the place of Jenny and Steve. Imagine being in a totally unknown place, knowing that you’re essentially being stalked by an individual or a group of people, and you have no idea how to get out of the situation…

That, for me, is truly terrifying.

Have a horror movie that stuck with you? Let me know @horrorevilqueen