I’d been pretty psyched about the release of Get Out since I saw the trailer doing the rounds on Facebook a few months back. And, unlike most recent horror films, this one lived up to the hype. 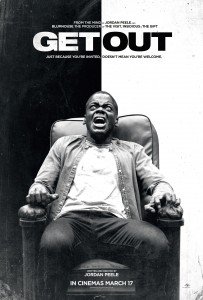 This is Jordan Peele’s debut as a director, as he is usually a star in front of the camera rather than behind it. However, if this film is anything to go by, he seriously needs to get cracking with directing more horror films.

That said, to pigeon hole Get Out into just one genre is a hard job to do. If I had to, I would place it somewhere between horror, thriller and mystery, not to mention a hint of comedy coming from LilRel Howery’s character.

I recognised the male lead, Chris (played by British actor Daniel Kaluuya), immediately from the several British TV shows he’s appeared in such as Skins, Black Mirror and Psychoville. In Get Out he plays loved-up boyfriend of laid-back beauty Rose (Allison Williams). If I’m honest, I didn’t recognise her like I did Kaluuya, but that’s not to say that I wasn’t impressed.

The chemistry between the two lead characters is superb from the off. There’s a scene where the couple hit and kill a deer on their way to Rose’s family home, that shows the audience just how strong their relationship is.

It also introduces the issue of race, which is tackled throughout the movie in a pretty radical way. In this part of town, it seems that a black man travelling home to his white girlfriend’s house is more shocking than having salt on your cornflakes.

I thought there was something fishy going on, especially as Rose had led Chris to believe that she came from a family and town where everyone would be as laid-back about her dating a black dude as she was. 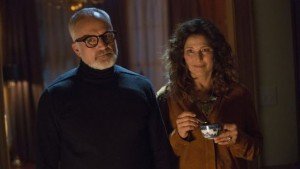 It isn’t until Chris is introduced to Rose’s brother, Jeremy (Caleb Landry Jones, Contraband), that the film starts to veer in a direction that I didn’t expect. I knew it was a thriller but I had no idea quite how messed up it was going to be.

Not only do we learn around the dinner table that Jeremy is pretty racist, but I honestly wanted to cover my eyes as a result of the uncomfortable nature of that scene. And it certainly sets the tone for the rollercoaster ride that follows…

From the crazy psychologist mother who hypnotises people out of bad habits (as well as ridding them of a few other things they never asked for), to the creepy children-of-the-corn-type guests at her family party, Chris has more on his plate than just meeting the in-laws! Thank God for his best friend Rod, who offers him and us the audience, a hint of comedy relief to our genre-cocktail.

Get Out isn’t just a horror movie, and it’s certainly more than a thriller. I wish I could say more but I don’t want to ruin the element of surprise for those who are yet to see it. All I can say is that it is unlike anything else you will have seen in a long time.

I’ve read several reviewers and bloggers compare it to Drew Goddard’s Cabin in the Woods and I can kind of relate. It’s a mix-up of genres, takes a few twists and turns that you won’t see coming, and ultimately attempts — and succeeds — in trying something new. However, unlike Cabin in the Woods, Get Out has more depth, more substance and is likely to stay with you for some time after you leave the theatre.

Get Out is exciting, tense and superbly acted and I’d be shocked to hear anyone disagree.