To say I was (and still am) a huge fan of the original Ghostbusters (1984), is an understatement. It was the movie that had every kid begging their parents for their own Proton Pack to go hunting around old buildings late at night looking for ghosts — or was that just me? I’m talking the original crew – Bill Murray, Dan Aykroyd, Harold Ramis and Ernie Hudson. I’m talking Slimer and the Stay Puft Marshmallow Man. I’m talking catchy theme tunes and green slime. That’s right everyone, I was a true ‘Ghostbuster wannabe’. 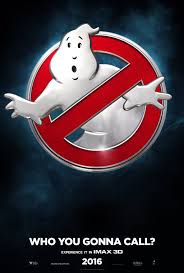 So, when I heard a few months back that ‘they’ were remaking this untouchable movie, I felt pained. Why on earth would anyone in their right mind want to destroy such a classic? Because, as you well know already, that’s what Hollywood does.  It takes a movie that was successful thirty years ago and tries to spin even more money off the back of it.

But being who I am, loving movies, the genre and the original as much as I do, I knew at some point I would have to succumb — despite my admittedly curious scepticism.  I mean, who could ever replace such a legendary foursome?

Women!!! What? How? Why? I felt angered that the original was obviously going to be tarnished by a hideous remake. Even though Melissa McCarthy is one of my favourite actresses, I just couldn’t imagine her pulling it off. But, after a week of denial, I decided to pluck up the courage and head to the cinema to watch the remake in, *sigh*, 3D. The trip would be worth a scoop of overpriced ice cream and popcorn, if nothing else.

But wait, what?!? From the opening scene I was hooked. I felt myself leaning forwards in my chair with anticipation, spoon-feeding myself calories in a trance. I loved it! I loved that they used some of the original soundtrack (with some funky beats thrown into the mix), the same logo and even a feminine hearse!

The cameos by the original cast were also an unexpected delight.  I loved that Bill Murray showed his face and of course, Sigourney Weaver too.  Honestly, I felt so nostalgic watching this movie I could have cried. Yes, that sounds a little hyperbolic but I was so relieved that I wasn’t totally hating this that I wanted to dance in the aisle.

The female Ghostbusters did a great job. Were they as good as Murray and the gang? No. But they were funny and likeable in their own way. I imagine they knew what they were up against and jumped into the roles knowing they had huge shoes to fill.

It really was such a fun movie, and I cannot praise it highly enough. Yes, there will be critics and there will be people who disagree with me entirely. But I ask you, what’s not to love about a movie that brings back Slimer and his girlfriend, and then sets them up in a car chase?  And to top it all off, Chris Hemsworth plays Kevin, the ‘bimbo’ receptionist. Need I say more? If you don’t like ghosts or any other part of the film, you could always just look at him!

Now, bearing in mind the film is rated 12A, there were actually a few scenes that made me jump. I threw several pieces of popcorn in the air at the sight of the beautiful apparition in the mansion spewing up ectoplasm over our Ghostbusters. Don’t get me wrong, I didn’t find the film frightening as such, but I could tell the small boy sat the row in front of me was getting spooked during several scenes. Maybe because it’s been billed as a family movie, but I simply wasn’t expecting to be creeped out at all. So this was a pleasant surprise. Some of the ghosts were actually pretty disturbing too. The electrocuted prisoner in the subway reminded me of something from Thirteen Ghosts.

Lastly, I adored the finale. I wish I had my old Ghostbusters ghost hunting kit so I could have jumped through the big screen into the movie set and helped catch some ghosts with them.

Overall, I thought Ghostbusters was carefully and cleverly done — they adapted the movie to bring it up to date pretty well. Of course, there was never any need to remake a film that was pretty much perfect thirty years ago, but when the potential for a total mess was so high, it gave me ninety minutes of enjoyment.  So perhaps this one was worth every bit of Hollywood’s money.