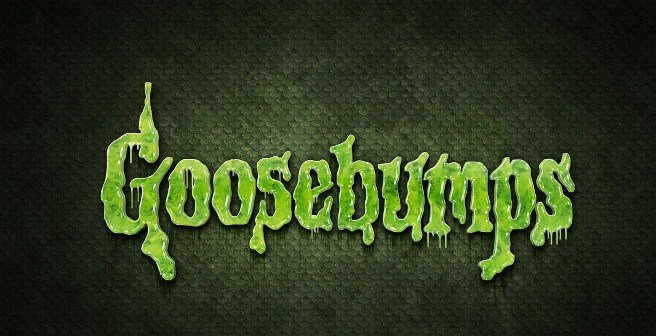 I’ve been looking forward to the release of this movie ever since I heard it was being made a few months ago. To say I was a huge fan of the Goosebumps books and R.L.Stine’s writing growing up, is an understatement. They were the only spooky books that I was actually allowed to read.

I remember as clear as anything unwrapping a yellow covered book one Christmas called Say Cheese and Die and then spending Boxing Day with my nose in its pages. I was instantly hooked and went on to read as many as I could lay my hands on (which unfortunately at the time was not close to the one hundred and twenty or so books that were written). When I couldn’t get my hands on any more Goosebumps books (I don’t think they were all available in the UK and without the internet it wasn’t possible to jump online and get them ordered on Amazon), I moved on to the next series of teen horror, Point Horror. But for now let’s talk about Goosebumps.

When I read that a movie was being made, the first thing that rushed through my eager mind was ‘Which of the books are they turning into a movie? What monsters are going to come to life on the big screen?’ I did a quick Google search and came across several articles. One interviewed the man himself, R.L.Stine, who said that when Hollywood approached him and asked which of the books to commission he just couldn’t decide and suggested writing a new book to include all of his creations. I mean seriously, this man is a genius, (he must be, the Goosebumps series sold more than 350 million copies worldwide!)

The first thing I did was buy and read the new Goosebumps book – yes you read it right – the NEW Goosebumps book – The Movie Novel. Not the most exciting title but it does what it says on the tin. Classic of his famous ability of entwining horror with children’s fiction, I was drawn into the story from the very first page. I suppose now being an adult, or at least that’s what my age tells me I am, the text is even easier to absorb and having read so many of his books and already being acquainted with so many of the monsters within them, my heart raced as my eyes darted from page to page. The book was superb and now that I’ve seen the movie, I’ll be re-reading it.

The release date has been marked in my diary in ink for what seems like forever. When the day finally came to head to the cinema with my horror movie companion, aka. Mum, I barely slept the night before.

So, the premise – a boy (Zach) and his Mum move into a house in a new town. Before long he is introduced to the pretty girl next door (Hannah) and her crazy father (Jack Black) who he calls Shivers. Of course later we discover that he is in fact R.L.Stine. We also welcome into the picture a boy called Champ who Zach befriends on his first day at Madison High School. I found his character funny in the book but he comes across even better on screen. Ryan Lee does a good job of playing stupid.

I’m not going to ruin the twists and turns of the story too much for those of you who’ve not read the book or are yet to watch the movie, but upon finding the Goosebumps manuscripts, each one with its own padlock and key, the terrible twosome discover that by unlocking the padlock, you unlock the monster from within the pages of the book. You can imagine how the story pans out. 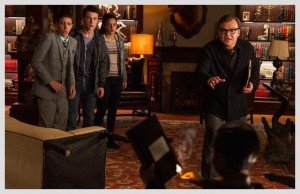 Now, I’m a fan of Jack Black, and was thrilled to hear that he was playing R.L.Stine who in the movie is the father and one of the lead characters. I read that Black met up with Stine to find out what sort of person he was and unfortunately Stine was a bit too ‘normal’ so they had to make him a bit quirkier for the role in the movie. Black was superb. I loved him – he was exactly how I wanted the author to come across – creepy, loveable and witty.

There are references to Stephen King throughout the film that made me laugh. I’m guessing that there isn’t any animosity between the two but it added a few chuckle-to-yourself moments. For example I loved that the school were putting on a performance of The Shining and R.L.Stine sits on the set with a typewriter to write the ending to his own horror novel.

I have to say that the cleverest and my most favourable part of the film was towards the end. R.L.Stine gets a job at Madison High School as an English teacher. He is walking along with Zach and a man quickly comes into shot, walking past. The two men exchange greetings, ‘Stine,’ the mystery man says. ‘Black,’ Stine replies. There is a purposely drawn out exchange between R.L.Stine (Jack Black) and Zach. ‘Who was that?’ Zach asks, ‘oh, he’s the new drama teacher.’ Stine replies. There’s silence on screen for a moment and then it hit me.

That was R.L.Stine’s cameo in the movie! WOW! I was impressed at the quirkiness and clever short intro of his character for if Jack Black is playing R.L.Stine in the movie and is the new English teacher, then why not have R.L.Stine play Jack Black as the schools new drama teacher? Nice work.

Anyway, back to the movie. Simply put, I loved it. I felt like a kid again. It surpassed all of my expectations which I must say doesn’t happen often. I think that movie goers need to remember that it is a kids film, that it’s fun and goofey but also filled with a few twists and turns that will make you jump along the way. Will it give you goosebumps? Probably not if you’re over the age of ten but, if you’re like me and grew up reading these books, you’re bound to love it.