*** Warning!  This review of Hereditary contains some minor spoilers! ***

Someone once told me that I should take films more literally, and not try to find meaning in every scene. But for me, that would mean taking the whole horror genre for granted. 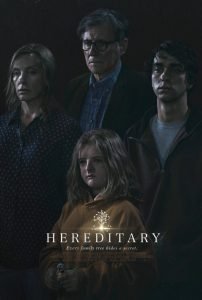 That would mean Rosemary’s Baby is simply about a pregnant woman whose husband made a pact with a satanic cult, that American Psycho is about a very narcissistic man, and that Romero’s zombie films are just about… zombies.

Hereditary is not an exception to this. If I were to consider that Hereditary is solely about a “long lived cult” would be ignoring half of the film.

Ari Aster’s debut feature film is causing a lot of conversation and, before it premiered, it was pitched as the scariest horror film of the year — some even going as far to pronounce it to be the ‘new’ The Exorcist.

And now… it is getting very mixed reviews. I would be very careful to say that Hereditary is a truly scary film — for me it was probably more ‘disturbing’ that actually ‘scary’. Yes, there were some moments, but what made me uncomfortable during the film was the atmosphere, the dialogue and the cinematography.

The photography mirrors the miniature houses that are built during the film – it relies on medium shots that last a bit longer than necessary, and are perhaps not as perfectly stylised as those that you might see in a Wes Anderson film. They are centralised, but there is something off… a sprinkle of German expressionism that makes us feel unease.

The shots are claustrophobic and they make the characters – and us – face their emotions with nowhere to hide. Of course, because it is a horror film, it relies on dim lighting, but it stays clear of jump scares – it is just not that type of film. Many would consider Hereditary a slow film, it is not trying to make us jump and then laugh because of the relief. It is trying to make our hairs stand up and our heart beat faster – throughout the whole 130 minutes!

I was completely shocked by the character’s actions and how they interacted with each other – I could see a deeply hurt and broken family, with each individual trying to hold on to anything to keep their heads above water.

The film starts with the death of grandmother Ellen, and her family getting ready to go to her funeral. Here, daughter Annie (Tony Collete) delivers a speech (one of many during the film) where she acknowledges that her mother was a very secretive woman and had many “secret cults” (a phrase that will hover throughout the whole film).

She continues to divulge that it felt ‘like a crime’ to be ‘exposing’ her, when she kept so many secrets her whole life. But Annie doesn’t talk about this as if it were a cute thing her mum did. She clearly feels resentment, and what hurts her the most is not the fact that her mother is dead, but that she seemingly isn’t able to feel sad enough.

The whole family seems to be coping well with the bereavement, except for her younger daughter, Charlie (Milly Shapiro), who is clearly shaken. Charlie didn’t just lose a grandparent, she lost a parent – as Annie recollects, Charlie was her mum’s favourite and she treated her as such, always caring for her to an extreme degree, especially when we learn that Ellen insisted on breast feeding Charlie instead of letting Annie do it.

Charlie’s main concern is a valid one of a 13-year-old who just lost their guardian. “Who is going to take care of me?” she asks Annie, completely ignoring the fact that her nuclear family is still intact.

As the film unfolds, we learn that Charlie was not only Ellen’s favourite, but that she suffered with the high expectations thrust upon her. Charlie has to manage the fact that her grandmother, the one who loved her the most, wanted her to be a boy, thus she hides her body and face behind a giant orange jumper and a messy hair. She eats compulsively and she builds male figures from tins and parts of dead pigeons. 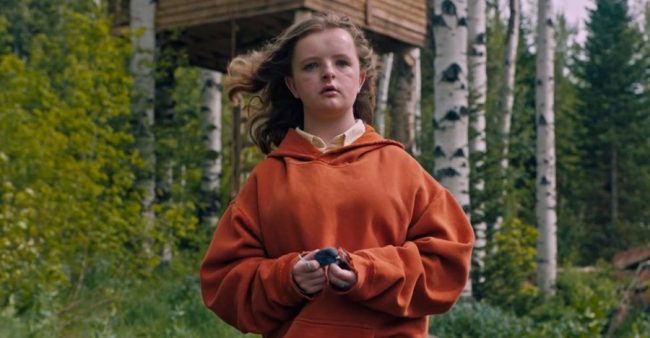 Charlie learnt from a very young age that while she is loved, she would have been even more loved if she was a boy. And thus, we see that Ellen’s hooks have been firmly embedded into Charlie from infancy, leaving her to deal with the fact that she is ‘inadequate’.

Ellen is dead, but it’s clear that her influence on the family is still there. Annie is a miniaturist artist, and the models she builds mirror her life. In a lot of them there is a figure of her mother just hovering in the corners, and looking through doorframes. She is not gone. Her influence is hereditary, her beliefs are hereditary and her diseases are hereditary.

This film reminded me of The Babadook and Rosemary’s Baby with the issues surrounding mental health, and the mother and child relationship is heavily explored. Annie defies the rule that a mother should love their children regardless of anything – she admits that she didn’t want to have older son Peter (Alex Wolff), and that she tried as much as she could to have an abortion.

Needless to say that Peter finds it hard to make peace with this – he knows his mum doesn’t love him as much as she should. And even though she says she does, her actions prove it to be a lie. Just like Charlie, he has learnt that he is inadequate, and feels unwelcome. That is more than enough to mess with someone’s head. Peter is haunted by a spirit that used to occupy Charlie, and now is trying to pierce its way into him. Once Charlie is out of the picture, it is his chance to fill the family’s void, and it is his chance to feel loved. 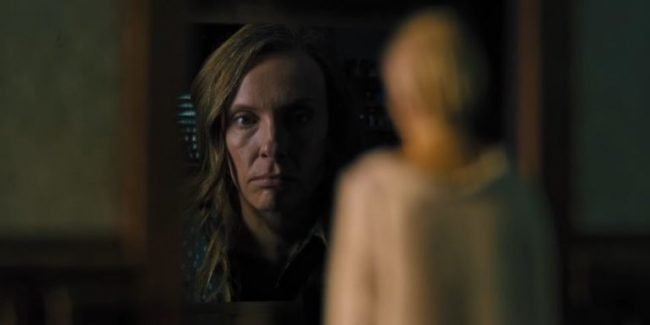 I think the issues of mental health are not being explored enough in reviews of Hereditary, There are many motifs around “head” and “losing one’s head” in this film – literally and not. Peter dreams that someone is pulling his head off… he bangs his head on his desk during class – he is on the verge of losing it.

Peter has to deal with a great deal of grief and guilt, almost being crippled by it – he doesn’t want to face his parents because he knows the pain he has caused, and cannot face it himself due to its horrific nature. When he comes home after class, it’s already dark, and he parks his bike in front of the house and stands in front of the door, gathering courage to go inside.

This film is a Greek tragedy and it proves that you cannot choose your family, and you have to roll with the hand you are dealt with. Hereditary is a film that takes suffering seriously without making it all beautiful in the end… sometimes things don’t end well.

This films strips the audience of all hope, and not because it’s sad, but because it is brutally honest. The dialogue between mother and son in this film is horrific in the sense that it is real, and the emotions the characters are going through are valid and relatable – and its somewhat open ending makes you question “what now?”

Aster’s feature is a marvellous piece that was made with real honesty, and this is seen in every shot. The horror tropes and conventions are well explored in the film, and the story we see is just the tip of the iceberg – Hereditary is packed with much more!