Strike while the iron is hot is an adage that can be applied liberally to Rob Savage’s brilliantly creepy British film, Host. 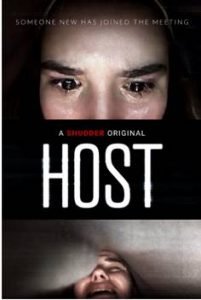 Filmed entirely in lockdown over several months and pieced together as a Zoom conference call, Rob and his talented team have stitched together a seamless thrill ride of a movie that wastes no time in setting the stakes and capitalising on its nightmarish premise.

Host cleverly takes a new piece of technology that has become commonplace in our pandemic affected lives and uses its familiarity against the viewer.

Most of us will have been in one of these video group-chats over the past few months, either to keep in touch with isolating loved ones or just to catch up with a mate; but I guarantee that a shiver will run up your spine the next time you have to switch on the camera after watching this film.

We join six friends as they look to stave off the mundanity of social distancing by hosting a virtual séance across a Zoom meeting. Haley (Haley Bishop), Jemma (Jemma Moore), Emma (Emma Louise Web), Radina (Radina Drandova), Caroline (Caroline Ward) and Teddy (Edward Linard) form our party and are all very well cast, bouncing off of each other believably and convincing as a close knit group who have been separated only by the pandemic.

The gang mostly are taking part to have fun, with one or two of the group refusing to take it seriously as they are guided through the ritual by twee spiritualist Seylan (Seylan Baxter), her soft Scottish lilt reassuring the group that everything is fine until inevitably it isn’t….

The film has a similar lay-out to 2014’s Unfriended, but is elevated above the slicker Hollywood production by being a little rougher around the edges and by performances that are believable and memorable. In this regard, the film has more in common with classic’s like The Blair Witch Project and REC, both of which hinge on the audience building an understanding and rapport with the cast.

Co-written by Gemma Hurley, Jed Shepherd, and Rob Savage, the screenplay does this with a brevity and wit that runs throughout the film. The subtle moment that leads to the arrival of an unwanted presence in the seance is a brilliant bit of narrative slight of hand that pays off well with some spine-tinglingly good scares.

The film clocks in at a remarkably tight fifty-six minutes and, after allowing us ten minutes to get to know our amiable group, the movie embarks upon a rocketing descent into other-worldly horrors, taking full advantage of the format to deliver some incredibly unnerving and juddering frights.

As a home release on the Shudder service, the film does not have to fit the traditional constraints on horror movies past, which would no doubt demand that the film was dragged out to at least 90 minutes; as it stands its punchy runtime in undoubtedly one of its strengths with the final 30 minutes almost breathlessly running through set piece after set piece.

The practical effects are remarkable for a film put together so quickly; from some subtle moments that will make you question if you really saw anything at all, to scenes of screaming horror in the frantic and intense final stretch that look all the more realistic for being viewed through the lens of a Zoom meeting.

The film takes full advantage of some of the technical aspects of Zoom meetings too, with annoyingly ‘clever’ meeting backgrounds taking a sinister turn while chaos reigns around our group, as all the while the audience watch the meeting timer run down ominously towards zero in the top corner…

Host is a film that actually benefits from being viewed on the small screen; the intimacy of the Zoom meeting plays well at home with the audience’s eyes scanning the landscapes behind the group, as darkened doorways and inexplicable noises converge to create an air of suspicion and fear in every tiny window.

I can imagine watching Host on a laptop in the dead of night could possibly provide a heart-stopping experience for many.

As a snapshot of the current day and age, Host will be a fascinating horror film to revisit in a couple of years. The taught script and well executed scares will no doubt hold up well as time passes, but I wonder if it will lose something without the immediacy and relatability of the current pandemic.

Regardless of any potential legacy issues, Host is a brilliant way for any horror fan to spend an hour of their time. Delivering scares both familiar and original, Rob Savage has served up a nasty quarantine delight that should be watched while the spectre of COVID-19 still stalks the land.