Film Review: In The Earth

There has been a lot of conversation over the past 18 months about the ongoing viability of the cinema experience in a post-COVID world. A model of home-theatre release alongside a cinema debut has been used by many studios to varying success, but the impact of the pandemic on the industry has been nigh on apocalyptic. And so, it is with a smile on my face and a song in my heart that Ben Wheatley’s latest film, In The Earth, arrived in UK cinemas last week to remind us all of the visceral power of the big screen. 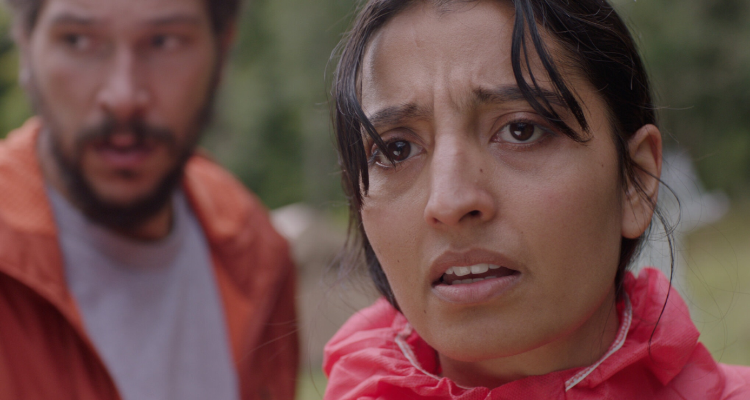 Set in a vast, secluded area of English woodlands, In The Earth follows scientist Martin (Joel Fry) and Park Ranger Alma (Ellora Torchia) as they travel to a distant scientific research station. Their world has been ravaged by a COVID-like virus, and while the disease shares symptoms with its real-world counterpart, this strain’s lethality has been dialled up to eleven.

Attacked by an unseen assailant on the night of their second day’s travel, Martin and Alma stumble injured through the imposing and ancient forest when they run into Zach (Reece Shearsmith), a squatter living in the forest to avoid the deadly virus that stalks the land. Offering to help, Zach leads the duo to his shelter to tend to their injuries and provide a night of respite from the forest; but as darkness falls and the spectre of forest deity Parnag Fegg looms large, is everything really as it appears?

In The Earth is a magnificent entry in to Ben Wheatley’s run of rural-horror films that have pocketed his back catalogue. At times it feels like a companion piece to 2013’s A Field In England, featuring similarly trippy and psychedelic sequences and another unhinged performance from Reece Shearsmith. 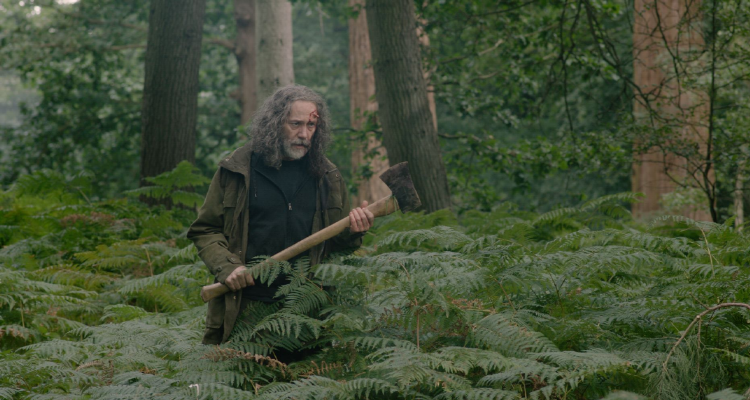 Conceived, written, and filmed during lockdown, it is hard not to feel the influence of COVID on the film. Martin has been in quarantine for four months and spends the first quarter of the film struggling to adjust to simply being outdoors; one of the characters we meet hasn’t spoken to another human for months, her self-imposed isolation mirroring the situation many in our society have faced in the last year and a half. The first act of the film feels uncomfortably real, so much so that it is almost a relief when the descent into horror begins in its second.

A film with so few characters hinges on the performances of its limited cast, and all rise to the challenge. Shearsmith taps into that rich vein of danger and menace that often lurks behind some of the characters he plays on Inside No. 9, and as he told Mick Garris on his excellent podcast, this film really gives him the opportunity to unleash his inner Jack Torrance. Joel Fry, usually found in comedies playing affable if slightly buffoonish characters, is terrific as a scientist who finds himself completely out of his depth and understanding. For a film as dark and scary as In The Earth, it is remarkable that Fry somehow still manages to mine a few laughs out of some truly grim sequences.

Ellora Torchia as no nonsense park ranger Alma provides us with the closest thing to a traditional hero as this film gets. Brave, determined, and loyal, Alma’s initial annoyance at Martin’s slightly wimpy demeanour is washed away as they are bonded through hardship and terror. The third act of the film introduces us to Haley Squire’s wide-eyed Olivia, the scientist working deep in the forest that Martin has been desperately trying to reach. From the moment she arrives on screen, Squires gives a buggy performance that is immediately unnerving and just ever so slightly off from the get go.

But the film’s true main character is the forest itself. Although a cliché at times to describe the setting as a character, rarely has a film so amazingly brought nature to terrifying life. There is a real embrace of the beauty of nature, and of its raw power and untapped potential of the natural world.

The lush, seemingly unending greenery literally comes alive in the film’s final third; Olivia’s experiments have seen her open communications with the spirit of the forest, Parnag Fegg, with massive speakers planted around the trees blaring out alien tones at painful decibels. And although she has found some success with the scientific method, there are older, darker ways at play in this dance with nature. 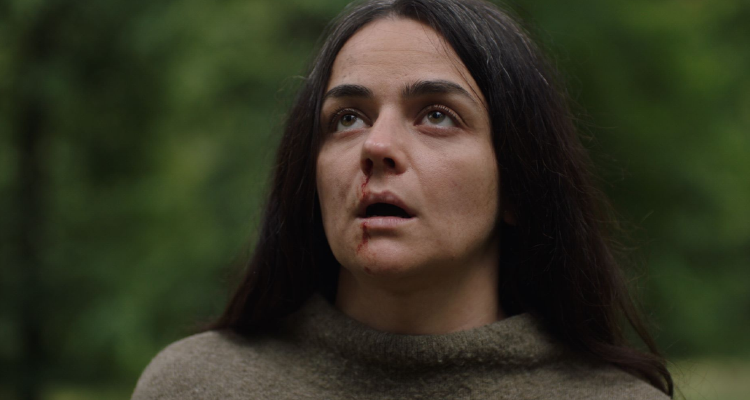 While the crux of the film’s horror relies on the unknowable nature of the evil, there are some moments of truly horrifying gore that Ben Wheatley excels in. Anyone who has seen Kill List will be familiar with that film’s ‘hammer scene’, In The Earth provides its own squirmy and visceral horror set-pieces where laughs of shock are just as likely as gasps of horror.

The soundscape of the film creates an otherworldly experience; as the screen splashes with psychedelic images and strobe lights pound like a beating heart, the audience’s senses are overwhelmed by a barrage of ethereal tones and synths that tear the notion of reality asunder. Often blurring the lines between diegetic sounds and the soundtrack itself, it creates a truly disorientating and uncomfortable experience for the audience. Truly, if there has been a modern horror film that demands to be seen on the biggest screen imaginable, it is this.

In The Earth is a film that will spark debate after its final moments. Wheatley does not appear interested in giving the audience any easy answers, and while the ambiguity of the film’s closing moments may frustrate some, it is to be applauded that he presents an ending that is open to personal interpretation.

Another winning entry in the folk-horror sub-genre of horror whose numbers have swollen in the last twenty years, In The Earth is a film that will shock, engage and, like 1999’s The Blair Witch Project, might ultimately ruin camping for a new generation.

If you go down to the woods today, you’re in for a pretty big surprise…

In The Earth is in UK Cinemas now.