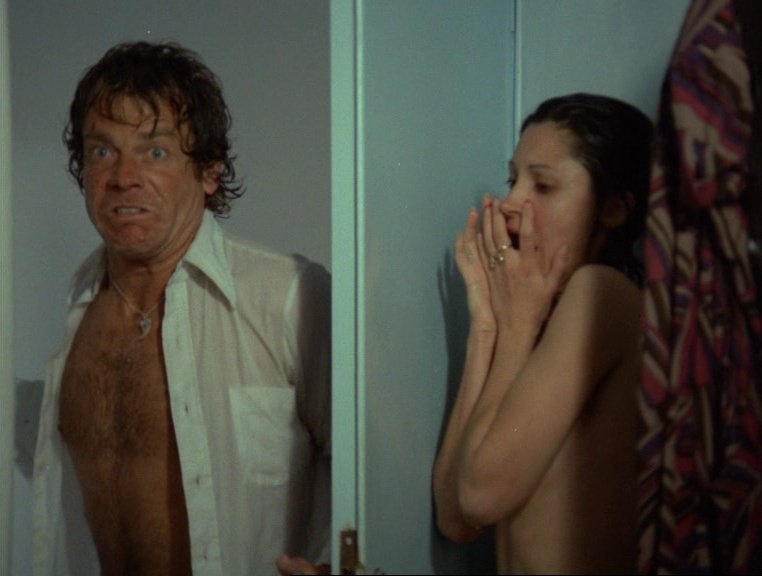 Well where do I start with Island of Death, or Devils in Mykonos or A Craving for Lust (named for when all of the violence was censored from the film leaving only the soft core sex scenes) to give it one of its original titles. This 1976 exploitation shocker is truly a nasty piece of work that is worthy of the ‘video nasty’ moniker and still manages to shock in an age where movies such as A Serbian Film are the norm. I don’t know why but I always enjoy this film no matter how many times I watch it, I guess I just really enjoy being shocked and appalled, but don’t we all!? Before the film is said and done we will see scenes of bestiality, decapitations, crucifixions on an actual church ground, man on woman rape, man on man rape, forced fellatio on a gun barrel and I have probably missed other shocking scenes off.

The film opens with a flash-forward to our main character Christopher reflecting on his bad luck and begging for help whilst looking up at the burning sun. We are then shown the loved up couple Christopher and Celia traveling by boat to the island of Mykonos, once they have arranged shelter they then go out to explore the island where they decide to have a bit of ‘afternoon delight’ in a phone box while Christopher is on the phone to his shocked mother. The craziness does not end and is ramped up no end, Christopher, who seems to be very religious, goes on to punish those who he feels are perverted and wicked all the while the acts he carries out are far worse. Christopher knocks people off with great glee and is very theatrical with his killings as if he is making a grand statement. Throughout their stay on the island Celia has a recurring dream of a crazed man who wants to harm the pair, while on the run from the police Christopher and Celia will encounter the man and the movie will come full circle at the climax. 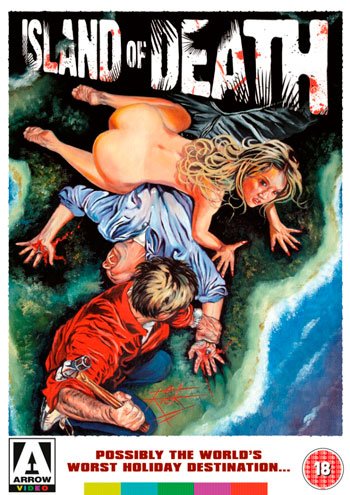 The acting in the film can be a bit choppy as in any exploitation film but Robert Behling is very believable in his role as the voyeuristic, judgmental and vengeful Michael, he also acted out some of the most amazingly shocking sexual scenes featuring water sports, rape, incest and bestiality. In the role of Celia, former model Jane Lyle is commendable as the innocent looking young girl being led down a murderous path by her lover, this was her first acting role and it does show in some of the dialogue heavy scenes, she would move back in to modeling after only completing three feature films.

Upon its original cinematic release Island of Death was greeted with an X certificate with extensive cuts being sanctioned by the British Board of Film Censorship, it was released on home video uncut as there was no governing body in control of what entered the home cassette players of the British public at the time. When the video nasty scare went in to full effect this title was one of the 39 titles successfully prosecuted and would disappear from British shelves until 2002.

Arrow video would obtain the distribution rights from director Niko Mastorakis, who upon being made aware of bootleg copies of the movie being sold for big bucks made the title available for distribution. Arrow released a pretty stacked DVD in 2010 which came complete with an audio commentary with director Niko Mastorakis and the always entertaining and knowledgeable Calum Waddell, a live Q&A and interview with Mastorakis, feature on the music of the film and the cuddly toy of all DVD releases, a trailer. The set came with, as all Arrow releases do, a reversible sleeve and also a fold out poster of the cover art and collectors booklet written by Calum Waddell. 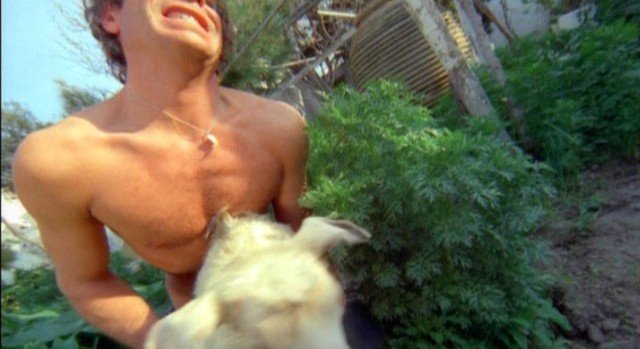 In June 2015 Arrow treated the picture to a 2K restoration using the original camera negative and the movie benefits for it, the Greek island scenery looks amazing and the overall picture is very sharp. The Blu-ray also boasts a new documentary with film historian Stephen Thrower, a feature on director Niko Mastorakis returning to the shooting locations, a four-part documentary on the career of Mastorakis and trailers. It is definitely worth upgrading to the Blu-ray but it is also worth hanging on to your original DVD, as a lot of the special features on the DVD were not carried over.

Seeing Island of Death in glorious HD is like seeing it for the first time again and Arrow have done a fantastic job of upgrading the picture and audio. Overall this is an extremely shocking film and 100% politically incorrect, I could never imagine this video nasty receiving a glossy Hollywood remake but then again I never thought Last House on the Left would either.