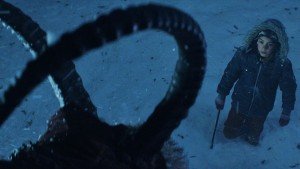 Despite the relatively high amount of comedy horror films that have achieved cult status over the years, it’s a tricky balance to get right; too scary, and you risk alienating the non-horror buff crowd, or play it too much for laughs, and risk losing the authenticity of the genre. While there are a handful of scenes in Michael Dougherty’s (Trick ‘r’ Treat, X Men 2) festive film that provide some genuine scares and belly laughs, as a whole it suffers from not quite knowing what it wants to be, while wasting the comic talents of Toni Collette and Adam Scott – an unforgivable offence.

First though, it’s worth saying that it’s not easy to see Krampus at your local cinema. Although it smashed box office targets in the US (making $16m in its opening weekend compared to its $10m prediction), here in the UK, it’s either showing once a day (and usually at the latest time slot) or not at all. A shame, because while it’s far from the Gremlins-esque festive creature feature it wishes to emulate, it’s definitely worth a watch.

Krampus opens with a scene we’ve seen way too many times in Christmas movies – shoppers storming into a toy store, fighting one another and generally behaving in a very un-Christian, not-very-festive-spirited-thank-you-very-much type way. Cut to the Engles’ family Christmas, and it’s not much better – young Max’s aspiring middle class parents squirm as their huntin’ shootin’ fishin’ relatives turn up with their ungainly offspring in tow. 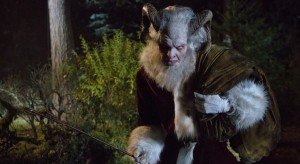 But there’s nothing quite like a marauding horde of devil goblins, re-animated gingerbread men and a demonic anti-Santa (to quote father Dougal McGuire) to get a family working together again, and it’s not long before the dads (Adam Scott and David Koechner) have tooled up in a Bruce Campbell style to protect their families from the evil presence hell-bent on pulling their family apart. A beautifully crafted animated segment in the middle of the film adds to authenticity of Krampus’ Austrian folklore roots, while a hilarious slow motion sequence involving the gingerbread men provides the best scene in the film, however it never quite reaches the dizzying heights of cult film status.