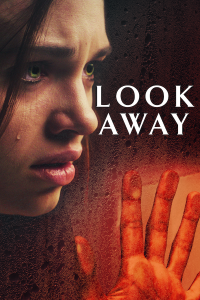 And if you add in a snowy, isolated landscape? Let the Right One In.

How about if you substitute vampires for a murderous reflection? Well, you get Look Away.

Look Away has the prom and the snow, but whilst the premise is engaging – a disaffected only child, Maria (India Eisley) to superficial parents is seduced by her sinister mirror image, Airam – it ultimately underwhelms.

It’s a familiar story so we should be shown something we haven’t seen before.

The problem with Look Away is that it doesn’t offer anything new and suffers from a lack of build-up and tension.

The first mention of the prom feels too close to the actual event so there’s no chance for tension to build, making you squirm at the prospect of the humiliation you know is coming.

The largely irrelevant bully is set up as a major player in the plot but is dealt with in underwhelming fashion just when you’re convinced it’s about to get brutal.

The strange thing is that for all the lack of tension in Look Away it takes a long time for the story to come to life.

(Got me, got me questioning) Where is the blood?

The catalyst for Maria’s/Airam’s revenge is the humiliation suffered at the prom and there’s a definite Carrie feel to this sequence; I half expected a bucket of blood to drench Maria.

And while the incident is believable, it isn’t harrowing.

When Maria’s sinister reflection starts to exact revenge, you’d be forgiven for thinking it will follow along the lines of Carrie White carving a path through her high school prom.

But this is a revenge of a different sort. In fact, it doesn’t really feel like revenge because it lacks the necessary bloodletting.

Horror doesn’t have to be gory to be effective, but it needs to be able to bare teeth and Maria/Airam don’t have the required fangs.

Maria’s tormentors are thumbnail sketches and for the most part their comeuppances are tame.

Look Away is shot well and the use of white is interesting, but there aren’t enough bursts of colour to break it up.

All the pristine snow and sterile décor of the house are begging for gouts of blood to corrupt the perfection – Look Away is frustratingly bloodless.

The one moment of vengeance that comes close to being taut, and bloody is on the frozen lake.

What starts off as a baffling ice-skate-off descends into a chase sequence full of exciting, kinetic camera work and the tension.

A rare sight of blood comes in the intriguing sequence in which Amy (Mira Sorvino) hallucinates blood flowing in reverse up her legs while her husband (Jason Isaacs) slices his cheek – a striking moment which isn’t followed through.

There are plenty of interesting concepts in Look Away, but what is the film about:

Revenge on the teenage bullies?

Maria’s relationship with her mother?

Look Away tries to be all of these, but no strands are given enough breathing space.

Are there any positives?

Yes. Isaacs is creepy and controlling as the superficial plastic surgeon father, and Eisley does her best with Maria/Airam.

The look of the film is interesting, and the final image is engaging.

However, it’s overly long and needs more conviction – this could’ve been a tight and unsettling film. As it is, Look Away is disappointing.

Look Away is available on digital download from 15 April.