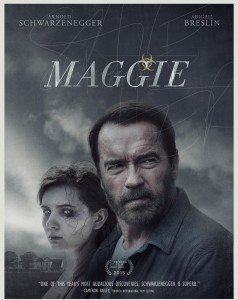 Zombies have dominated the media scene for quite some time. For military video games including zombie levels, to actual parody zombie movies, we’ve run the gamut of what this genre seems to be able to spew out.

Don’t believe me? Well, depending on when & where you read this, you can go watch Zoombies, zombified zoo animals, or Zombeavers, zombie beavers, on Netflix. You don’t need to be a scientist at Umbrella Corp. to realize that the walking undead seem to be getting played a little bit too much, especially for the more jaded horror fan.

But, what if I told you I had a zombie film that had action, intrigue, mystery, even a dash of romance… but wasn’t officially a true horror movie?

Well, you’d probably — and perhaps rightly so — ask me why it’s featured on this site, and I’d defend myself with the fact that not many people know about the deliciously suspenseful piece known as Maggie.

This film is certainly an intriguing one. First, it stars Arnold Schwarzenegger in a dramatic role — which he actually nails — as a father of a college girl who’s been bitten during the recent zombie incursion.

It’s true, the zom-pocalypse came, humankind won, and this movie is essentially just the clean-up. There are still zombies wandering around, and people infected through bites can last days or weeks before turning. Unless turned over to a family member, the infected remain in quarantine, where the disease is monitored. It is also implied that they are used as guinea pigs for testing.

Not fun for someone facing down the barrel of impending death and subsequent reanimation.

Maggie was made in New Orleans, Louisiana, and was set to air at the Toronto Film Festival in 2014, but Lionsgate stepped in and purchased the rights to the film before a second be shown. The film eventually debuted at the Tribeca Film Festival in 2015, where it received mixed reviews and general interest. Interest enough though for a limited theatrical release (very limited in the UK!) before being released through video-on-demand.

Schwarzenegger delivers the perfect protective father figure in the film as he doesn’t have to cast aspersions of someone who shies away from violence. To emphasize this, he dispatches some zombies throughout the film, though he does plead with them to speak, to try and prove that they are actually still human and just sick.

He doesn’t use a gun either, as one would expect. No, he wields a simple wood cutters axe, even using it to batter a bullying police officer who tries to arrest his daughter and drag her to quarantine where she’ll be euthanized. 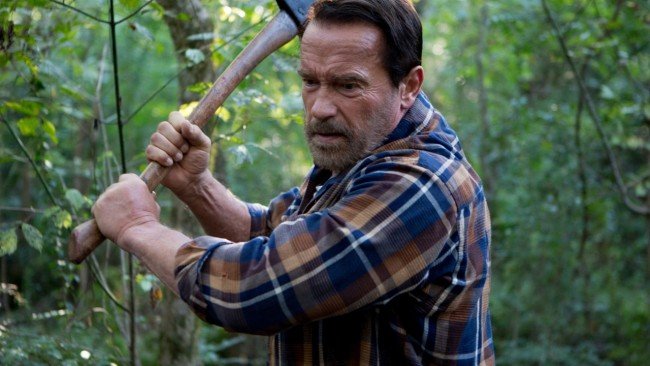 Now, this is something that is debated in the film. Maggie goes to a beach party early in her sickness and meets another infected boy, who claims that the quarantine is a lie. The official line is that victims are given comfort and rest, but he says they throw them all in one room, where the fully-fledged zombies consume the sick.

Later, the family doctor says that the Center for Disease Control uses a powerful drug for euthanasia, which can pierce the numbness that comes with the slow process of zombification and is rumored to be very painful.

Whichever is true, this paints a bleak future for Maggie, one that leaves several people telling Schwarzenegger to do the only thing he can do:

With indirect orders to kill his own daughter, he waits until she is truly dying and waits up with her, shotgun in hand. Sadly, he falls asleep and she turns in the middle of the night. However, instead of consuming him as a normal zombie would, she retains a shred of her humanity and gives him a kiss on the head and leaves the farm, shambling off into the darkness of the end credits. While some would claim this is too open-ended for the conclusion of a film, i feel that with this being a horror/drama, it in fact makes an excellent finale as we are left with several dreadful questions.

Some officers earlier in the movie justify Schwarzenegger’s use of lethal force on two zombies, saying that it had to be done. “What would have happened if they found someone else?” one officer asked. This leaves the thought of a newly-turned Maggie left to go on a miniature rampage, infecting and ruining the lives of one or two people and their families before being put down.

What if, since she waited it all the way through, she got to retain her consciousness? We saw another zombie in the film, a little girl, who was bitten and turned after a long infection at home. Someone she bit and infected was aggressive, but she merely stood and allowed herself to be killed, as if she understood that she needed to be removed from the world.

This leads to a whole different level of understanding for the zombie virus, as if it seemingly can leave people aware of who and what they are, does it mean they can control their base desires to harm — or consume — others?

This film is something the zombie genre needed: a serious, emotional film that really explored the other side of the coin — what people going through the ‘zombification’ process really must feel like.

Check it out for yourself, as it is more than worth it. I’ve already added it to my DVD collection.