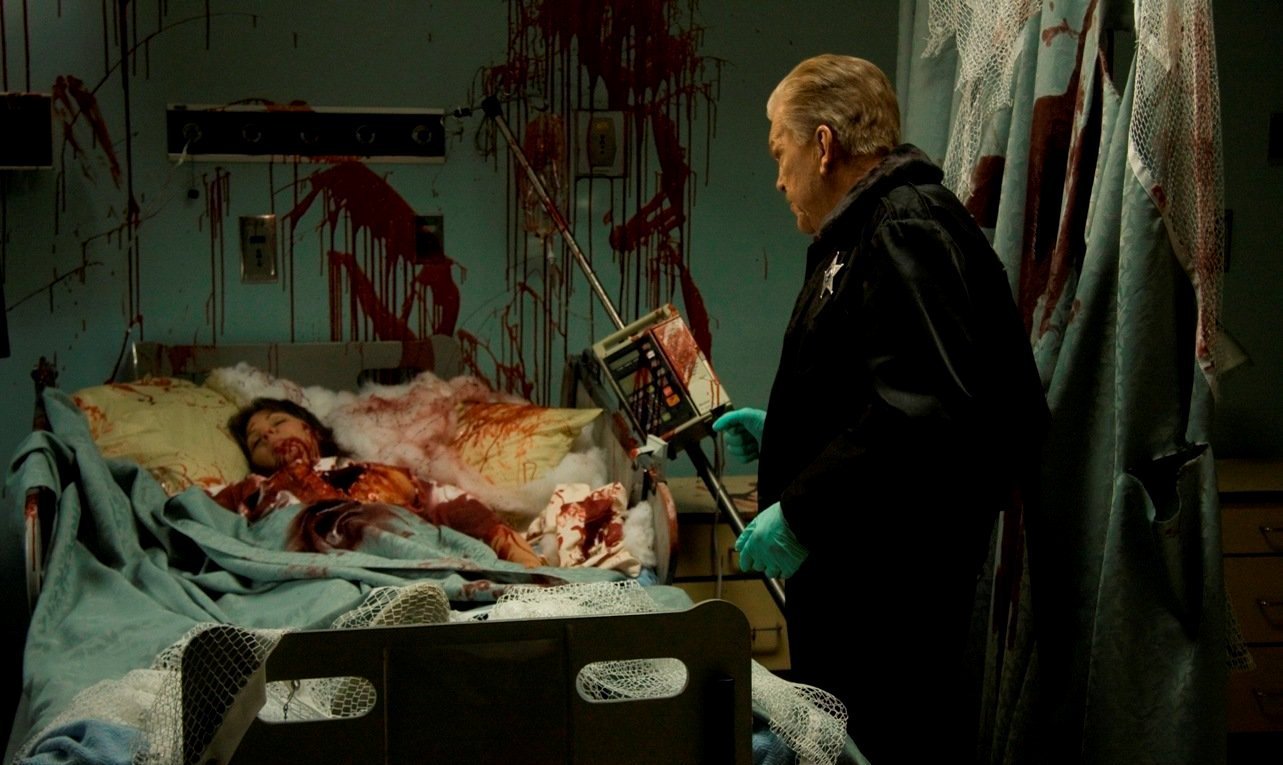 The film opens with a newsreel montage; newspaper snippets, TV segments, and moments of action all fill us in on the Valentines Day tragedy – several men trapped down a mine after an accident. We skip forward a year; Harry Warden (miner, murderer and coma victim) awakes a year to the day in his hospital room, flashbacks splashing before his eyes. A nurse walks into the room to check on him, going straight to the drip and ignoring the well-lit and empty bed next to it. We’re not even ten minutes in and already I am nearly yelling at the TV.

Once she realises the patient is missing does she sound an alarm and exit the room? No. She moves slowly and fearfully away from the door, and then slam – the MY BLOODY VALENTINE title fills the screen (an effect that was probably pretty cool in a 3D cinema, but loses something in grainy 2D TV mode), and we hear the least observant nurse in the world scream in the background. I hope she’s been killed. Malpractice lawsuits are what happen because of nurses like her.

Luckily she turns out to be the dumbest woman in the film, so don’t let this opening section make you roll your eyes too prematurely. This isn’t the most sophisticated film in the world – but there’s some stuff worth hanging on for.

So here’s a summary of the plot. Six miners are trapped underground after an explosion that is tracked back to Tom Hanniger (Jensen Ackles), son of the mine owner, failing to flush the lines. When the miners are reached by the rescue crews they discover only one left alive – Harry Warden. The others didn’t die because their air ran out – they’ve all been murdered by a pickaxe to the head. Harry Warden, the lone survivor, is obviously the main suspect, but he has fallen into a coma. 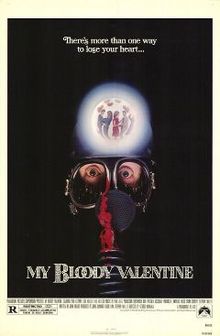 Harry wakes up exactly a year later, on Valentine’s day, and kills everyone he runs into except for Irene (Betsy Rue), Axel (Kerr Smith), Sarah (Jaime King) and Tom Hanniger. These four are your stereo-typical horror film teens at this point; a slut, a jock, a good girl and a quiet young man carrying a weighty emotional burden.

They’re all partying at the mine (yes – the same mine that Tom trapped six people in only a year ago; no wonder he’s doing some silent jaw clenching) until Harry turns up and attempts to replicate the bloodbath he left at the hospital. He kills everyone he finds apart from these four, and then the sheriff turns up and he and his deputies pepper the bad guy with bullets until he runs into the depths of the mine and disappears forever.

We cut to ten years later. Sarah has married Axel, now the town Sherriff, Irene is engaging in a shagfest at the motel, and Tom has returned home, popping anti-depressants and still not coping with the trauma of that night in the mines.

This film hits all sorts of ups and downs.

There is some entirely terrible acting and some really shoddy dialogue. A number of people have reaction times that make you bawl at the TV. There are some predictable plot points and clichés – I’m sure there’s an excellent drinking game to be had here for anyone who cares to sit through all two hours and four minutes of it. The 3D effects are annoying if you’re not watching it in 3D (and potentially if you are…) – nothing lifts you out of a bloody moment like the heightened photography of a weirdly lit pickaxe you know is supposed to be charging out of the screen, but, thanks to your lack of 3D TV and necessary eye-wear, is just looking a bit like it was drawn in later. Which it was. Those are the downs – unless they’re sort of things you enjoy.

The ups – the death count, the creative kills, and the bad guy. I LOVE the nutter in the gas mask; his glassy vacant eyes and his Darth Vader breathing. He wields his pick like a light sabre and is impervious to bullets. Like all great slasher villains he has a phantom ability to appear and disappear. He’s a rockin’ bad guy.

Once you’ve established that this film is your basic cheese-filled slasher it’s fine. We’re not in this for character development or story arcs. We’re in it for the blood, the surprise attacks and the inventive deaths. The animosity between Axel and Tom is pretty predictable. The lingering sense of unfulfilled love between Tom and Sarah is likewise, as is Axel’s infidelity. There is a Scooby Doo kind of mystery here – it’s “who is this masked man”? But I’m not sure I care. Solving this is not as intriguing as how the next person will get killed. Why does Gas Mask Man save Tom in the mines? Ah, who cares. Let’s get crazy with the pickaxe again.

With the slasher status comes the obligatory nudity, but it’s the sort that stops being sexy pretty quickly. It actually makes me wonder, just for a moment, if this film is some sort of pro-feminist tale in disguise. The women put up a stronger fight than any of the men, none of whom are the stuff of heroes. Irene wields her nudity like a weapon – it doesn’t make her vulnerable, it gives her power. This is pretty awesome. I would have liked to see the film be completely about Irene kicking arse and not giving a crap that she’s not had time to put her clothes back on. She is by far the most interesting character in the whole film. 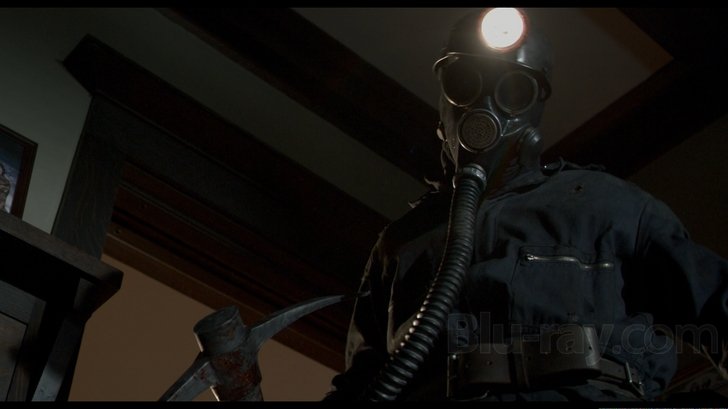 Meanwhile Sarah, the main female lead and the good-girl-turned-Mom , also gets to level out her incredibly slow running and bad decision making when it comes to doors, by being pretty gung-ho when it comes to self-defence. My favourite bit is when she launches herself out of the window of an old house to escape – there is no delicate stepping or hesitant skipping – she just chucks herself out, rolls down a roof and thuds to the ground. The ladies in this film are NOT ladylike when it comes to saving their own skins, and I love this about them.

The question of “who is that masked man” (the one going around butchering all those pesky kids) is eventually answered. As the film progresses you narrow it down to one of two people (although I did ponder for a moment whether we were going to head down a “Scream” two –hander) and, well… One of them turns out to be the bad guy. There are no spoilers here, folks.

All is as it should be at the end. Events lead the key players back to where everything started. Sarah’s acting suddenly gets a bit better. There’s a twist that you may or may not have seen coming, but either way is fairly satisfying, and an ending that has “or is it?” written all over it.

I am a cynical horror film fan. I’m that annoying person in the comedy club, folding her arms, setting her jaw, and saying to the comic “go on then. Make me laugh – if you can”. But My Bloody Valentine slowly won me over. It’s not pretentious. It’s not art. It’s not scary. But it delivers what I want from a slasher – prompting me to both laugh and groan every time another victim was added to Harry Warden’s increasingly long list of kills.

Charlie Boucher is the author of “Hiding the Smile” and “Zauberjackl”, a radio 4 play about witch hunts in Salzburg. Recently her short story “The Signets and The Seamstress” was featured in Timeless Tales magazine.