Liz wakes in a darkness punctuated by flashes of a red warning light. She is wrapped in a membranous shroud and, though she doesn’t yet realise it, is about to undergo an extremely stressful hour and a half. Liz has woken up inside a cryogenic unit with no memory of how she got there and a warning that her oxygen supply is dwindling fast. 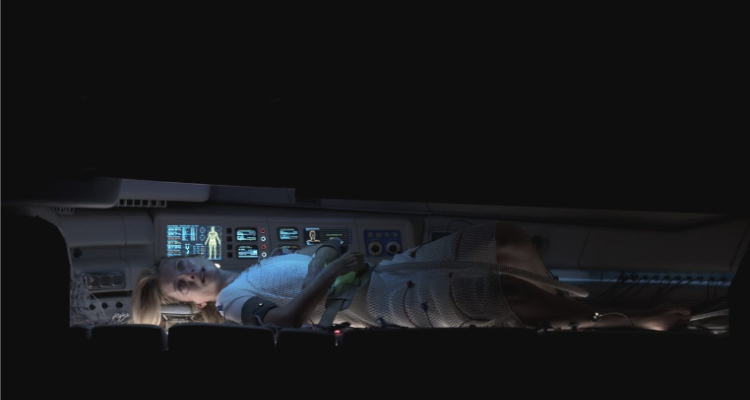 This is Oxygen, the latest from director Alexandre Aja.

The obvious comparison point to Oxygen is Buried, which saw Ryan Reynolds trapped underground—in a coffin rather than a cryogenic pod. Buried is an extremely tense film serving as a metaphor for the US in Iraq.

With flashes of memories showing people in face masks and talk of an unspecified virus, coupled with the depleting air supply in Liz’s pod, it is hard not to consider Oxygen as a film talking directly to the situation we’re currently living through. Even Liz’s position; isolated and scared, hooked up to an intravenous spider-web of tubes feels eerily understandable.

The other reference point I have for Oxygen is Locke, in which Tom Hardy drives, in real time, from Birmingham to London, making a series of phone calls along the way. This is because Liz manages to communicate with people outside the cryogenic unit thanks to her omnipresent company: MILO (think a medical version of HAL 9000 and the source of Oxygen’s glimmers of subtle, black comedy). I was also put in mind of Locke while watching Oxygen because, as well as being confined with one character in real time, there is a sense of journey (literal and less so) to both of these characters. 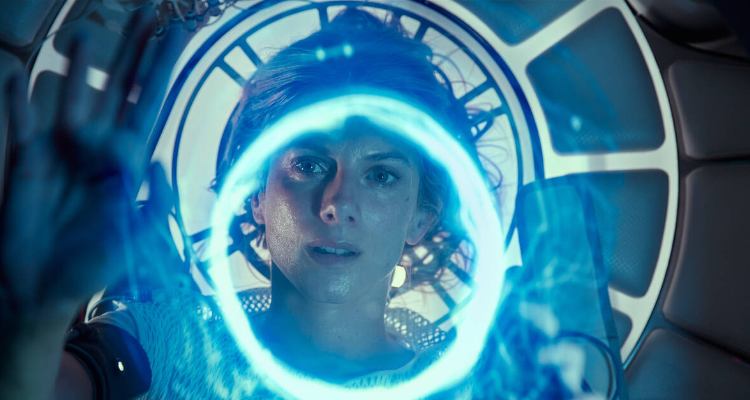 The world outside Liz’s pod is shown to us largely in the form of memories, flashes of interactions between other people, but the bulk of the film is with Liz, inside her cryogenic pod, Omicron 267. Due to this, Oxygen lives and dies on its central actor, Mélanie Laurent (Inglourious Basterds), and her performance is one of understated skill. Her performance is so good that when the film drifts from its tense core—which it unfortunately does in the second half—she keeps you involved and engaged.

It’s hard to imagine Liz being played by anyone else, but before Mélanie Laurent, Noomi Rapace was lined up and the script was in English—such a good actor, she changed the language of the film.

What Buried did brilliantly was to balance the metaphorical and human aspects of the story. Where I found myself drifting from Oxygen was when the weight of the concepts tried to drag you away from Liz. Her struggle to understand to survive is so beautifully performed that the high concepts feel unimportant.

The other aspect to Oxygen that kept me engaged was the cinematography. Maxime Alexandre’s involvement in the upcoming Resident Evil: Welcome to Raccoon City, gives me some hope for a franchise I’ve struggled to enjoy. The way the camera moves about the tight confines of the cryogenic pod is wonderful, the dizzying rotation between Liz and the audio-visualizer of the communication she is receiving heightens the sense of confusion we feel—and by we, I mean Liz and the viewer. You are in the pod with her—and for someone who is not overly keen on confined spaces, this feeling of being trapped gave Oxygen a very uncomfortable additional layer to the watching experience.

Putting you in the heart of the tension is something that Aja is extremely good at. Crawl—alligators in a basement—was a surprisingly effective and enjoyable example of this. Neither Oxygen or Crawl are perfect films, but they are both visceral and engaging (if a little uneven). They also highlight just how interesting Alexandre Aja is as a filmmaker. No two of his films are the same and cover schlocky B-movie territory (Piranha 3D) to high concept sci-fi thriller (Oxygen)…and his next film? Space Adventure Cobra apparently; a rogue space pirate teaming up with a bounty hunter in a search for treasure on Mars. 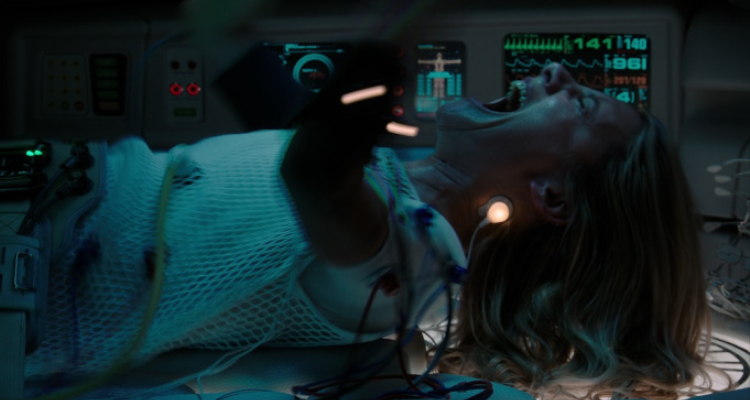 Oxygen, like all of Aja’s films, is a bit of a mixed bag; fantastic central performance, but it gets a little lost in the conceptual side of things. It’s unsure if it’s a film about memory, isolation, or other more spoiler-heavy ideas and ultimately it ends up not being enough of any of them—but it is an interesting watch and typically atypical of the rest of his filmography.

In an interview with Nightmarish Conjurings, Aja described Oxygen as a film about a lot of different things—this, I feel, is actual to the detriment of the film as a cohesive whole, but I think there’s there conceptually to warrant a second or third watch—even if it’s just to enjoy a masterclass from Mélanie Laurent.

Oxygen is streaming now on Netflix.