I’m very skeptical about rape-revenge films – to what extent are they empowering? Do we really need to watch long everlasting minutes of rape to realise women are strong and will take their revenge? 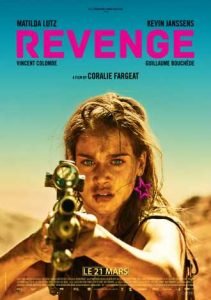 Personally I think that they should only be made if they are bringing something new to the table, because we should not be watching rape for the sake of it. Sometimes it feels that the sub-genre has grown popular for all the wrong reasons and therefore it is always curious to see what a woman filmmaker can do with the sub-genre.

Coralie Fargeat’s Revenge is one of the latest contributors to the sub-genre and stands alongside Abel Ferrara’s Ms. 45, the Soska Sister’s American Mary, and Paul Verhoeven’s Elle.

However, whilst Fargeat’s debut film is generally very good, has its clear merits and its share of social commentary, it also falls into some old/unnecessary tropes.

Because of its popularity, the sub-genre has been the subject of many studies. One of the most influential is probably Carol Clover’s chapter about rape-revenge films on her cornerstone book Men, Women and Chain Saws. She writes that even though the lines between feminist and non-feminist films are blurred, the core of the sub-genre is to portray the transformation of the character from victim to avenger illustrating the female self-sufficiency – mentally and physically.

In addition to Clover’s studies, many authors have written that the turning point for the empowerment of the female character is the rape itself – which is problematic. Do women need to be sexually assaulted to become strong? I don’t think so, and many films portray it differently. Revenge, unfortunately, falls into that category.

Jen (Matilda Lutz) starts the film as a Lolita archetype – wearing bright colours, pink earrings, lollipop in her mouth and having an affair with an older, married man. Jen is aware that Richard (Kevin Janssens) is married and this knowledge makes her a flawed three-dimensional character, which is positive and negative at the same time. Positive because we are all human and flawed, no one is perfect; and negative because, well, it is not the most ethical thing to do.

Moreover, Jen is very sexual and sensual and on one hand it is important that the character owns her own sexuality, but on the other hand the amount of close-ups we have of her behind is a little bit too much. Jen is powerless and completely alone, and that is what makes the rape scene so infuriating – the men take advantage of the fact that Jen has no way to protect herself.

One of the issues raised with the sub-genre is the violence during the assault itself. Take Meir Zarchi’s  I Spit on Your Grave for example — the rape scene is so long and so violent, and the same can be said about Gaspar Noé’s Irréversible.

Fargeat managed to dodge that bullet by having the camera pull back during the rape, focusing on the character’s isolation rather than the violence upon her. This is interesting not only because it shifts from what we are used to see, but also because it is off-brand for a French extremist film – which makes it even bolder that Fargeat decided shoot the film that way.

Moreover, during the revenge part of the film, Jen moves into a ‘femme castratrice’ role that focuses on castrating the men as the ultimate revenge, which again provides its own share of problems, but she focuses on pain itself.

In addition, although Jen is almost naked, her clothes have blended in with her skin colour and the blood and dirt mixed up turning into one colour, forming almost a uniform. Richard on the other hand, is naked during the “last battle”, shifting the gaze and the fetishism to his bloodied body.

Jen’s revenge is so long and violent that Fargeat equates her film to the French extremism as seen in Claire Denis’ Trouble Every Day, Alexandre Aja’s Haute Tension and Pascal Laugier’s Martyrs. There is no such thing as too much blood.

For me, a ‘good’ rape-revenge film swims in social commentary, and Revenge is no different. Kooyman once explained that rape-revenge films explore multiple binaries, such as city/country, civilised/uncivilised, men/women in order to explore the relationship between good and bad. In this film, the male characters are overflowing with male entitlement and that clearly paints them as bad/evil.

He also wrote that the film ‘must indulge [in] misogynistic and patriarchal impulses in order to combat them’. The film opens up with Jen and Richard arriving at a house in the desert – a paradise for a love affair and for murder – no one around for miles. Two of Richard’s friends interrupt their getaway as they arrive early for a hunting trip. It is a non-spoken understanding that everyone is aware that Richard is cheating on his wife and no one seems to care.

Jen’s attitudes (dancing, drinking, using drugs and playing around) and clothing are interpreted as an open invitation and Jen’s body is seen as fair game – everyone can have a piece of it. On the morning after, Richard leaves Jen with his two friends whilst he runs some errands and Stan (Vincent Colombe) makes a pass at Jen, but when she refuses he sees it as an affront against him. Stan does not take a “no” for an answer and rapes Jen, almost as a punishment for teasing him and turning him down.

Stan and Dimitri (Guillaume Bouchède) both see it as a normal thing to happen and they are not afraid of Richard’s reaction (maybe a little bit). When Jen tells Richard about it, he confronts his friend but it is almost as if nothing happened, whilst when Jen confronts Richard about it he gets violent towards her and calls her a “whore”. In this point, the film portrays rape as a common denominator for those men and it brings about a group mentality that appeals to the sense of camaraderie where rape is seen as “male sport”.

In the middle of the desert, Jen is left for dead with a birch piercing through her midsection. In a non-realistic way Jen manages to take the birch out and seeks revenge on her aggressors. Penetrated twice – first by the rape and second by the birch (phallic object, anyone?) – Jen crawls from the place she was left for dead and steps into the men’s territory.

They are hunters, this is their sport, and it becomes a cat and mouse game. The film oozes with social commentary by the fact that the men are portrayed as the epitome of male entitlement, especially over women’s bodies – they see Jen’s clothes and actions are an invitation, instead of it being her way to express herself, and the second she rejects them and demand respect, if not from Stan, from her lover, they turn violent against her.

They see Jen as an animal to be hunted and killed, and Jen by stepping into their territory seeks revenge without needing to lure them into a place where they feel weaker or in disadvantage. Revenge is almost a step forward from Katie Aselton’s Black Rock – not taking the merits from the latter.

She rises to the situation and embraces her fate as she goes forward without looking back – she doesn’t flinch when she needs to use a gun, she even looks confident and familiar with it. She has no time to plan her revenge, she takes whatever comes and rolls with it. It is gruesome, gory, and violent. It is French extremism at its best.

Whilst in the beginning of the film the desert landscape portrayed Jen’s loneliness, by the end it portrays the endless options for her to kill her perpetrators. Unaware of the force that is Jen, the three hunters find their comeuppance.