Last month, hundreds of us descended upon the UK’s largest festival of horror, FrightFest, eagerly anticipating some of the best horror of 2017. Upon seeing the line up, I wrote about the five films that I was most excited to see, and one of them was a low-budget piece from Preston DeFrancis called Ruin Me. 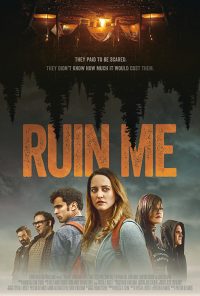 Ruin Me follows the story of six strangers who pay to take part in ‘Slasher Sleepout: The Ultimate Horror Movie Experience’, which combines camping, a haunted house and an escape room into one extreme 36-hour event.

Alexandra (Marcienne Dwyer) reluctantly accompanies her boyfriend, Nathan (Matt Dellapina), and has to find her “final girl” inner strength to make it out alive as the experience turns deadly.

After an intriguing beginning, the film gets straight to the point and has Alex and Nathan heading to the meeting point for their ‘slasher sleepout’. Upon arriving, the six strangers are stripped of their possessions, hooded and bundled into a van and dumped in the middle of the woods.

We soon get to know our characters and what they will bring to the table. There is a sexually adventurous goth couple who have been on these kind of experiences before, a mysterious stranger who has a quiet strength about him, a funny guy (Larry, who I absolutely loved!), and of course, our main protagonist and her boyfriend.

Upon exploring the area, they come across a series of puzzles that they have to complete in order to move on, eventually finding their campsite for the night. This is where the film really kicks off… I will stop there as I don’t to ruin the viewing pleasure for any of you. All I will say is that there are many twists and turns before we reach our conclusion!

Ruin Me lends itself to elements from films such as Shrooms and Saw, and certainly doesn’t take itself too seriously, using horror stereotypes, clichés and even copycat lines (“I’ll be right back”). I don’t see this as a bad thing because whatever you think is going to happen, most likely isn’t.

I think overall, this is the main reason why I enjoyed Ruin Me so much. I went in with all sorts of expectations and predictions and they were all blown to hell. It twists in on itself and you end up double guessing everything you thought you knew about the characters and the plot.

There are elements that aren’t super strong, such as some of the performances aren’t totally on point, the special effects could be considered a little weak and, personally, I thought the cast was “bumped off” a little too quickly.

But in honesty, I’m probably nit-picking. I had an absolute riot watching Ruin Me and will definitely be watching it again, as well as introducing it to my fellow horror friends that are yet to see it.

Ruin Me has been publicised brilliantly, and is currently making its way round the horror festival circuits, having been officially selected for FrightFest, Screamfest, Women in Horror Film Festival and Grimmfest amongst others. The best advice I can give you is to give this little gem a watch while you have the chance. It may just become your new favourite.