For the internet-savvy, and to horror fans, Slender Man is a character we’ve all grown to love over the last few years.

Either be it in the form of narrative fiction on Creepypasta or the standalone video games that bring a suspenseful chill to the spine, this entity has the makings of an all new horror icon. 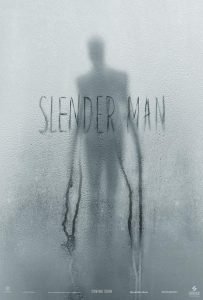 He has even been the cause of a crime in America where two teenage girls took a friend into the woods for a ritual sacrifice to either join or to see their “dark master”.

This, of course, created a moral panic that led many to believe that he was a symbol of the growing violent thoughts in the youth of the world.

First conceived in 2009 during a photoshop contest on the forum “Something Awful,” Slender Man ballooned into a mythos that brought him across time and space, granting him mystic powers and foul motives that were never truly revealed in any stories told.

Part evil-natured spirit, part specter, Slender Man the film was given the green light in May 2016; the release was met with a nervous audience.

Nervous in that he is unknown to the general bulk of society, who don’t follow internet ghost stories. The fact that the family of the surviving victim of the attacks gave the film some bad press didn’t help, which led to some of the grittier images being taken out.

Some of the trailers show one of the main characters killing themselves with scissors, whilst another gives a far more disjointed view that led to a jump scare.

The hesitance of this film, in my honest opinion, is what led to it having such a poor receiving. The transition led the movie into continuity issues, unexplained actions, and a weaker plot.

The film follows Hallie Knudsen (Julia Goldani Telles) and her friends as they spend an alcohol-filled night chatting and joking in one of their basements. It leads to the summoning of Slender Man, as one of the girls states their male friends are doing the same. 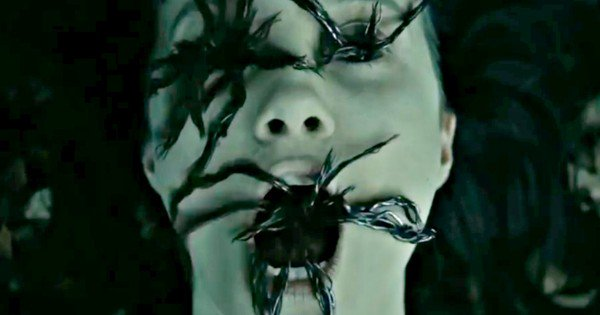 The summoning is easy enough: you watch an internet video and listen for three gongs of a bell. When you open your eyes, a series of images flash through the video until a lone tree is shown. All girls sit transfixed, until nervous laughter overtakes them. Hallie even goes so far as to state that only the boys would be afraid of such a strange video.

The next week is spent with the Slender Man hunting them down using psychological terror, hallucinations, and oddly potent tree powers.

When one of the friends, Katie Jensen, (Annalise Basso) goes missing after a field trip, the other girls begin having nightmares while seeing a slender figure standing in the woods.

They hear the missing girl’s voice, run into the woods, and are assaulted by the entity as it emerges from trees and shadows. Dark tentacles of shade allow the antagonist to move like a spider or to bind victims into silence.

Without issuing too many spoilers, Hallie begins seeing bleeding eyes, the standard ghost faces seen in many horror films, and has waking nightmares.

During a teenage make-out session, a hallucination ruins the mood by eliciting screams of fear and, after going to check on one of her friends, she pulls her in from the window ledge to prevent her from killing herself. 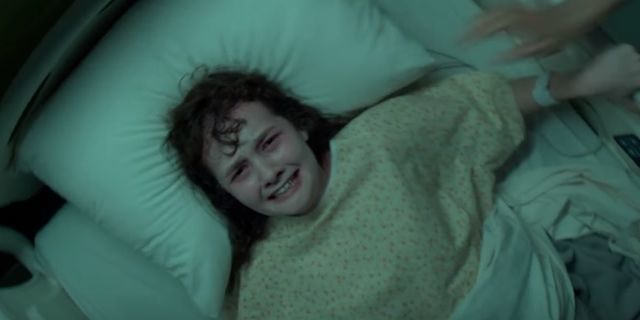 Animating and emerging from trees, shadow play, mind altering powers, and the ability to video chat with an intangible, invisible phone is a laundry list of abilities this creature exhibits throughout the film, truly showing that fear can’t be defeated.

If you have the chance to watch this film, don’t pass it up. It’s not the next big thing, but it is original enough that you can enjoy the fruits of the film studio’s labour.

I plan on buying the film when it comes to Blu-Ray and would urge you to do the same. It’s a perfect film to watch with friends, so that you can all have a good shriek and laugh together.