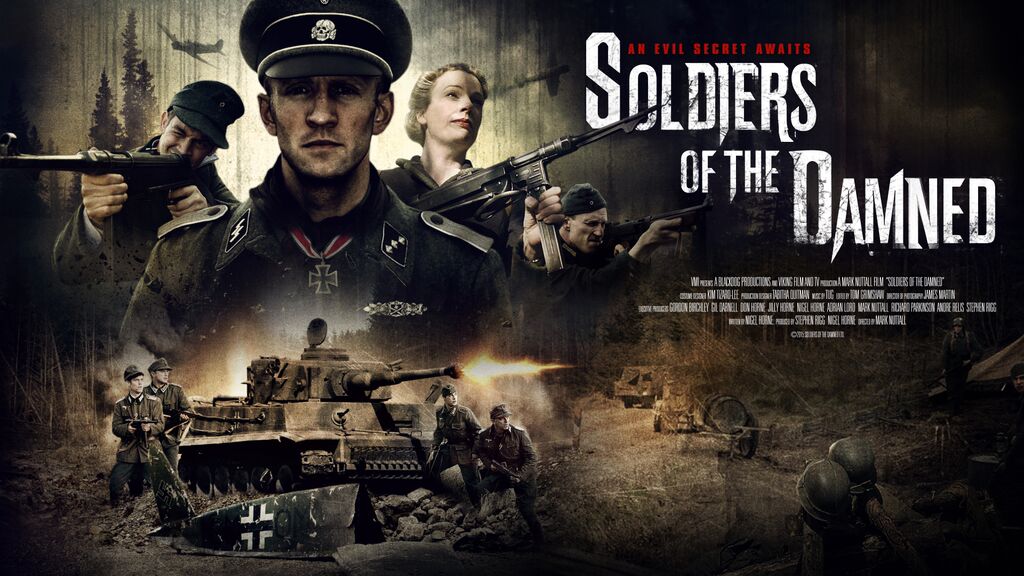 The Second World War was one of the most horrifying and unimaginable events that happened in history; so much so, you could almost say it was what real-life horror films are made of. So, why are there not enough horror films that use soldiers and army atrocities to create a unique yet realistic dread in us? Director Mark Nuttall and writer Nigel Horne clearly picked up on this unexploited horror and along with higher beings, the paranormal and a little bit of time warping created the unique Soldiers of the Damned.

It’s 1944 and a group of German soldiers are sent on an obscure, dangerous and completely undisclosed assignment. Commander of the troops, Major Kurt Fleischer, and his men are to escort Professor Anna Kappel into the ominous forests of Russia to retrieve a precious and ancient relic. When the troops begin to vanish into thin air it becomes apparent that their mission is something far more sinister and the woods are home to worse than the brutal enemy.

There’s something very compelling about war stories and that becomes even more so when you add a slow burning atmosphere that explodes with a creative idea and lots of blood. Soldiers of the Damned progresses slowly at first but takes the time to build the characters and their relationships up, which is important when there’s the mystery of what the mission really is, who is on what side, who knows what and most vitally what is causing men to disappear and return mutilated.

Gil Darnell (Major Kurt Fleischer) plays the commander exceptionally well, bringing to life his worn down personality from the war and his distrust towards most. Not only this but Darnell looks like George Clooney and sounds exactly like Ross Kemp – awesome! Alongside is Miriam Cooke (Professor Anna Kapell) who brought to life the perfect balance between being sweet to deceive the troops and then turning into an absolute insane bitch.

Soldiers of the Damned was bound to have a high number of deaths due to it being the war and all, but there was just the right combination of harsh but typical shooting kills with an unrestrained amount of gruesome and inventive ones by whatever lurks. The effects were done incredibly well, although my only qualm would be that I thought the tank scene could have been a little subtler. Regardless of that, I loved watching the Germans painfully combust and have bullets unconventionally put in their brains.

Nothing will be revealed about the twist of this film because I genuinely want you to see it for yourself. The plot turned unexpectedly catching me off guard with what really dwelled in the forest – it’s fresh and something I’ve never seen used before. This British indie film is perfect if you’re looking for something a little different and love both the horror and war genres. Soldiers of the Damned is truly a clever, distinctive, bloody and enthralling film, which I highly recommend.