Written and directed by Zoe Lister-Jones, The Craft: Legacy is Blumhouse’s latest film – a sequel of 1996’s The Craft directed by Andrew Fleming.

Fleming’s film is a fan-favourite that has endured cult following throughout the years and, of course, messing with films with such a strong fandom is always tricky business. 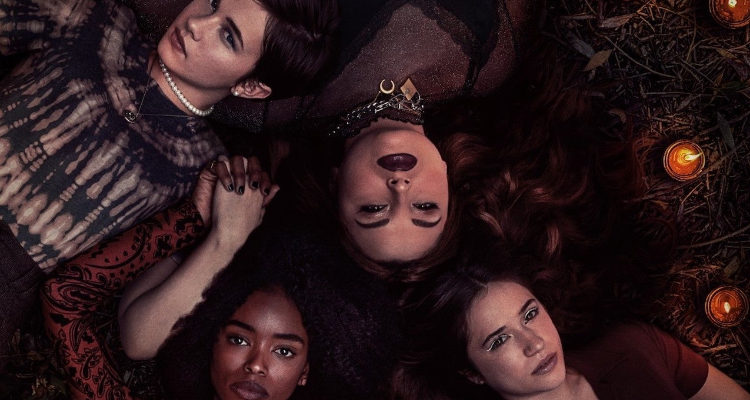 We saw this last year with Blumhouse’s Black Christmas (directed by Sophia Takal) where the new take on the 1974 slasher got nothing but hate from people on the internet and critics alike (if you look further into Google you will see a few positive things about it).

Both Blumhouse films have a few things in common: they are both working with beloved material – both Black Christmas (dir: Bob Clark, w: Roy Moore, 1974) and The Craft (dir: Fleming, w: Fleming and Peter Filardi, 1996) nurture cult status within horror community; they both talk about the struggle of young women; they were directed and written by women, and they have a predominantly female cast.

The 1974 Black Christmas, made in the wake of Roe v. Wade in the United States (though the film is Canadian), tells the story of a group of girls who are harassed and killed by a psycho-sexually disturbed killer.

The girls fight not only the killer, but society’s ideas of themselves. The house mother of the sorority is an alcoholic who laughs at the face of conservatism. Barb, a sister from the house, makes fun of the incompetence of the police. Jesse, another sister of the sorority, fights her boyfriend for the right to have an abortion and live her own life as she pleases. Very feminist, as you might notice. 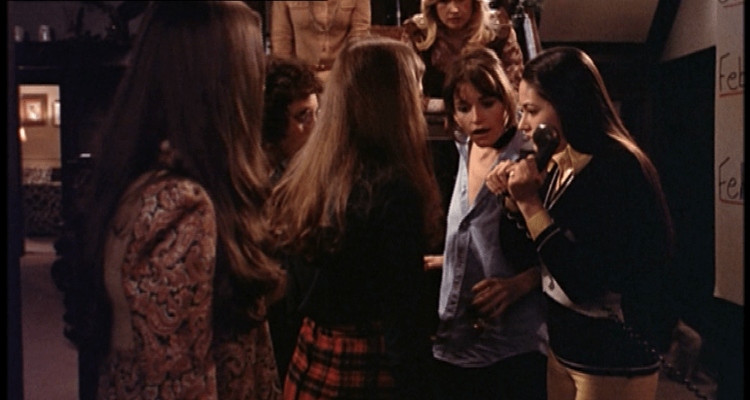 Same goes with Fleming’s The Craft. It depicts a group of misfits who happen to be witches and use witchcraft for their own gain. It sees their rise from underdogs to powerful witches. Again, another feminist film.

In summary, both films are undoubtedly championing female agency. Of course, they are not exempt from faults as, spoiler alert, almost all the girls die in Black Christmas (1974) and the ‘Final Girl’ Jesse, even though she survives the killers assault, is likely to die as the film suggests she is alone in the house with the killer. The Craft, despite giving power to the young witches, punishes them, especially Nancy, for misusing it. Therefore, although it allows female agency, it does so only to a certain point. Not to mention that the female friendships are also riddled with competition over boys. Nevertheless, these films do represent third-dimensional characters that are flawed but are also allowed to thrive.

Now, let us turn to The Craft: Legacy. Although, technically, Lister-Jones’s film is a sequel of the original, it does not present itself as such – at least not in the first hour and a half. Much like the 1996 film, Legacy depicts a group of underdogs that get together to form a coven and find within themselves and the group their immense powers.

Lily and her mother, Helen, move in with Adam, Helen’s new boyfriend. Adam has three sons, Abe, Jacob and Isaiah, and they are very much what you would expect of ‘typical teenage boys’. It would be an understatement to say that Lily is completely out of her environment.

In school, she is bullied, as on her first day she gets her period and is unprepared for it (again, an understatement). Lourdes, Frankie and Tabby ‘rescue’ Lily from the toilet by giving her a clean pair of shorts and from then on the four witches form their coven. 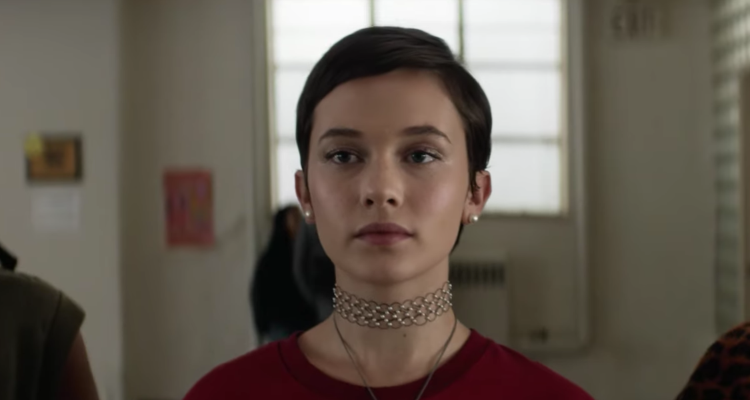 Much like the original film, the witches here use their power for their own personal gain – they ‘punish’ the bullies, but their biggest and boldest move is to turn Timmy, the school bully and the most misogynist character into a ‘woke’ and politically correct young man.

The 2020 film doesn’t hold back on its representation – there is a coming out scene that explores the struggle men face with coming to terms with being bisexual and the difficulty of ‘being in the middle’ when society’s binarism forces people to choose only one. Lourdes, one of the witches, is transsexual (and is played by trans Latina actress Zoey Luna) and Tabby, another witch from the coven, is black.

All three of these characters speak openly about their ‘defining features’, but these ‘defining features’ are not actually defining them – they are much more than just a ‘trans character’, a ‘black character’ or a ‘bi character’. Interesting to note here that Rachel True’s character Rochelle in the first film was one of the only black female protagonists in a horror film and her character’s impact in the genre is immense.

So far, Legacy seems to actually be following in the footsteps of the original, in terms of representation and female empowerment, but much more explicitly, as one would expect from the post #metoo era. Moreover, in terms of narrative, Legacy seems to correct the wrongs of the first one. Here, differently from the original, female friendship is not torn by a love interest, the young women do not fight because of the guy, but because of the break of trust, and finally, it does not tame female power as the first one does.

Similar to 2019’s Black Christmas, Legacy is getting some heat online. Some are saying its ‘Snapchat aesthetic’/ ‘gen z aesthetic’ makes it less of a horror film worth of good criticism. Both Black Christmas and Legacy take fan-favourites and reimagine them in the post-#metoo era, a time where racism, sexism, homo/transphobia are being shut down. 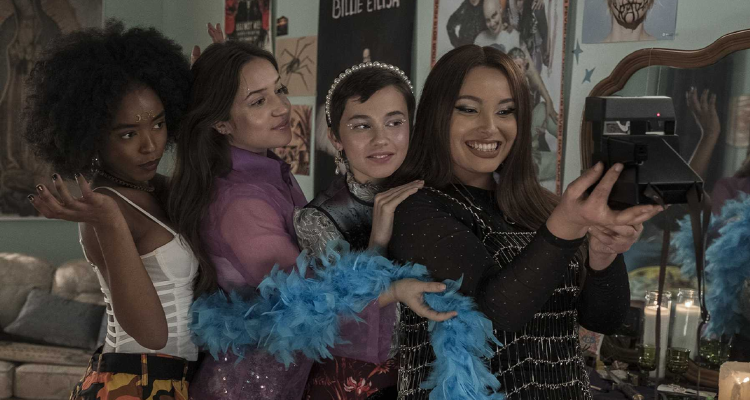 Both films talk about female struggles, and they are not very subtle. Well, actually, they are not subtle at all. Both films feature the men/patriarchy as the evil to be killed. This is often what criticism and online hate are targeting. However, these internet trolls or ‘guardians of authentic horror’ (I am being sarcastic here) keep forgetting what the original films were all about. Even more importantly, what many horror films are about.

Halloween 1978/2018 is about female empowerment, female agency, and trauma that is passed down through generations; Carrie, Ginger Snaps, Jennifer’s Body and Raw are about young girls’ coming-of-age struggles that arise with the arrival of their periods or puberty; I Spit on our Grave, The Last House on the Left, Hard Candy, Savage Streets, Revenge, and Teeth are all about women fighting their own rapists (or their family fighting for them).

All of the slasher films that have arisen since Halloween (or Black Christmas for that matter) have given us something much more important than the iconic serial killers like Michael Myers, Freddy Krueger or Jason Vorhees. They have given us the Final Girls.

In summary, what I am trying to say is… films directed by women have been met with such criticism for ‘waving the feminist’ flag or for being ‘woke’ (as if this was a female concept… I mean, films from Night of the Living Dead to Get Out that focus on race struggles, and are predominantly made by men, are very much woke films, but we don’t see people shutting them down because they bear social commentary…) that people often forget horror history and the tropes that have made the films of today to be what they are.

Again, to reiterate, I am not saying these films are perfect and are the scariest horror films ever made, but I am trying to raise awareness to what these films actually mean and how they represent the growth of the genre playing with old tropes and creating new forms of representation for audiences.

Having said that, as I mentioned before Lister-Jones’ The Craft: Legacy is an interesting sequel that adapts the issues raised in the 1996 original and responsibly carries its legacy.