The Ward is a title you may not have heard before. But don’t let the title fool you – this is no generic horror by any stretch of the imagination.  It’s set in a psychiatric hospital in 1966 where a young woman — Kristen —  was admitted for burning down an abandoned farmhouse. We soon find that she is being terrorized by a ghost, and we follow her fight for survival and escape attempts. 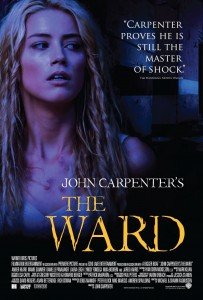 For fans of Shutter Island, I’d definitely recommend this film.  Although I think Scorsese definitely did the better job, I actually found The Ward to be a little more frightening and satisfied my need for psychological horror.

One of my favourite things about this film is the atmosphere. I found myself feeling quite uncomfortable for the duration, and never got to experience that feeling of ‘relief’. This was both a gift and a curse. I thought it made for a pretty heavy-going experience, but also kept it interesting.

I admit I went into this film expecting the worst after reading the title, but was pleasantly surprised by a lot of this film.  Even the twist at the end was great!  The Ward doesn’t have such a good rating on other websites, but I feel this is largely due to the fact that Shutter Island came out the same year.

The Ward does rely quite a lot on jump scares, even with the constantly eerie atmosphere, which many film critics don’t seem to enjoy, although I didn’t expect anything less after looking at the DVD case and reading the description and so this didn’t ruin the experience for me.

Generally, I really like jumpy paranormal films, so perhaps my opinion is biased, but nevertheless I thought this one was pretty decent! But again, wouldn’t really recommend it if jump scares and the like aren’t your thing.  I think the strongest part of this film is definitely the plot twist, so if you enjoy a good cerebral rollercoaster that ties up all of the loose ends and leaves you satisfied, then it’s definitely worth viewing!