If you enjoy gothic horror, then you’ll have been eagerly anticipating the release of Netflix’s new horror, Things Heard and Seen. 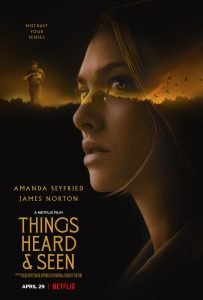 We open on a man driving up to a bleak farmhouse to find blood dripping into his garage and his daughter ominously playing alone. We then move swiftly into a dark classroom with bright and vivid artistic landscapes projecting one after the other onto the wall. We can already sense something awful has occurred.

It’s a great start to Things Heard and Seen, written and directed by Shari Springer Berman and Robert Pulcini, further encapsulated by the gothic font of the opening credits.

We learn that the man is George Claire (James Norton) who uproots his wife, Catherine (Amanda Seyfried) and his daughter from bustling New York to remote Hudson Valley to take up a new role as an Arts Professor.

Here we quickly settle into the uneasiness of a house and town that harbours secrets from its newest residents.

We quickly decipher that the marriage is not a bed of roses with Catherine’s contention that George no longer paints; George’s inability to keep his eyes, mind, and other appendages from wandering; Catherine’s eating disorder; and George’s scepticism of his wife’s concerns about their new home.

Catherine goes from a thriving life to an isolated existence in their new property, where several things are going bump in the night. There are some creepy moments to enjoy as a horror fan as ethereal wisps of light pass along the walls, lights flicker, and chairs rock on their own. Tip: Keep an on the shadows… 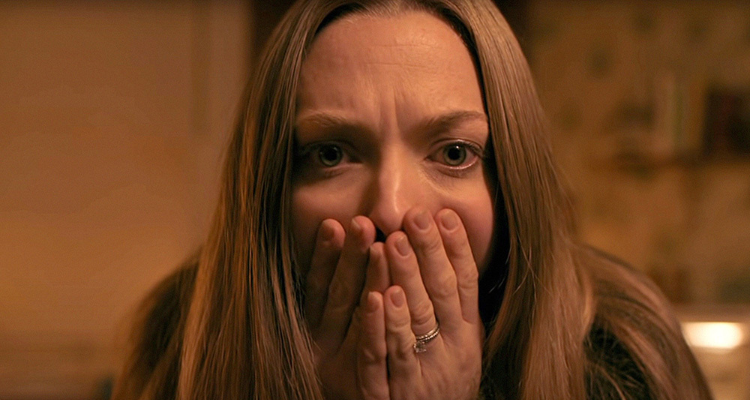 Luckily, Catherine finds solace in like-minded residents who are keen to hold a séance in her house. George’s head of department, Floyd (the wonderful F. Murray Abraham) is particularly attuned and shares Catherine’s concern that this spirit achieves peace.

There’s a backstory to the house and, following class horror tropes, Catherine uncovers creepy artifacts that just happen to have been left behind, including a ring and a family record of deaths.

But I find the dissolving marriage rather than ghosts a more gripping element of the story. George’s mistreatment of his wife, displayed in his adultery, pathological lies, gaslighting, and betrayal only serves to draw strong women into his lonely wife’s life, including the no-nonsense, Justine (Rhea Seehorn).

The first half of Things Heard and Seen is strong, although some plot points are set up so matter-of-fact that it’s a little bit of paint-by-numbers scriptwriting. The film ultimately loses me halfway as it starts to spiral into mayhem where all loose ends are tied up in escalating violent ways.

The end is very poetic and can be taken in several ways, which is a saving grace for a film that feels like it’s ultimately lost its way at this point. Things Heard and Seen is based on Elizabeth Brundage’s novel, All Things Cease to Appear and I’m keen to read her story to provide more insight into this relationship drama/ghost story. 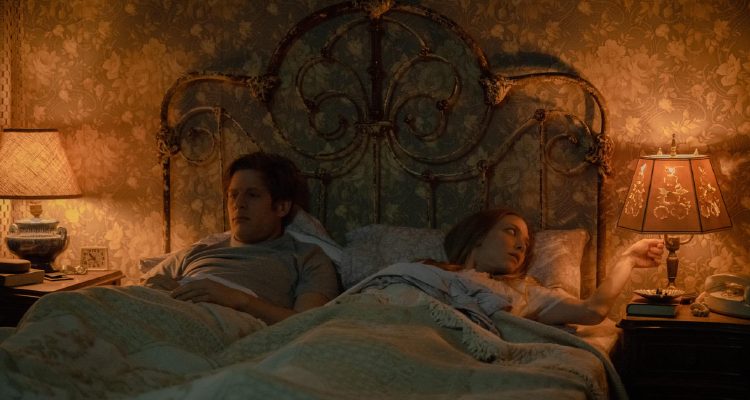 I love what Things Heard and Seen says about the strength of women and the bonds created when we unite, but the message could be stronger. And it’s easy to despise George as his character fits every predatory male stereotype. He’s just truly, truly awful. And not just to women.

Berman has suggested that this film was made to watch a second time… but I don’t think that’s advice I’ll be taking.

Things Heard and Seen is now available to watch on Netflix.