I am a huge fan of the horror anthology; from Amicus classic’s like Tales from the Crypt (1972) and Dr Terror’s House of Horrors (1965) to more modern fare like Trick ‘r’ Treat and Ghost Stories, I love the balls to the wall energy that filmmakers seem to show when crafting their own entry in the film. Few modern takes on the genre have hooked me quite as much as the first two V/H/S films (V/H/S Viral was….. challenging), attracting talented filmmakers like Adam Wingard, Ti West and Timo Tjahjanto and letting them loose on our eyeballs. 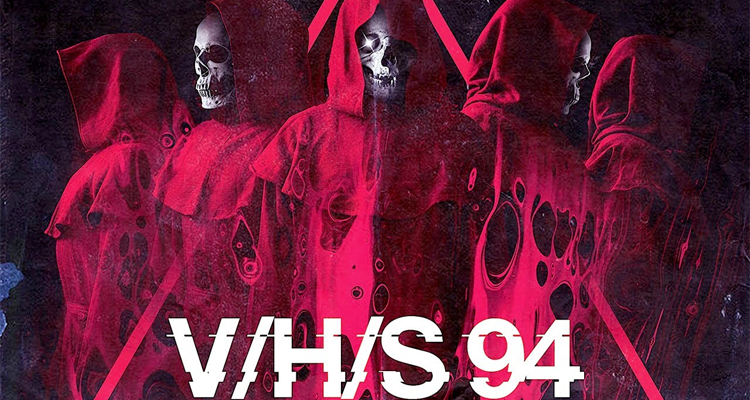 And loose eyeballs are very much a relevant thing in V/H/S/94.

Four uniquely different shorts are presented to the viewer through the lens of a slightly clunky wrap-around story. A SWAT team are called to take down what they believe to be a drug factory, only arriving to find dozens of mutilated bodies strapped to chairs watching all manner of horrible and gruesome tales. Making their way through a maze of screens and blood, video cassettes leaking gloopy, viscus fluid ooze all around them desperate to have their tales seen. And we the viewer are treated to four of the best.

All of the stories in V/H/S/94 are made to look very much ‘of the time’, with news reports looking dated and achingly 90’s and some of the home-made fare looking suitably degraded in quality. The sketchy, flickering recreation of the video cassette ‘look’ really adds to the mood and feel of the film with each segment looking suitably aged and warped.

And I do mean warped.

We open with Chloe Okuno’s ‘Storm Drain’, a fun little story about sightings of a mysterious Rat-Man living in the sewers beneath the city. We follow perky news anchor Holly Marciano (Anna Hopkins) and her camera man as they make the questionable decision to follow their noses into the depths of the city. While featuring some gnarly creature effects and some over-the-top grizzly horror, ‘Storm Drain’ feels like the weakest entry of the film, but even so is still packed with an enormous amount of fun. The segment’s final coda features an incredibly funny punchline to the piece while serving up one of the film’s goriest death scenes, leaving the viewer with an image not soon forgotten. 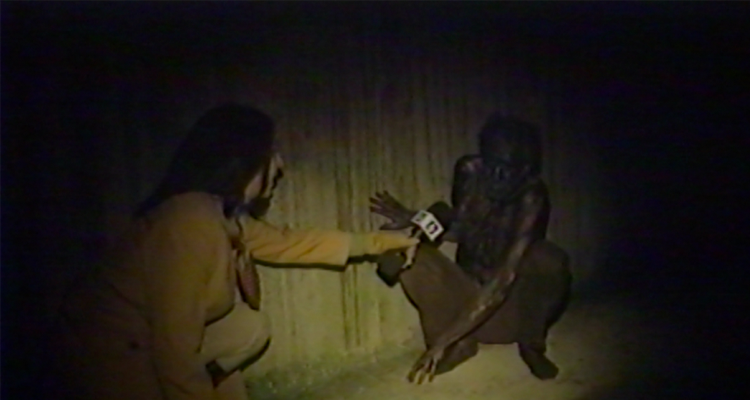 Next up is Simon Barrett’s slow burning piece ‘The Empty Wake’. In the middle of storm season, new employee Hailey (Kyal Legend) is tasked with hosting a wake by her manager at the funeral home. Having died under gruesome and mysterious circumstances, the wake of Andrew Edwards passes off with few visitors and little fanfare. Only when the lights of the funeral home give out at the height of a monumental thunderstorm, the banging noise that Hailey is trying to ignore coming from the casket begins to pound with a manic insistence…

‘The Empty Wake’ is filled with an ominous, creeping dread that practically drips off the frame. Filmed using three separate cameras (the reason for filming the wake is flimsily hand waved away in the story’s opening moments), the jumps from viewpoint to viewpoint allows for some neat creeps and constant shadow watching. The tension ratchets up to eleven as the nature of Hailey’s predicament is slowly revealed, before a shocking climax leaves us with a haunting and memorable final frame. 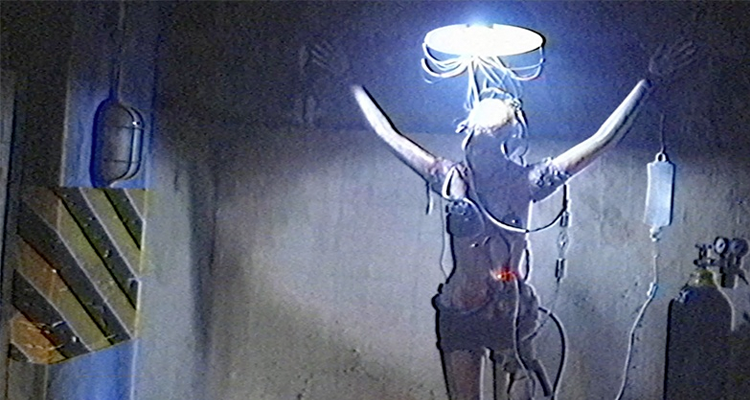 Timo Tjahjanto already holds the record for most bonkers entry in the V/H/S cannon with the sublimely ridiculous ‘Safe Haven’ from V/H/S 2, and in ‘The Subject’ he seems to be going all out to top his previous work.

We follow the stomach-churning experiments of a mad scientist (known only as The Creator) as he dementedly tries to fuse machine with flesh, creating an array of disgusting, unsettling horrors filled with an oddly sympathetic humanity. When a crazed SWAT team arrive to destroy the doctor and his work, a bloody reckoning is unleashed that practically paints the screen red. Filmed mostly from the point of view of one of The Creator’s victims (a poor girl whose head has been all but been replaced by whirling servos and cameras), what plays out is a non-stop gore ride through hell and back.

Featuring a mix of gleefully played practical and visual effects, Tjahjanto creates a segment that wears its influences on it sleeve and plays out like an homage to manga standards of old and even cyberpunk classic Tetsuo: The Iron Man. The segment draws to a close with a deliriously well observed first person shooter scene, as the unhinged lawmen are dispatched in dramatic, gruesome style. Packing so much into such a short time leaves the piece feeling frantic and exhausting (in the best way imaginable) and Tjahjanto is to be commended on creating something so wilfully and purposefully insane.

The final segment, ‘Terror’, is a clever satire on the lunatic fringe of American nationalism. Following the exploits of a redneck-militia who have come into the possession of a truly unique weapon of mass destruction, we watch them prepare for an all-out assault on an FBI building. Featuring an array of obnoxious performances (Christian Lloyd’s wonderfully well-tailored performance as the militia leader is fantastically punch-able) who all look like they could easily be wearing Make America Great Again hats, ‘Terror’ pokes at the hornets nest of the American-right with a wry smile and an ironic eye.

Featuring a unique design for a fairly ubiquitous creature in modern cinema, ‘Terror’ is a strong end to the quartet of tales that all offer something unique, unsettling and thrilling. 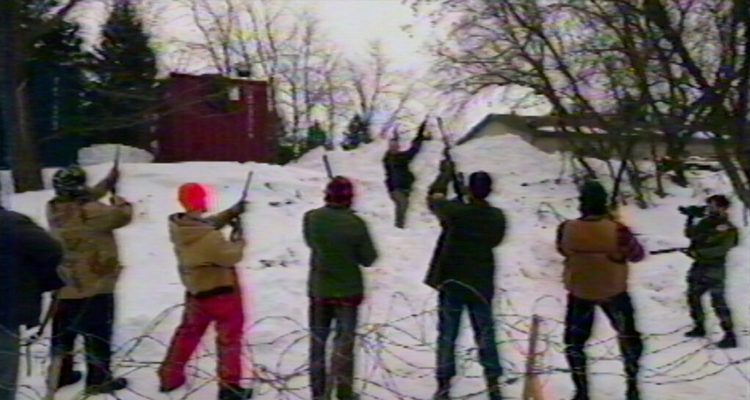 The wrap around story, ‘Holy Hell’, peters out with a bit of a stilted ending that only muddies the waters of the overall piece, but in no way takes away from the power of the individual shorts. An overarching theme of police brutality, corruption and incompetence seems to flavour most of the pieces on display, and with a stronger wrap-around you feel that this may have been a little clearer and a little more biting.

But still, V/H/S/94 is a return to form for the franchise presenting some of the anthology collection’s finest works. Featuring a wide array of horror styling in the found-footage mould, there is a lot to recommend and it will definitely deserve a repeat viewing.

Only, maybe make sure you watch ‘The Subject’ on an empty stomach…

V/H/S/94 is streaming now on Shudder