Josh Ruben’s debut feature film, Scare Me, became something of an instant classic in the horror community. Tapping into a rich vein of horror-comedy in a way that so few directors are able to do, Ruben produced a movie that was full of genuine moments of suspense, tension and proper belly-laughs that lit up the screen.

For his ‘difficult second album’, Ruben delivers a film that is charming, funny and utterly unique whilst defying the sage logic that there is no such thing as a good movie adaptation of a videogame property. Filled with characters both heartfelt and off-the-wall, Werewolves Within pulls viewers into the snowed-in Beaverfield Inn and settles us in for a long, dark night. 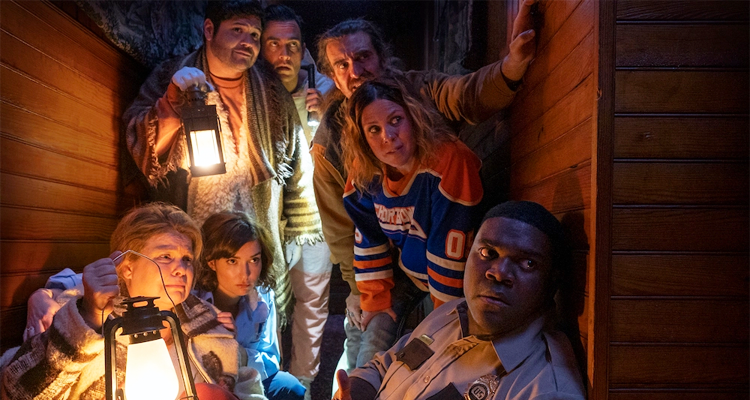 We follow newly appointed Forest Ranger Finn Wheeler (Sam Richardson) as he arrives in the snow-covered mountain town of Beaverfield. There he meets postwoman Cecily (Milana Vayntrub) who introduces him to various colourful characters on her morning rounds. The town is in the midst of an environmental quandary as businessman Sam Parker (Wayne Duvall) tries to buy off the town’s inhabitants to run his pipeline through their idyllic little home. With half the town looking to sell and the others looking to stay, introducing a lycanthrope to the already heightened atmosphere of mistrust and greed only serves to tip things over the edge.

And settled on his own patch of land on the town’s outskirts is the ever-brilliant Glenn Fleshler as loner Emerson, a man-mountain who is very much a mountain-man, looking like he might give any potential werewolves a run for their money. 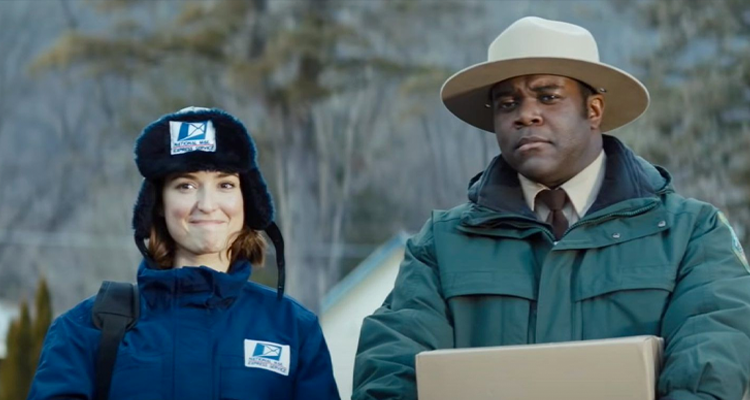 When the power is purposefully cut, causing a blackout in town, the townsfolk hole up in Jeanine’s (Catherine Curtin) guest house for safety, not realising that the real danger may very well be among them.

Werewolves Within announces its off-kilter charms from the get-go; against a black backdrop and ominously building scary music, slowly a quote attributed to that not-quite-a-horror-icon Mr Rogers sprawls across the screen.

“Listening is where love begins: listening to ourselves and then to our neighbors.”

That quote is the beating heart of Ruben’s story, and through Sam Richardson’s relentlessly optimistic and entirely charming Ranger, we are shown that nice guys don’t always finish last. Richardson’s onscreen chemistry with Milana Vayntrub practically sizzles off the screen with both actors bouncing off each-others energy while delivering their whip-smart and charming dialogue. 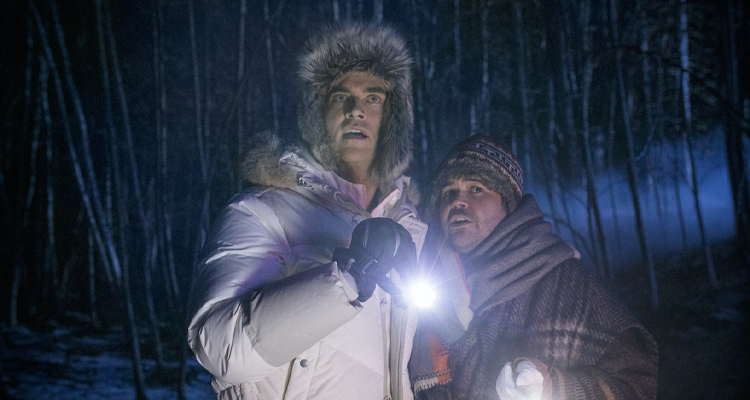 A difficult film to pigeon-hole, it at times feels like a genre infused Ten Little Indians. Only in this instance, instead of looking for a dangerous murderer we are trying to suss out the identity of a murderous werewolf.

It is remarkable that in such a large cast, Ruben manages to pepper the film with brilliant moments for every performer. While the film’s run time means that we don’t get to spend a lot of time with each of our potential lycanthropes, the casting is so strong that each performer really manages to get the most out of the material they are given.

Marcus and Gwen (George Basil & Sarah Burns) crank their redneck lunatics up to eleven, filling their scenes with a giddy madness that provides consistent background laughs in the film. Millionaire tech couple (Cheyenne Jackson & Harvey Guillen) provide excellent light relief as the tension cranks up and the insanity rumbling under the surface of the town erupts (honestly, Harvey Guillen’s comic timing is one of the absolute joys of modern television and cinema). Husband and wife duo Pete (Michael Chernus) and Trish (Michaela Watkins), recently bereaved of their beloved dog Chachi, round out the eclectic group trapped in the inn for the night.

A special mention has to go out to Michaela Watkins brilliant performance as Trish, a woman as proficient with a glue gun as she is with a handgun. Every moment and scene with Watkins crackles with comic energy, and her delivery of almost any line of dialogue raises a giggle with her unusual cadence and unhinged eyes.

The film picks at the very human faults and tensions that pull at the heart of all of us. Our own insecurities, inadequacies and paranoias are all much more destructive than any werewolf could prove to be.

And, without diving into spoiler territory, rest assured that Werewolves Within’s titular beastie is worth the wait. Snarling, blood thirsty and arriving with a transformation scene that would look at home in werewolf classics of old, Ruben creates a unique spin on a traditional monster.

Ruben’s direction is intimate and bold; whilst always willing to give his performers time to deliver, at times his quick edits are reminiscent of a toned-down Sam Raimi. He keeps the film zipping along and gives so much to his performers that you get a sense that everyone is bringing their absolute A-game to proceedings. 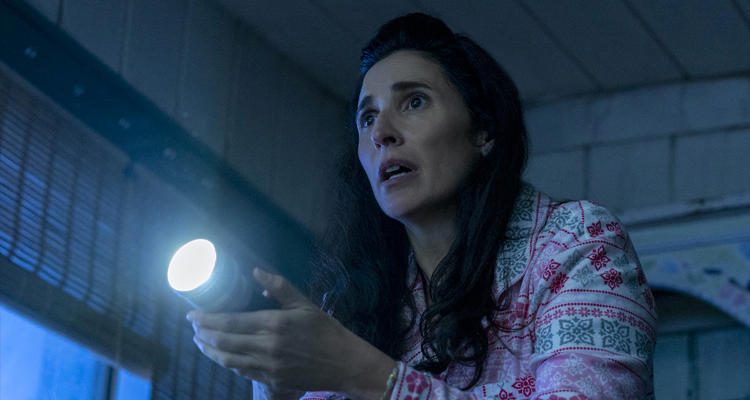 It’s great to see Ruben being given a larger budget after the minor miracles he achieved with only his own talent and Aya Cash’s not inconsiderable genius in Scare Me. While that film announced the arrival of an exciting new name in horror to the world, Werewolves Within feels like a real talent being given the scope to take his work to the next level.

Heavens to Betsy, someone let this guy make the Darkman sequel that the world needs!

Werewolves Within is a film that wears its heart on its sleeve; uninterested in mean-spirited snark and, in spite of the genre trappings, it delivers a tale with a message that is optimistic and heart-warming. And as the final credits roll on a beautifully delivered punchline, the spirit of Mr Rogers will bring a smile to even the most hardened heart.

Werewolves Within is available to rent or buy now on Amazon and Sky Store.