Where’s Rose is a creepy and troubling film that plays on themes of loss, the dangers of adolescent expectations, and the societal masks we adopt to hide the malicious truths that are far more terrifying than any supernatural terrors on screen.

Ty Simpkins (Iron Man 3, Avengers: Endgame) plays Eric, the all-American wonder kid from an affluent middle-class family; handsome, athletic and academically gifted, Eric is ready to spread his wings in the world and head off to college. 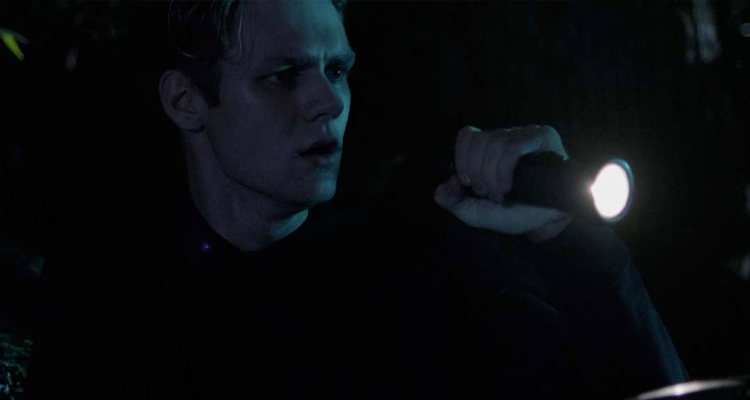 Shortly before he is due to leave, his young sister Rose vanishes from their home while his parents are gone for the evening. Following a harrowing search for the missing girl, she turns up safe and well in the sprawling woods that surround their home; however, Eric isn’t convinced that the little girl they have returned to their home is his sister, and becomes convinced that there is a terrifying force invading his life.

Director John Mathis casts an off-kilter spell over the screen with Where’s Rose, with an engaging premise that is at turns mournful and horrifying. The narrative at times seems filled with gaps and half-truths, creating for a messy and occasionally confusing first act where various character’s motives (and even movements) are hard to track. It is only as the story progresses that we come to understand the importance of these gaps and the neat narrative tricks that are at play, further obfuscating the nature of the tale.

The vast wilderness surrounding the family home is rife with a weird folk-horror vibe, and while Where’s Rose has elements of that ever-growing genre there are moments of pure del Toro fantasy which harken back to films like Pan’s Labyrinth and The Devil’s Backbone. Whilst never quite achieving some of the heights the film reaches for, Mathis is to be commended for his ambition and his vision.

The gorgeous family home is lit beautifully, with Rose’s bedroom in particular filled with a vibrant, giallo-esque palette that only enhances the nightmarish, almost otherworldly feel of the piece.

Ty Simpkins is great in the central role of Eric; oozing with a dangerous, driven energy, Simpkins really creates a character chock full of angry contradictions. At times sympathetic, at times belligerently displaying the very worst aspects of toxic masculinity that are a staple of the American highschool ‘jock’, Simpkins is a terrific screen presence.

Young Skyler Elyse Philpot is great as the titular Rose. Whispering in hushed tones to her invisible friend in the forest, the Rose we meet in the opening act of the film is a kind, loving and troubled child who is terrified at the thought of her big brother going away. The Rose of the rest of the film is an unnerving and upsetting presence who seems malevolently older than is imaginable, brought to vivid life by Philpot’s cherub-like features. 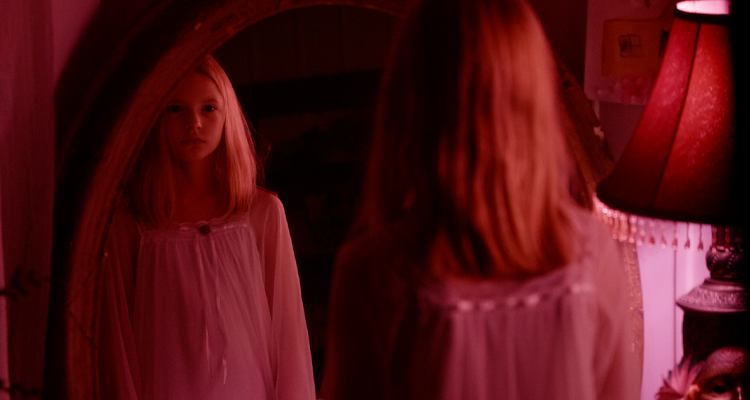 A special mention too for Anneliese Judge who plays Eric’s friend and Rose’s babysitter Jessica. Judge has a limited time in the film to make an impact, but her sorrowful eyes and tortured body-language tell a harrowing story that only becomes more engaging and remarkable with hindsight. Judge leaves a big impression on the audience and the film is all the better for this terrific piece of casting.

The supernatural elements of the film deliver some terrific scares and a nice feeling of a creeping, impossible dread. The arrival of Rose’s invisible friend towards the film’s climax is a highlight of the film, with some gnarly practical effects creating a memorable creature that is worth the wait. It is here that the allusions to del Toro’s work seems at its strongest, and much like the master of terror, the creatures and horror of the story are only masking a deeper, darker reality beneath the fantastical surface.

Where’s Rose is not what it appears to be; whilst there are familiar elements of teen horror mixed with a black-hearted and mystical folk-horror, the societal scabs that the story picks at begin to bleed a poisoned and gripping story rooted in reality by the film’s end. An engaging and ultimately harrowing experience, Where’s Rose takes a trip into the woods to uncover some dark, uncomfortable truths of the human condition.

Where’s Rose is screening at Raindance Film Festival as part of the Screamdance strand on 1st November at Genesis Cinema.

Check out the rest of the Screamdance strand here