Beginning life as a series of comedy web shorts on Youtube, Zomblogalypse transitions to feature length status with a zany, gory and somewhat patchy effort that seems intent on throwing everything up against the gore-encrusted wall to find out what sticks. 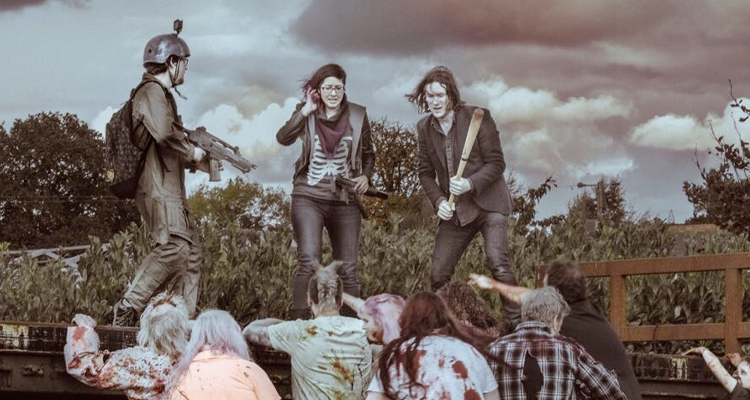 Set ten years into a zombie apocalypse in England, the story follows our three hapless heroes Hannah (Hannah Bungard), Miles (Miles Watts) and Tony (Tony Hipwell). Bored with recording her weekly blog and transmitting to an audience of three, Hannah decides that what the apocalypse really needs is a thrilling action film in which she and her flatmates are the stars. The movie then follows the production of this ‘film within a film’ as the hastily assembled crew fall victim to all manner of gruesome accidents while our trio of egotistical leads endeavour to create the greatest zombie film ever made.

Zomblogalypse’s strength lies in its creativity and willingness to ‘go big’; performances are hammy and ratcheted up to eleven, the gore is the kind of bright, rubbery horror that films of the 70’s and 80’s would have plastered the screen with, and the scattershot humour seems to be aiming at every target in sight.

Packed with great visual gags and silly carnage, the film even finds time, just past the hour mark, to squeeze in a big, gory zombie massacre replete with machine guns, gore and one-liners that would make Arnie blush.

The film is well directed by the trio, delivering a finished product that looks slick and professional. The scenes we see of the ‘film’ the gang are creating look suitably cinematic and make a neat contrast to the documentary/blog shooting style of the rest of the feature.

There is a myriad of influences on screen too; from Romero’s classic zombie output, Edgar Wright’s masterpiece Shaun of the Dead and to perhaps most strongly the Japanese horror sensation One Cut of the Dead. You really get a sense of a love of the genre shining through and the film is stuffed with nods to the heritage of the zombie film history. 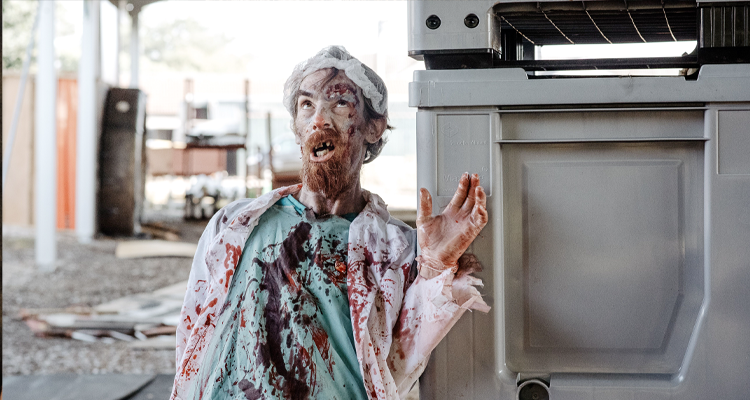 The three leads really ramp up their oblivious narcissism for the film and give strong performances throughout. Their interaction and chemistry hold the central thread of the film together, and while other performances throughout the film may vary in quality, there is a feeling that the silly and stilted deliveries are just adding to the fun.

The film’s observations and pops at low-budget indie filmmaking feel incredibly accurate and familiar to anyone working in the industry, and there is a definite sense of glee among the performers when parodying Kickstarter campaigns with unobtainable perks for unjustifiable costs.

The writing varies in quality throughout Zomblogalypse, and while everyone is clearly giving their all there are scenes and segments that fall a little flat. Some of the dialogue is a feels cliched and the jokes a little too familiar, but there is enough meat on the bones of the script to overlook these missteps. 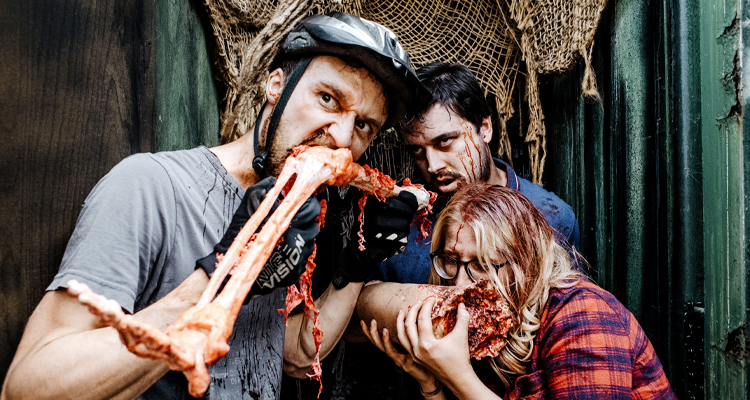 Fans of the original shorts will be in their element, but newcomers will find a lot to like here too with the comedy influences as varied as the horror homages are.

Running at almost one hour forty-five, Zomblogalypse does threaten to fall apart under its own runtime, and it feels like a judicious edit could trim the film down to a sleeker effort running just under ninety minutes. The jokes are funny and the performances just the right side of playful, but the film does run the risk of wearing out its welcome by the end.

Thankfully a thrilling and funny final act of the film brings proceedings to an end with a suitable bang with our heroes having almost certainly learned no lessons and experienced no growth. It is the perfect end to a film that revels in its own silliness, sending the audience home with smiles on their face and bits of gore in their hair.

Zomblogalypse is currently on the festival circuit, keep an eye on their site for news of new screenings.