Hammer House of Horror is a 1980’s British anthology series. It deals with the normal horror tropes of haunted houses, ghosts, and all manner of weird and supernatural experiences.

Each episode is approx. 50 minutes long, with thirteen episodes in total. Like many anthologies, it’s considered a classic. However, anthologies are a sum of their parts and some episodes fall short.

If you’re unsure if you want to revisit the whole series again, here are the five best episodes of the Hammer House of Horror TV Series. 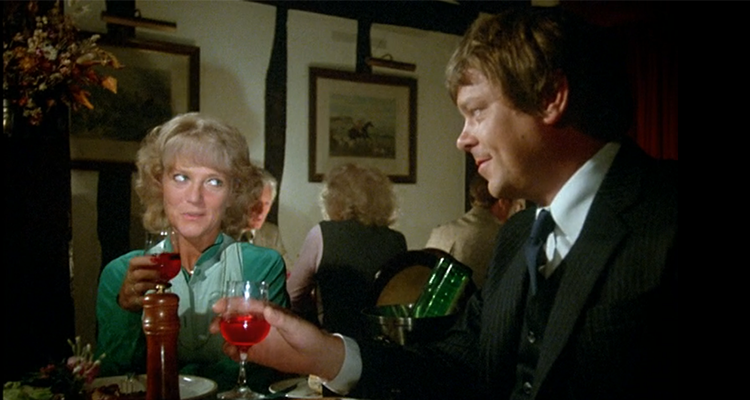 In this episode of Hammer House of Horror, we follow Ruth (Julia Foster), who’s a reporter for a lady’s magazine and is sick and tired of reporting on the everyday. Through her job, she’s sent to the “Think Thin” health retreat that has some questionable practices.

Ruth makes friends with Ben (Warren Clark) who dies the next evening. She suspects foul play but is excited by the fact that she’s on the trail of a big story. At Ben’s funeral, she’s approached by the retreat director, as they believe something weird is happening to the bodies, including Ben’s so they investigate the strange events.

What’s great about this episode is that we don’t know much more than they do. We’re privy to some information that they’re not, but nothing that gives the game away. But stick with it – the ending is why this makes the top five. 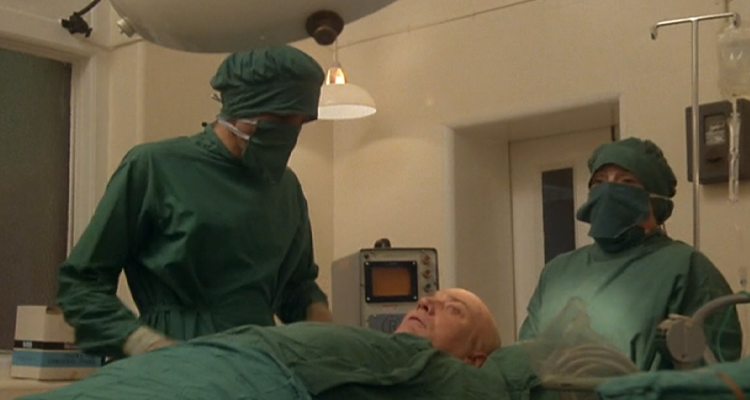 Norman Shenley (Denholm Elliot) is a small-town estate agent, who’s in love with his secretary, Lolly (Lucy Gutteridge) and wants to divorce his wife, Emily (Pat Haywood). There’s a fair bit of nudity, and it distracts from the plot. But, I do enjoy the story.

It picks up the pace when Shenley walks into work and starts to fondle Lolly’s breast, but he’s interrupted by a client (James Laurenson) who wants Shenley to look at a property. What happens at the property isn’t scary, but it does fall into dreamlike qualities.

Shenley wakes in his bed, where we’re introduced to his wife, who knows about his indiscretions. Things soon become complicated, as we’re often left wondering if we’re in a dream or reality .Or even dreams within dreams. However, Shenley soon realises what’s happening, and starts using it to his advantage, highlighting his evolving mental state.

The game he plays is an excellent part of the story, and why I enjoy this episode. The downside is it’s stretched to fit the episode run time, which means the dream sequences are apparent and feel redundant. Like most of the Hammer House of Horror episodes, it’s the calibre of actors that elevates it. The quiet power of Elliot is the pinnacle of this. He carries it entirely from his point of view, and he’s always on the scene. It’s his performance that saves the ending of this episode.

Ultimately, it’s an exciting dream story that would’ve been better if the running time was 30 minutes. But, it’s worth watching for the surgery nightmare, where it’s not clear if Shenley has a brain tumour and needs to be operated on immediately. However, during the surgery, he’s awake but unable to move; a terrifying prospect for anyone. 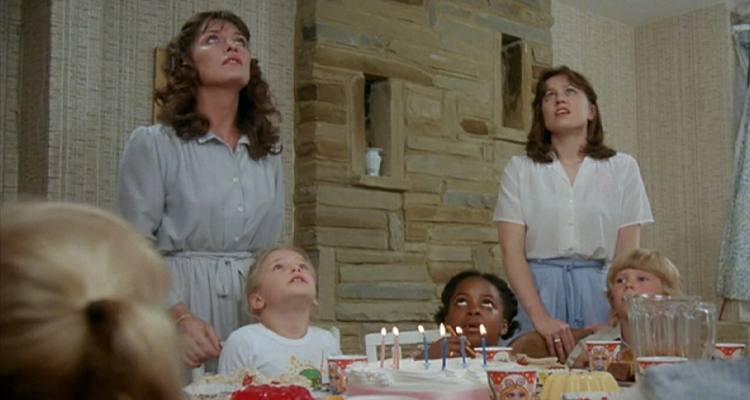 When you speak to people about the Hammer House of Horror TV Series, this is the one that sticks in mind. Most people call the episode “The House That Dripped Blood”, which is a film by Hammer’s rival Amicus.

A house that was the site of murder starts to have supernatural occurrences: a severed head in the fridge, disappearing and reappearing hunting knives, and bleeding walls.

While it can be argued that the influences of this episodes are from Amityville, you can’t help but wonder if the more homegrown horror of the Enfield ghost also influenced this episode. The reason it’s not higher in my list is the tactics used to scare the audience haven’t aged well, especially when you compare it to British classic, Ghostwatch. But, the double twist ending is what makes it great. 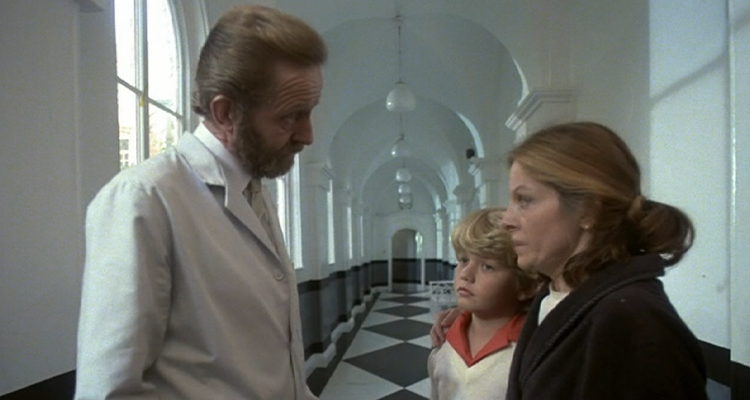 This Hammer House of Horror episode is rather surreal and plays with the notion of identity and doppelgangers. We follow a family: mother (Anna Calder-Marshall), her bothersome husband (Gary Raymond), and their eleven-year-old son (Paul Hawkins) on holiday. During a rainstorm, they pick up a hitchhiker. Of course, we all know this is a mistake. We are heading towards a hospital, a holiday home, and paranoia. The episode is stylised, with camera tricks, perspective shots, and colour schemes.

The hospital is white, unnaturally white, even for a hospital. The audience is also subjected to black and geometric patterns; this colour scheme is also mirrored in the holiday home. Then there are splashes of red: red clothes, hair, and even the blood seems unnaturally red. It’s transfixing. The plot isn’t perfect, as is the case with many Hammer House of Horror episodes,  but the styling hides this by giving us a nightmare-like scenes.

It’s open about the fact that it has plot holes, but the atmosphere it provokes is dreamlike. As the episode goes on, things get less obscure. Even once your eyes are opened to the truth, it becomes even more of a nightmare.

Hawkins’ best moment is his ghoulish fascination with the nurse’s attention to his father’s neck, highlighted by his callous lack of relative response.

The story and imagery stay with you and the styling is why it makes my list. It lacks lovingness; it’s brutal and black. 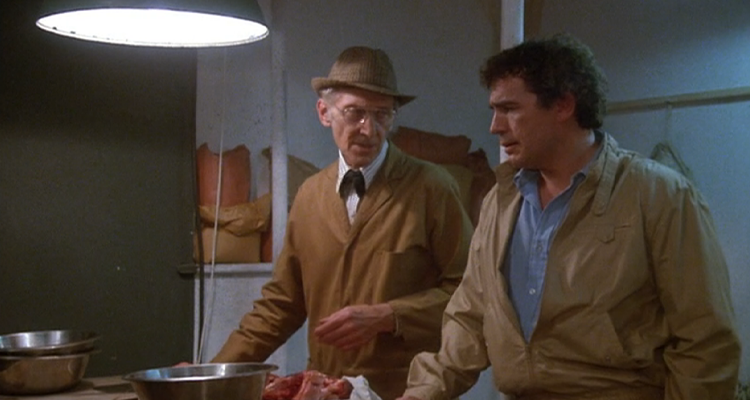 This episode is the closest to a more traditional horror than most other Hammer House of Horror episodes, therefore, it’s the best. It’s a gothic, psychological trip. What makes this one particularly unique? Peter Cushing.

The plot follows Chuck Spillers (Brian Cox) who’s recently been released from prison. The only friend that Spillers had was a seemingly benevolent pet shop owner, Martin Blueck (Cushing) who visited him in prison. Blueck offers Spillers a job, looking after a collection of animals he keeps in his basement. Unsurprisingly Blueck is not all he seems, and we’re soon entering the horror psychology of the episode.

Blueck is a former Nazi, the juxtaposition of him continuing his bizarre experiments in a typical suburban town in the quaint English countryside is jarring. He’s is also a perfect vessel for Cushing’s acting talents. Cushing plays Blueck as feeble, warm, and sympathetic, but occasionally we get glimpses of the strength bubbling beneath the surface. It could be hard to act opposite a talent such as Cushing but Cox more than holds his own. Ellen Donnelly is also great support as Spillers’ wife. It’s a small but stellar cast.

There’s no big twist at the end; it’s predictable but doesn’t take away the impact. It’s a shame that this is Cushing’s only appearance in Hammer House of Horror, but he makes the most of it – it’s what makes it the best episode in the series.

So there you have it. Those are my top 5 episodes of Hammer House of Horror. If you’re thinking about revisiting the series, or watching it for the first time, I hope you find this guide helpful.